Community solar used to be a perk only upper income people could afford. Just as some people spend big bucks to drive a luxury electric car so they can lower their carbon footprint, others were willing to pay a little more for electricity in order to help the planet breathe a little easier.

The Biden administration has made a major commitment to community solar, but wants to take it out of the “feel good” category and make it an effective tool to lower utility bills for low income Americans living in under-served communities. The new Inflation Reduction Act provides a 30% tax credit for community solar developers, but it goes much further than that. According to Canary Media, the IRA also contains a provision that adds an additional 20% tax credit if at least half of the financial benefits accrue to low and moderate income customers.

“A number of years ago, when folks were talking about community solar, they were really talking about a premium product,” said Nicole Steele, senior advisor for equity and workforce at the US Department of Energy’s Solar Energy Technologies Office. ​“They were saying, ​‘I want to make sure my energy is coming from clean energy — I’m willing to pay more for that.’ We’re trying to flip that script and say community solar can be like rooftop solar and reduce your overall utility bill on a monthly basis, really ensuring there are greater household or business savings.”

Steele runs DOE’s National Community Solar Partnership, whose goal is for community solar to power the equivalent of 5 million households and create $1 billion in energy savings for subscribers by 2025. That will require about 20 gigawatts of community solar deployment, compared to the approximately 5.1 gigawatts installed as of the end of September.

The administration’s Justice40 Initiative seeks to direct 40% of federal climate related funds to disadvantaged communities. That will require the development of community solar projects that adhere to a number of standards. They will need to be accessible by low and moderate income households and ensure the affected households realize actual energy savings.

It also means projects that offer ​“equitable workforce development” and give community organizations options to own solar projects themselves as a way to cement the employment and wealth building value of these multi-million dollar investments in the communities they serve. 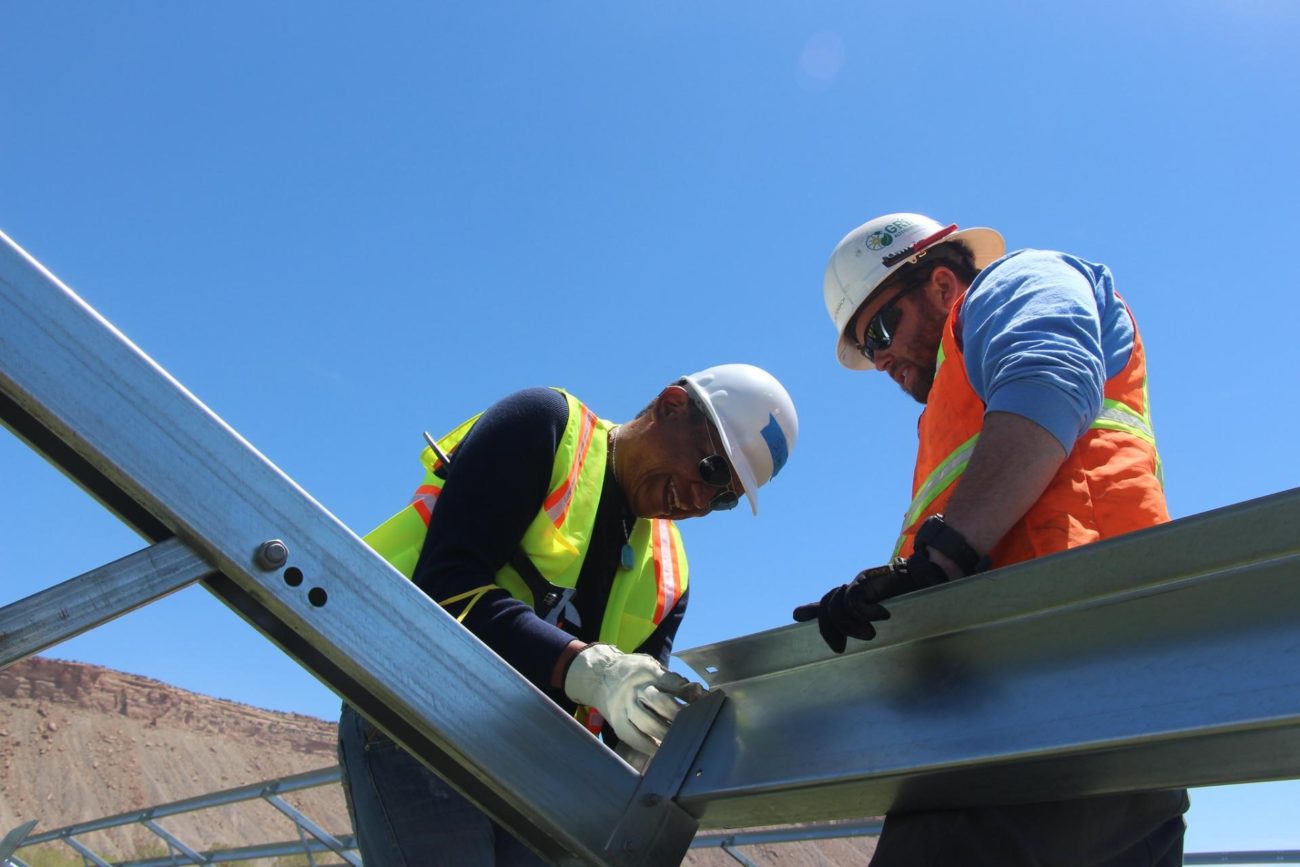 The National Renewable Energy Lab estimates about half of US households aren’t suited for cost effective rooftop solar, either because they rent or because their roofs aren’t a good match for solar panels due to shading, orientation, or construction type. But according to Solstice Power Technologies, which works with solar developers to connect them to customers in disadvantaged communities, the true number is closer to 80% of all US households.

The biggest factor barring households from getting rooftop solar is they lack the debt to income ratios or high credit ratings needed to meet the borrowing criteria required by most solar installers and lenders. Solstice co-founder Sandhya Murali said that some of the same income and credit barriers to rooftop solar access have plagued community solar.

When Solstice launched six years ago, ​“the community solar products looked like rooftop solar products,” she said. ​“You needed to sign a 20-year contract. You needed a really high FICO score to participate. There were sometimes four digit cancellation fees.” Community solar developers continue to have trouble getting financiers to back projects that are targeting lower income customers and customers with poor credit scores, she said.

Solstice is working to get lenders to consider what it calls an EnergyScore, which tracks not only credit history but also a customer’s history of paying their utility bills. Studies have shown that utility bill history is an effective proxy for how likely customers are to stay current on their solar payments.

“Financing can always be a barrier,” she said. ​If there are restrictions placed on the projects where they require a FICO credit requirement, or they require a certain number of commercial entities, that limits participation from low or moderate income customers. To overcome that, ​“financiers have to change how they think about the risk of these projects,” she said.

Customer acquisition — the industry term for finding willing customers — can be a significant cost for community solar developers. Anything that makes it easier for them to find, vet, and approve low income customers as community solar subscribers is welcome. A new federal digital platform will help more than 5 million recipients of federal Low Income Home Energy Assistance Program funds connect with community solar programs in their region. It is set to launch next year in Colorado, Illinois, New Jersey, New Mexico, New York, and Washington, D.C. Jobs are another important part of the Biden administration’s community solar goals, Steele said. The NCSP is looking for partners that have plans for ​“the creation of a workforce that’s inclusive and intentional, and has a pathway for workers to unionize.” That’s one of the primary goals of Reactivate, a recently launched energy asset developer.

“We are really focusing on a holistic view,” said Utopia Hill, the company’s head of engineering, procurement and construction. Reactivate partners with local community and government groups to find workers and contractors for its projects. It actively seeks partnerships with business owned by women and minorities and offers 16-week paid training programs that include ​“wraparound services” such as transportation to and from job sites.

The company also plans to conduct followup interviews with workers for years after those projects are complete. ​“We’re looking at not just jobs, but sustainable careers, so that people have living wages so they can support their families.”

These kinds of commitments help gain community buy-in for projects, Hill said. It’s also important to build trust in communities that may become the targets of unscrupulous developers chasing federal and state incentives, she added. “Underrepresented communities may get this influx of people coming in and promising things that aren’t true. They’ve been flat out lied to before. If certain actors come in there and are not following through on what they say, they’re hurting the industry at large.”

Then there’s the question of whether community groups ought to take on the role of owning community solar projects themselves, Steele said. The Inflation Reduction Act makes solar and other clean energy tax credits more easily accessible to municipalities, nonprofit groups, and other tax-exempt entities. Previously those credits were available only to private companies because you had to have tax liability to defray in order to apply them, but now not-for-profit entities can receive the incentives in the form of direct payments from the federal government.

That’s a major shift that could expand community ownership options in the years to come. Carla Walker, director of environmental justice and equity at the World Resources Institute, noted that community ownership can be an important way for communities that have suffered from generations of disinvestment (also known as redlining) to begin ​“building equity and rebuilding wealth.”

“Ownership is a huge topic of conversation,” Steele said. ​“It’s the same with rooftop solar. Do you want to own the solar on your roof, or do you want to rent or lease it, enter into a power-purchase agreement? We want it to be the same with community solar. You have the choice of either owning and building wealth through that business model or being a subscriber. It’s about choice.”

Community solar can be a great alternative for those who cannot install a solar system on their roof for whatever reason, but it typically benefits higher income families. The Biden administration wants to make it a tool to re-energize and revitalize under-served communities by giving them a stake in their energy future.

But there’s more to lowering utility costs. In Kentucky, Habitat For Humanity is helping low income residents save energy by getting them access to programs that upgrade windows, doors, heating equipment, and air conditioners so the electricity they pay for doesn’t just wind up leaking into the outdoors. Those upgrades have lowered utility bills by up to 50% in some instances.

Let’s be honest. 97.625% of all government spending goes to serve the desires of those who need government help the least. The Biden administration’s National Community Solar Partnership seeks to put more money into helping people who need it the most. With the incentives provided by the Inflation Reduction Act, we can expect a marked increase in community solar projects this decade.

Don't want to miss a cleantech story? Sign up for daily news updates from CleanTechnica on email. Or follow us on Google News! Have a tip for CleanTechnica, want to advertise, or want to suggest a guest for our CleanTech Talk podcast? Contact us here.
In this article:Inflation Reduction Act of 2022, Justice40 Initiative, US