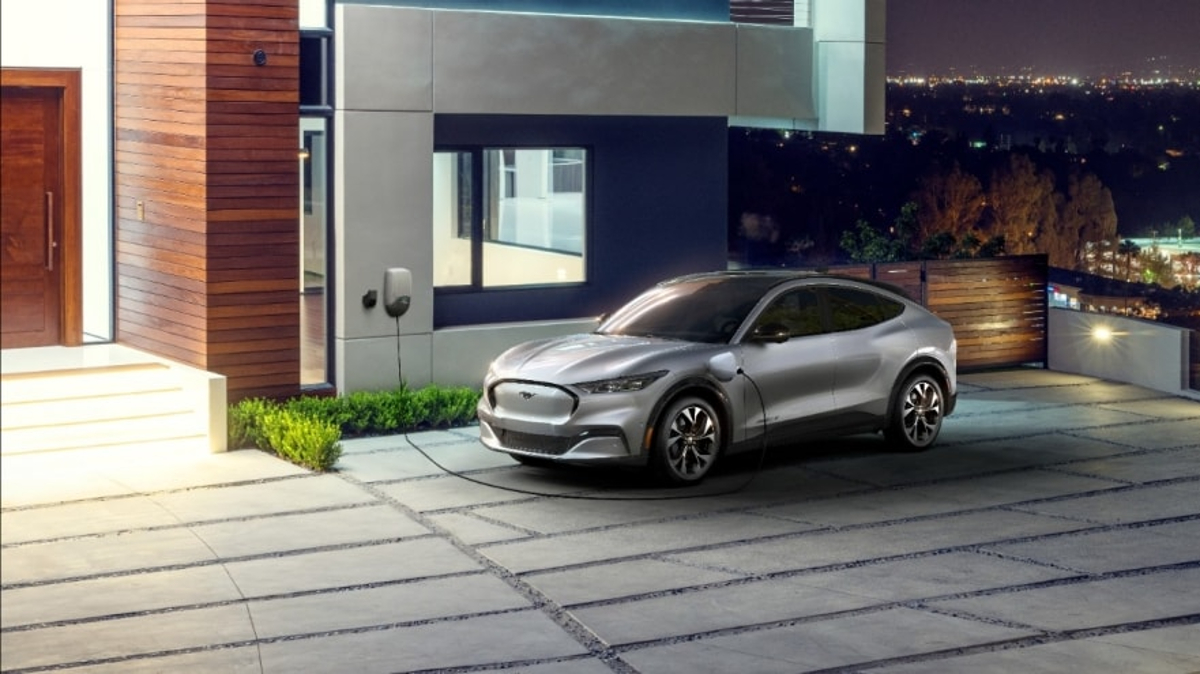 Yesterday, we told our readers that Ford CEO Jim Farley was traveling to Las Vegas to deliver a message at the annual convention of Ford dealers. We thought he was going to make nice with the dealers, but instead he dropped a bomb on them. Here’s the message Farley brought with him to Sin City:

When it comes to selling battery electric Ford products that are part of the new Model E division, you’re either on the bus or off the bus and you have just 6 weeks to decide.

BOOM! Just like that, the EV revolution took a giant step forward and things will never be quite the same in the land of the Blue Oval. Ford has restructured its business recently by separating its operations into three divisions, called Ford Blue Oval for its traditional vehicle sales, Ford Pro to cater to commercial customers, and Ford Model e to focus on battery electric vehicles. To clarify, all Ford hybrid and plug-in hybrid models will be marketed by the Blue Oval side of the business. Those distinctions will be important to have in mind as you read more about Farley’s remarks yesterday.

Farley told the dealers they have until October 31 to choose one of three options:

According to Inside EVs, whose correspondent Tom Moloughney was part of a very small press corps at the event, Model e Certified Elite dealers will be required to install two DC fast chargers and a Level 2 charging station. At least one of those DC fast chargers will need to be available to members of the public. Ford estimates the cost of doing so will be between $1.0 and $1.2 million, with up to 90% of that amount attributed to the purchase and installation of the required charging infrastructure.

[Note: The US Department of Energy says the cost of installing a DC fast charger is around $50,000. According to Property Manager Insider, a DC fast charger installation costs between $28,000 and $140,000. If anyone thinks it will cost up to $1 million to add two DC fast chargers and a simple Level 2 charger to a Ford dealership, we have a bridge in Brooklyn that we would like to sell you.]

Tom Moloughey reports that Ford hasn’t decided exactly what that hard cap will be, but it will be small and intended only to satisfy orders for the dealer’s most loyal customers. Ford estimates the cost for dealers to become Model e Certified dealer will be about $500,000, with as much as 90% of the cost attributed to charging infrastructure. [And again, if anyone thinks one fast charger costs nearly a half million dollars, we will sell you the Brooklyn Bridge and some ocean front land in Arizona. Cash only. No checks.]

The rationale for the fast chargers — which must have a capacity of 120 kW or more — is that lots of people who live in condos or apartment buildings have no access to chargers. Over 90% of Americans live within 25 miles of a Ford dealer, so if all those dealers have at least one fast charger, potential customers will be comforted by that fact and may decide to buy a Ford electric car. That’s the theory, at least.

Dealers who choose not to become Model e Certified will give up the right to sell any fully electric Ford vehicles for three years. At some point in 2025, they will have the opportunity to tell Ford whether they wish to become a Model e Certified or Model e Certified Elite dealership and will be allowed to start selling EVs in January 2027 — provided they complete all the requirements of the certification process.

Ford explains that its Model E dealership strategy will be built upon five pillars:

No-Haggle Pricing, But Not Direct Sales Older readers may recall an experiment GM tried in the 90s with its upstart Saturn division. Its key feature was no haggling over prices. Everyone got the same deal. Some people actually enjoy arm wrestling with a sales person like they were buying an Oriental rug at a bazaar, and they were free to go down the street and play those macho games. But if you wanted a Saturn, it cost the same whether you lived in Albuquerque or Altoona, whether you were male or female, young or old, rich or poor. The price was the price and lots of people were pretty happy with that.

Now Ford is embracing a version of the no haggle model for the battery-electric cars it will sell through its Model e division. The dealer franchise laws prevent Ford from selling those vehicles directly to consumers, but Ford believes its dealer network is a strength, not a weakness. It just needs to improve the sales process and customer experience with electric vehicles.

Model e Certified dealers will have to post set prices for the electric vehicles online at Ford’s website. Customers can view the set pricing, complete the purchase online, and even schedule home delivery. But ultimately, it’s the dealer’s decision what price to set for the vehicles and there will likely be price variation from dealer to dealer.

Customers will be able to cross-shop different local dealers’ prices online and choose the one with the lowest set price. The dealers must honor the set pricing for every purchase and Ford will be checking the purchase orders to make sure that happens, Moloughney says.

Customers can do everything online or visit a dealer if the wish. But once there, the dealer will be locked in to the price it has posted online. No funny business allowed.

A Shout Out To Tesla

Farley told the dealers he is seeing a convergence between tradition sales models and the online model pioneered by Tesla. “We’ve been studying Tesla closely, especially with how their brand has scaled with units and operations in Norway and what we’ve noticed is that they have almost 1,200 employees now and they have very much dealer-like facilities and we think that’s the direction they’ll go as they scale their operations in the United States.”

He’s not wrong. Recently Tesla has been adding larger showrooms that look a lot like a traditional dealership, starting with its new $2.5 million facility in Austin, Texas. Ford may have spotted a new trend and is ready to embrace it.

Moloughney says the mood among dealers at the convention was upbeat, but the devil is always in the details. Time will tell how well the new Ford sales strategy works in practice. It will also be interesting to see how other major manufacturers which do business in the US react to the new Ford initiative. General Motors has offered cash to its Cadillac and Buick dealers who don’t want to be part of the EV revolution. Ford is taking a different tack.

The internet has irrevocably altered how everything is sold, which is why malls all across America have so many vacant store fronts. Everything from laundry detergent to dog food is sold online today and delivered directly to your door.

We can expect some dealers to be unhappy with the changes and there might be a lawsuit or two over this, but it’s really, really hard to deflect the winds of change. New ways of doing business are coming to the world of automobiles and Ford seems to have a credible strategy for taking advantage of them.

Appreciate CleanTechnica’s originality and cleantech news coverage? Consider becoming a CleanTechnica Member, Supporter, Technician, or Ambassador — or a patron on Patreon. Don't want to miss a cleantech story? Sign up for daily news updates from CleanTechnica on email. Or follow us on Google News! Have a tip for CleanTechnica, want to advertise, or want to suggest a guest for our CleanTech Talk podcast? Contact us here.
In this article:Ford