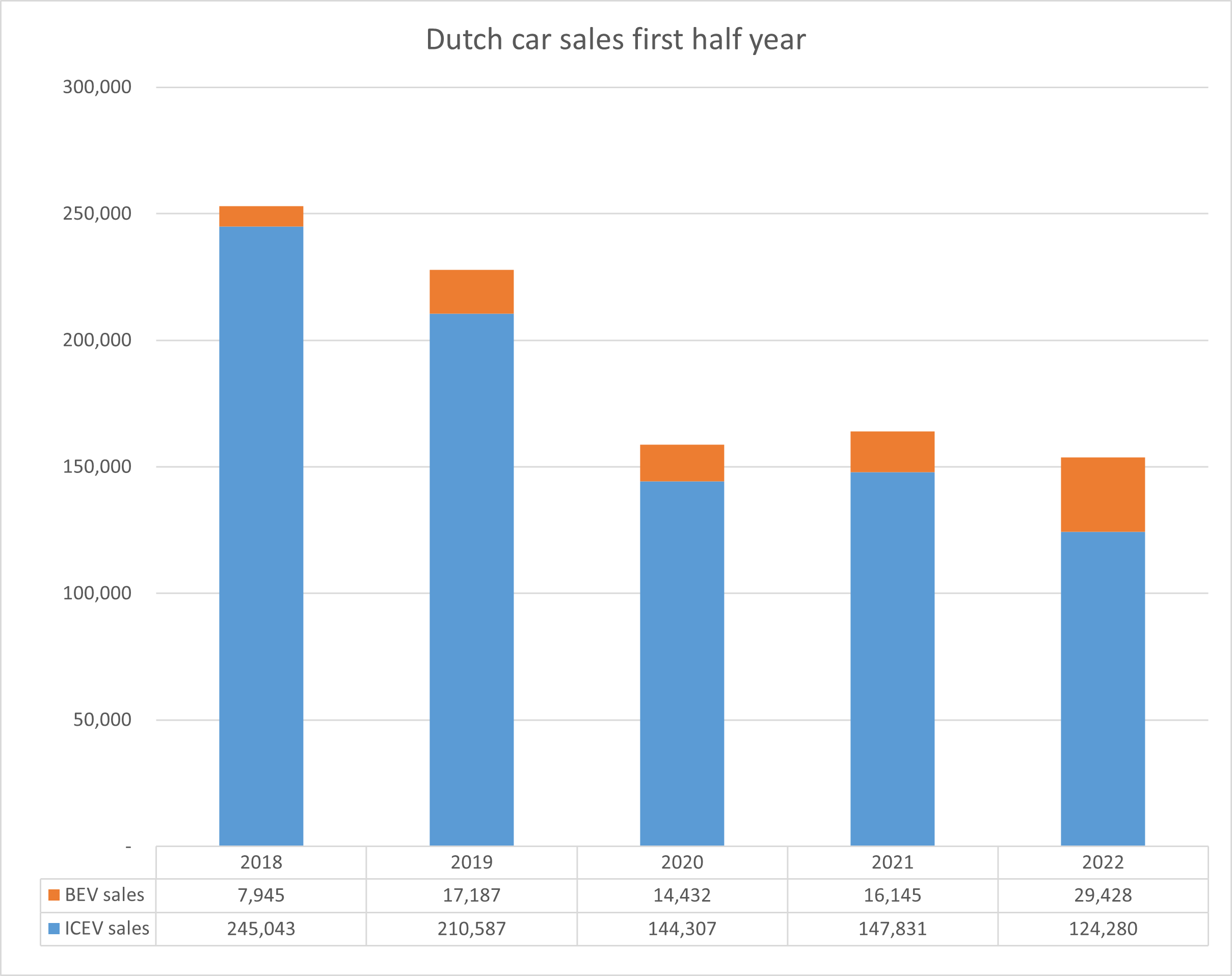 In 2020, the Covid-19 disruption influenced both market segments. BEVs grew a meager 19% and ICE vehicles dropped a whopping 27%. Lowering of taxes and EU fines for not selling enough BEVs caused carmakers to register many thousands of unsold cars as 2020 deliveries, creating a reservoir of BEVs that had to be sold in early 2021, often with nice discounts.

BEV sales in 2021 started very slow. At the end of the year, the now customary end-of-year spike was also lower. The result was a drop in BEV sales, both in volume as in market share, one of the very few countries in the world where this happened. It was BEVs down 12% and ICEVs down 8%.

This year looks to get back to normal. In the first half, BEVs grew 82% and ICEVs dropped 16%, a clear shift to BEVs in an overall shrinking market.

The shrinking market this year is probably mainly caused by supply issues — the chips shortages, the transportation problems with not enough capacity for containers from Asia to Europe, the Ukrainian suppliers that saw factories closed by bombs and personnel going to the frontlines or fleeing to safer places.

There is enough money to see a booming market, even with the currently high inflation rates. The sales figures are coming back, but delivery is often many months in the future, giving the impression of a shrinking market.

The main subsidy — a lower benefit in kind (BiK) tax for company cars — is fixed for this year and for the next two years. No big end-of-year spikes are expected this year or next year. The BiK incentive is for about 60% of the new car market and is not limited in the budget. The other 40% has a cash bonus about half the value and with a small budget — only for the early birds. The rest have nothing or should wait for next year. Both incentives are too small to make a real difference but will help to ease the decision to go electric. The shift can start accelerating with the new models that will reach the market later this year and next year. Looking at new models like the MG5 and the Renault Megane E-Tech, we see an increase in efficiency and a better price level compared to the models from just two years ago.

What models and brands are the most popular in the Dutch market, I leave to the articles my colleague José Pontes writes. He is far better at that part of reporting that I am. One spoiler I can reveal: Tesla is not the Dutch champion it used to be anymore. There are already too many Tesla cars on the road and too few models and versions to choose from, and they are too expensive.

There are a number of Chinese brands coming to Europe. NIO and XPeng are in the upper regions of the market, but the Ora Funky Cat, as shown in Oslo at EVS35, can also push pressure on the European carmakers to try harder at making what the public likes to buy — affordable cars. 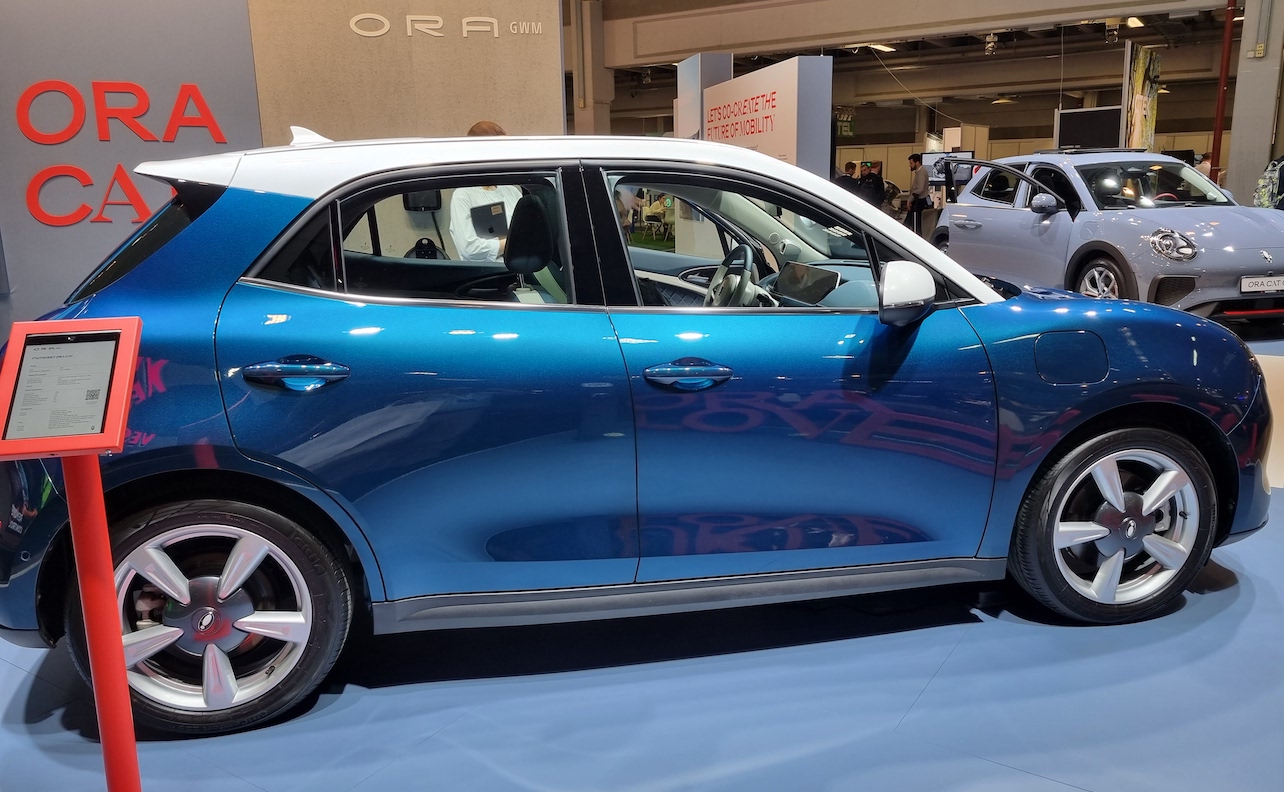 The Dutch automotive sector, organized in RAI and BOVAG, expected a sales volume of 390,000 vehicles for 2022. After the registration of only 153,000 in the first half, a boom to 240,000 in the second half is unrealistic to expect. Delays in deliveries are happening across Europe and even worldwide. The production capacity especially for BEV models just does not exist. Only part of the current backlog can be delivered in the second half of the year. The market and public deserve a more realist prognosis.

Appreciate CleanTechnica’s originality and cleantech news coverage? Consider becoming a CleanTechnica Member, Supporter, Technician, or Ambassador — or a patron on Patreon. Don't want to miss a cleantech story? Sign up for daily news updates from CleanTechnica on email. Or follow us on Google News! Have a tip for CleanTechnica, want to advertise, or want to suggest a guest for our CleanTech Talk podcast? Contact us here.
In this article:EV sales, Netherlands EV sales, NIO, Ora Cat, XPENG