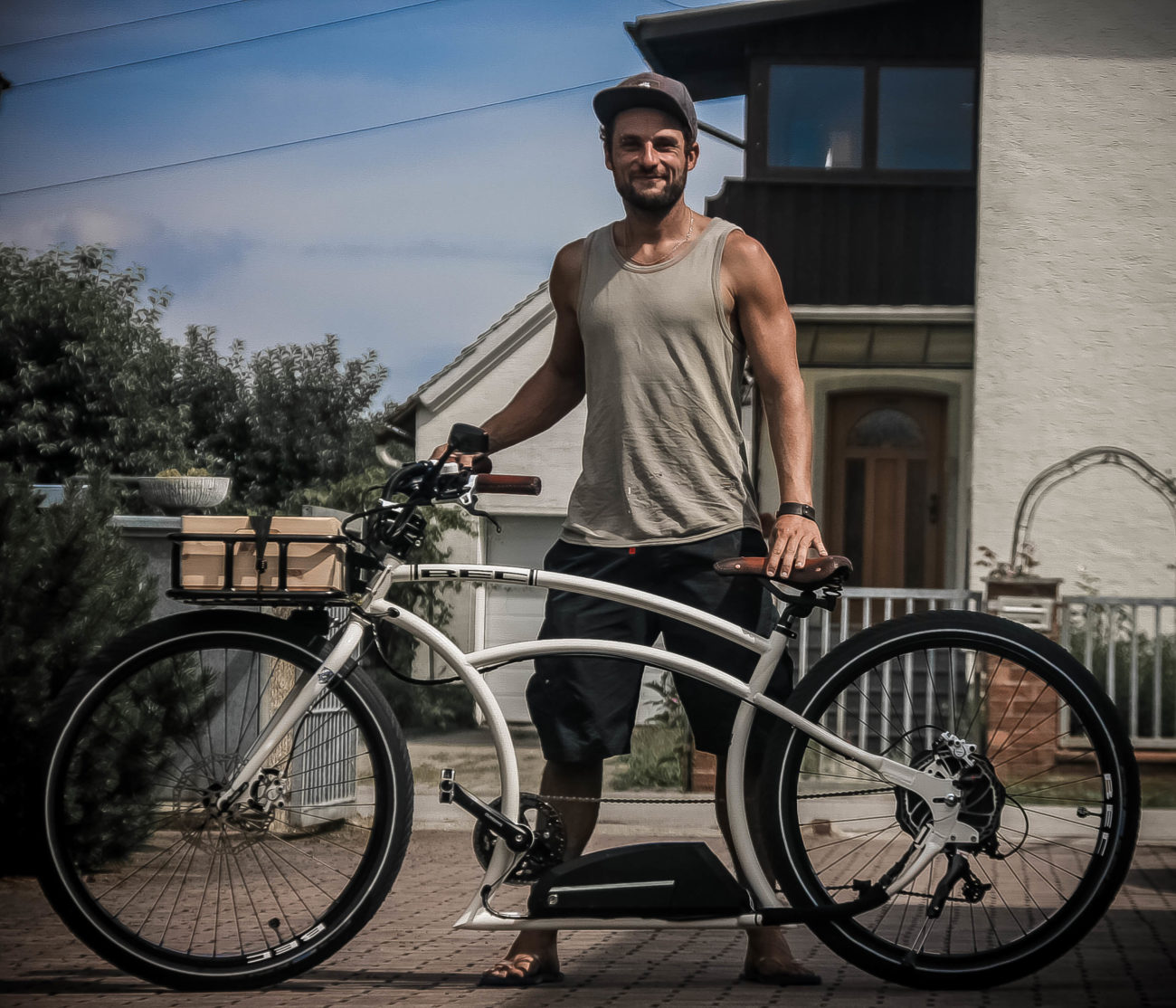 It seems as if The Royal We ruffled a few feathers in the Harley-Davidson community with our take on the Serial 1, and that’s OK. Motorcycles are emotional things, and none, arguably, inspire more emotion than Harleys. That’s how it should be. Still, every now and then we get a message that stands out — like the one we got from Hadrien Dorfman, the founder of Bavarian Electric Cycles. We’ve come to like the guy, and would like to introduce him properly, though, so here goes: Hadrien Dorfman is building the e-bike you want, if you want a Harley-Davidson e-bike. “You know, I really like Harleys,” Hadrien told me. “The old ones. The dirty ones.” And, just like that, we made a friend. That’s the truly great thing about motorcycles — especially old ones. The brotherhood and the camaraderie is something that has to be experienced, we think, but it’s a real thing. What’s more, it’s a real thing that has some subtle and unspoken rules. Can we roll up to a bar on bike night riding a matte black, steel-bodied Vespa and feel right at home? Sure. Would we feel the same way on a shiny, plastic, GY6-powered Taiwanese scooter? Probably not. On a (stock) Serial 1 MOSH/CTY? Definitely not … but one of Hadrien’s bikes? Absolutely.

“The audacity and true nice mechanic-love is not something one should await from big companies,” explained Hadrien, as we talked about Serial 1’s “heritage” marketing stunt. “That’s, unfortunately, how the world has become … (but not me), I build my company alone, without capital. Special bikes for special people.” The way it works is fairly simple. Someone finds Hadrien online — usually through Facebook or Instagram or some other social media outlet — and they reach out. Now and then they want exactly the bike they saw in the picture, but they usually want something unique to them. “So there is a basis, and the client ask for what he wants. And, me, I check if it’s doable, find a compromise, and build it.”

“Doable” is the key word there, of course. Some people are, as Hadrien put it, “very, ‘hold ma beer’ types” who always ask for more power and more speed and just more, in general. “Originally, it’s 1500w which is totally enough,” he says. “Inside that, actually just one motor 20kw … and just one gear. Because they are cruisers, just get on and ride. After a certain amount of power, it sucks. It’s physics.” And, to his credit, Hadrien actually seems to believe this; he’s actively trying to talk us down from building a dual-motor, 2WD cruiser as we type this.  (We’ll let you know how that goes, later.) There’s something worth noting here, as we check out some of the Bavarian Electric Cycles builds, and that is that these bikes aren’t designed to have a wide audience. They’re niche — maybe niche-within-a-niche — and that is absolutely not the market that Harley-Davidson is going for with Serial 1.

“If you look at Amsterdam and you look at Europe, these are the kinds of bikes people are buying,” said Aaron Frank, the brand director of Serial 1, in a phone call we had after the original op-ed piece on the Serial 1 hit. “We’ve done the research,” he said, making it crystal clear that Serial 1 had global ambitions and sales targets in the tens of thousands of unit, at least (we’re paraphrasing, but we stand by the quotes).

Aaron seems like a good dude, and he’s intent on making Serial 1 a success by being an e-bike brand that happens to be owned by Harley-Davidson, not a Harley-Davidson e-bike brand. In our time with him (about 40 minutes, give or take) he seemed educated, sharp, and absolutely on top of what was happening at the independent bicycle dealer (IBD) level. “Go into your local bike store and see if they have any e-bikes like this in stock in the four-to-five thousand dollar range,” he offered. “They don’t.”

He’s right about that. Still, it’s not exactly fair for us to paint a picture of Aaron as a marketing-driven, number crunching bean-counter who’s willing to trade a bike’s soul for sales. After all, he’s the guy that hand-built the Serial 1 heritage model that we fell in love with just a few months ago! “That’s a MOSH/CTY under there, everything we did to that bike you can do to your MOSH/CTY,” he said, after explaining that I’d got it a bit wrong. Those are nickle-plated parts, not brass, and it’s not black lacquer — just glossy paint. There was one detail I didn’t expect, though, as Aaron laid out the basic how-tos of the build. “The tires are painted,” he told me. “We couldn’t find white tires in the right size, so we had to paint them.”

“There was one thing you got dead-on, though,” says Frank. “The price. If we were to sell that Heritage bike, that way, it would be about ten grand.”

Ten thousand US American dollars for a bike like the Serial 1 Heritage (which is what we’ve decided to call it) sounds doable to me, especially with some low-interest financing and access to Harley’s massive dealer network for service and support. But for that money, we might just keep trying to convince Hadrien to hold our beer. Just look at some of these detail shots of the Bavarian Electric Cycles below to get a sense of the “mechanic-love” that goes into these bikes. Did we say ten thousand dollars? Because the Bavarian Electric Cycles don’t cost anywhere near that much. “I’m too cheap!” exclaimed Hadrien, when we asked him about the €4899 price on his site for a Vintage Custom XXL 2020. “I sell locally, and it (has been) really, really hard to start my business.” For Hadrien’s sake, we hope the custom e-bike business picks up, because the guy is an artist who fully deserves a wider audience. That said, it’s very likely that the idea of a low-slung, hand-built electric motorcycle won’t ever be hugely popular — at any price. It might be a “special bikes for special people” kind of thing. Besides, you get the sense that if Aaron Frank and the guys at Serial 1 don’t think a cruiser-style bike is the way forward, it very probably really definitely isn’t. “Nobody wanted an electric Harley ‘wanabee’,” says Hadrien. “Not even Harley!”

It’s hard to argue with that.

What do you guys think? Does Bavarian Electric Cycles’ photo gallery send your mind spinning into hundreds of thoughts of what could be? Are your tastes a little less chopper-y, and a little more moped-y? Scroll on down to the comments section and let us know what you think of Hadrien’s work, and maybe toss him a Like on Facebook. Don't want to miss a cleantech story? Sign up for daily news updates from CleanTechnica on email. Or follow us on Google News! Have a tip for CleanTechnica, want to advertise, or want to suggest a guest for our CleanTech Talk podcast? Contact us here.
In this article:Bavarian eBikes, Bavarian Electric Cycles, custom, custom ebike, Hadrien Dorfman, Harley-Davidson (Harley), Serial 1