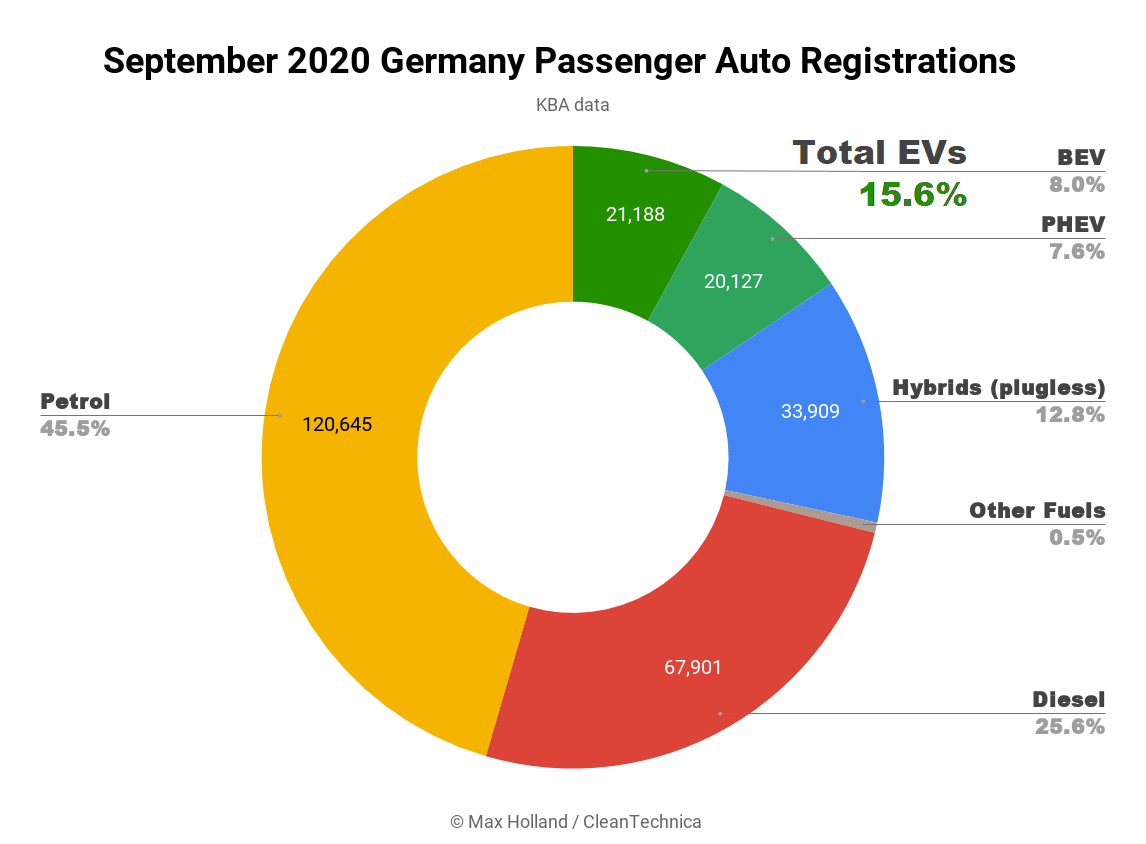 We don’t yet have good detail on the best selling plugin models in September, but Renault have put out a press release stating that the ZOE sold 3,600 units in Germany in September:

“…sales doubled to 15,731 units (2019: 7,872) compared to the same period of the previous year from January to September. 3,600 registrations in September alone represent a new monthly record. This means that the electric model remains the best-selling electric car on the German market.” Renault press release (translated)

The fact that Renault say the ZOE “remains the best-selling electric car” echoes the language that sibling company Nissan previously used to describe the LEAF. Once the Tesla Model 3 production got going in decent volumes (from spring 2018) this was no longer strictly true of the Nissan LEAF.

From that time on, and for a while longer, the LEAF could still claim to hold the title of the “most sold” (past tense) on a historical cumulative basis, but was no longer correctly described as the “best selling” (present tense). This didn’t stop Nissan from using the phrase however.

Since early 2020, the Tesla Model 3 overtook the LEAF even on cumulative total, so Nissan no longer makes any such claims. That Renault are now employing the same “remains the best selling” language suggests to me that another BEV model may actually have had more unit sales than the ZOE in Germany in September. This can’t be the Tesla Model 3 this time around (KBA data records Tesla brand sales at 3065 total in the month, most of which are surely the Model 3).

The obvious BEV candidate that may have achieved more German sales in September is the Volkswagen ID.3. We know that the newcomer scored a strong 1989 unit sales in Norway in September. Could the ID.3 have garnered over 3,600 unit sales in the homeland? It seems very possible, but we don’t yet have any solid data one way or another.

What we can say is that the Renault ZOE scored 3,600 sales, the Tesla Model 3 got close to 3,000 sales, and the VW ID.3 probably got close to these two, if not higher. Other recent favourite BEVs in Germany have reliably included the VW e-Golf; Hyundai Kona; VW e-Up!; Audi e-tron; Smart Fortwo; and BMW i3. The VW e-Golf still likely has some inventory to move, but will obviously soon bow out to the VW ID.3. All the other recent favourites will likely have made good sales in September as usual.

The new Polestar 2, although not yet appearing on the KBA brand list, will likely have scored at least a couple of hundred sales in September.

Look out for Jose’s more detailed model data later in the month. Germany’s respected auto industry research center, the center for automotive management, has responded to the September result by predicting that full year 2020 plugin unit sales should reach 300,000 units, which will correspond to 10.7% market share.

To me that seems a bit conservative, since we are already at 10.0% cumulative share, and historically the last 3 months of the year tend to achieve at least the same market share as the month of September does. Thus Q4 would thus seem likely to maintain results in the range of 15% to 16%. With Q4’s unit volumes likely to outweigh those of the lockdown months, I would guesstimate that a share of over 11% and perhaps closer to 12% is possible for the full year. This will amount to almost a 4x gain in market share over full year 2019 (3.0%).

Am I being too optimistic? What’s your thinking on Germany’s likely final 2020 plugin market share? Please jump in to the comments to share your perspective.