There are some significant differences with regard to the plug-in electric vehicles that sell the best in Europe and those that sell the best in the USA. While differences with regard to range needs and costs are part of the drivers for these differences (note that the average European drives approximately half as much as the average American over the course of a year), they are by no means the only ones. Questions of national bias, government incentives, and public image all come into play as well, amongst others. 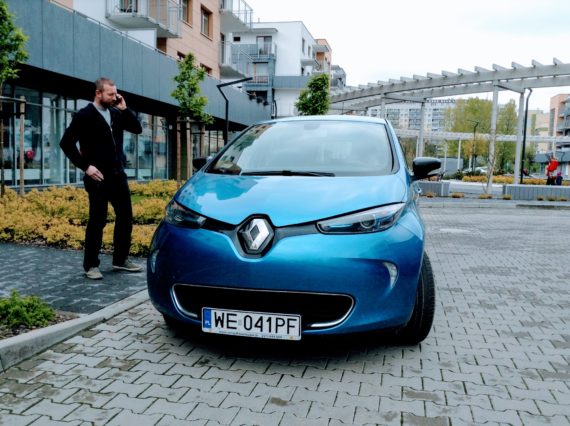 The thing to keep in mind when dealing with plug-in electric vehicle sales trends is that, since aspects of the technology are still improving so rapidly (battery tech in particular), when it’s announced that an upcoming model year will possess a greatly improved range, or a lower price, sales of the current model year generally fall off a cliff.

So, when that’s taken into consideration, it’s best to not take the sales figures of individual months too seriously, but rather to look at broader sales trends. The rankings listed here reflect that for a decent period of time — you could go further and do this for a period of a few years.

All of that said, as you can see above, the Renault Zoe is listed as being the top selling electric vehicle model in Europe, with the sales total in the market for the first 9 months of 2017 being around 24,000 — some 9,000 higher than those of the runner up. So, it seems fair to say that the Renault Zoe is the undisputed sales leader in Europe — even if recent months have seen the Tesla Model S, the Tesla Model X, and the Volkswagen e-Golf do quite well and gain ground on the model.

So, why is the Renault Zoe the best selling electric car in Europe? Why does it sell better than Tesla’s offerings? Well, it’s noteworthy here that Tesla’s sales in Europe are reportedly production constrained, not demand constrained. Also, the only major market that Renault sells the Zoe in is Europe, whereas Tesla sells globally (and moves quite a lot of units by that metric).

It’s also noteworthy, though, that the Renault Zoe is a much more affordable car by most people’s standards than the Tesla Model S or Model X. While people wait for the Model 3, the Model S and Model X are just too far out of the price range of an average buyer. Another key factor is likely the large size of the Tesla Model S (and the Model X, for that matter). The Renault Zoe, being a much smaller car, is better suited to navigate the tiny, old streets of some European cities.

It’ll be interesting in that regard to see how well the Tesla Model 3 ends up selling in Europe, once the company finally manages to raise production to the point of meeting demand (whenever that is). It’s a smaller car than the Model S and is much cheaper, but it’s still considerably larger than a Renault Zoe and is more expensive (a bit more or a lot more, depending on options and trims).

National allegiance applies to our number 2 spot holder as well, the BMW i3. The i3 is a German car made by a German manufacturer — unsurprisingly, the model sells well in Germany. In fact, it sells much better in Germany and Europe then it does in the US, relatively speaking. Germany hasn’t had strong EV policies for long, but it is a large auto market and the i3 was heavily marketed for its unique approach to the future of cars, and the highly popular BMW brand. The limited range of the model no doubt accounts for part of the discrepancy between the US and Europe, though — as that is less of an issue in Europe, where things are closer together, than it is in North America, where the distances between destinations can be quite long.

Next up, in third, we have the Nissan LEAF, a model that seems to do quite well in North America as well as in Europe — with the impending release of a much improved (long-range, semi-autonomous, and improved appearance) version of the offering looming, though, sales have dropped off in both markets to a degree. Expect to see sales soar in early to mid 2018 with the release of the new model year. Thanks to its practicality, wide availability, smooth handling, and relatively low pricing, the Nissan LEAF has been a mainstay of both regions’ electric car markets for over half a decade now.

In fourth, we have the Mitsubishi Outlander plug-in hybrid (PHEV), another model that, like the Renault Zoe, isn’t even available in the US — hence the lack of sales there. That lack of availability in the US has remained something of a puzzle, as the Outlander PHEV would likely have sold quite well over the last few years if it had been available — perhaps even giving a hugely needed boost to struggling Mitsubishi. You’ll recall that there’s essentially nothing on the market in the US as regards plug-in electric SUVs (just a few expensive options, the Tesla Model X, Volvo XC90 T8, and BMW X5 xDrive40e). The reason for the success of the Outlander PHEV in Europe to date is easy to pin down — its electric, and it’s an SUV (it has almost no competition). In fifth, I’ve placed the Tesla Model S. Though, arguably, the Model S would actually be the first or second (or third) best selling plug-in electric vehicle in Europe if demand was being met — as evidenced by the very strong sales of recent months as the company’s production abilities have continued improving. The selling points of the Model S (and the Model X) in Europe are much the same as they are in the US — the longest range of the electric cars out there (by far), very effective semi-autonomous driving features, a very useful and extensive fast-charging network, a seamless buying experience, a prestigious name, etc…

While I didn’t included any other models on the list above, a very honorable mention should be made of the Volkswagen e-Golf (which sells very well in Norway), which recently got a large range improvement and has seen sales rise since then. An honorable mention should also go to the Tesla Model X, which only very recently hit the European market in notable numbers and has been selling well since then.

Moving on to the US, you’ll notice that the top 5 list includes some very different names — with GM/Chevy taking two of the top spots and Toyota one of them. Tesla Model S and Model X sales are also substantially higher.

The truth, though, is that figures involving Tesla could be more accurately described as “deliveries” than as “sales” — the point being that the company is reportedly still production constrained rather than demand constrained.

Much more could be said about the success of the Tesla Model S and Model X here, but I’ll limit myself to saying that long driving range is even more important to plug-in electric vehicle buyers in the US than it is in Europe, and also that Tesla’s semi-autonomous driving features seem to be even more of a selling point to consumers in the US than in Europe (possibly due to the generally much longer commutes). Again, the US being Tesla’s home base also makes it Tesla’s priority and a source of national pride for many buyers. Holding the third-place spot, we have the Chevy Bolt EV, a model that is essentially unavailable in Europe (though some rebranded Opel Ampera-e units were sold in Norway, at a loss apparently, before the plug was pulled by new brand owners PSA Group). The Chevy Bolt EV is essentially the only all-electric vehicle on sale in the US that isn’t a Tesla but still offers a long range. Notably, it’s a substantial deal cheaper than the Tesla Model S and Model X, so demand has been fairly strong. The Bolt itself has also been heavily production constrained much of the year. In fourth, we have the Chevy Volt plug-in hybrid (PHEV), once again demonstrating the fact that all-electric vehicles in the US without a substantial range have been getting beat by PHEVs — owing to the greater distance between cities and destinations than in Europe. Hence the reality of the Volt and the #5 spot holder the Toyota Prius Prime (a PHEV) making the top 5 in the US but not the BMW i3 or the Nissan LEAF.

Once the long-range, refreshed Nissan LEAF launches in early 2018, though, you can likely expect it to storm the rankings, possibly even taking the top spot. Likewise, once Tesla Model 3 production gets going in earnest (whenever that is) the model will probably take the #1 spot.

For the latest Model 3 production and delivery news, see:

Is Tesla Model 3 Production Gliding Into 5,000 Cars A Week? Going back to the Toyota Prius Prime, it’s a highly fuel/energy efficient PHEV that was designed so that its all-electric range could meet the daily driving needs of most commuters. By almost all of the personal accounts that I’ve heard, it’s succeeded. It’s sales success in the US has been owing to this reality, as paired with the ability to travel longer distances when needed by utilizing the gasoline-powered hybrid engine — again showing that the sorts of ranges offered in vehicles such as the BMW i3 just don’t meet most people in the US’s needs. Not to be ignored as well, the Prius has a strong brand and is known for a couple of key benefits (fuel savings, green cred), which probably leads to a lot of relatively mainstream buyers coming in for a Prius (probably not their first) and being upsold on the Prime, the highest trim in the lineup.

Any other thoughts on these top electric cars?