In November, the BEV growth rate (+45% YoY) was slightly smaller than that of plugin hybrids (+49%). Part of this last result can be explained by the fact that a number of European markets, most notably Germany, are going to end incentives on PHEVs by the end of this year. We can expect a PHEV registration peak by year end, followed by a notable sales hangover in 2023.

Year to date, the plugin vehicle share was up to 14% (9.7% BEV). With the plugin market now consistently reaching two-digit results in market share, one can say that EV disruption is knocking on the global automotive market’s doors. Expect the floodgates to open next year!

That’s all great, but the internet loves lists, so here you go: The top 20 electric car sales leaders in the world! With Tesla going full speed ahead this quarter, the second month of the quarter showed an impressive result for the Tesla Model Y, the best selling model in the plugin table. The Model Y had over 100,000 deliveries, the best off peak result ever for a Tesla nameplate.

So, there is a strong possibility the Model Y will score another record result in December, which could allow it to once again be the best selling model globally in the overall auto market in December!

As such, the BYD Song (BEV+PHEV) dropped to the runner-up spot, despite both versions of the model scoring record performances (57,166 units for the PHEV version, 7,018 units for the BEV version). This is a continuation of what seems to be a never-ending ramp-up of the midsize SUV.

The Tesla Model 3 also hit its best off-peak result ever, more than 45,000 deliveries, allowing it to get the bronze medal in the November race.

Demand for the Tesla midsized sedan is one of this quarter’s question marks, and also an open question for 2023. While Tesla Model Y demand will continue to be strong in the next few quarters, one wonders how the Model 3 will behave in the same time period. We have seen its demand soften recently, due to external and internal competition (ahem, standard range Model Y).

While the little Wuling Mini EV ended off the podium, it did manage to stay ahead of most of BYD’s constellation of players, while the Shenzhen make placed 6 models in the top 9 positions(!), with four of them (Han, Yuan Plus/Atto 3, Dolphin, Tang) scoring record performances.

Outside the BYD/Tesla duopoly, a few other models are in record-breaking mode. That includes GAC’s Aion S (#12, with 15,323 registrations) and the #16 Zeekr 001. With a record 11,011 registrations, the Zeekr model is becoming a force to be reckoned with in the full size category. Will we see the big fastback get close to BYD’s category rulers, the Tang and Han, in 2023? With export plans already being set, one cannot rule out that possibility in the future. And because BYD hasn’t been mentioned for a while, the attractive Seal sedan was #11 with 15,356 registrations in only its fourth month on the market! Expect it to jump into the first half of the table, which will make a good base for its candidacy for the midsize car Best Seller trophy in 2023.

Outside the top 20, as usual, there is a lot to talk about — with the highlights this time coming from legacy OEMs. BMW saw the fastback i4 scoring a record 7,488 sales, its 4th record month in a row. It seems the Bavarian automaker is finally getting serious in ramping up its midsize offering. Hyundai, hot on the heels of the Ioniq 5’s success (7,849 units last month), is ramping up the new Ioniq 6, with the Korean Porsche delivering 4,287 units in only its third month on the market!

In the Volkswagen Group mothership, the Audi Q4 e-tron scored 6,812 registrations, a near record month thanks to greater production output and its introduction in markets like South Korea and China. Highlighting Volvo’s recent BEV ramp-up, Volvo’s cooler cousin Polestar 2 had 6,900 registrations in November, its second record month in a row. 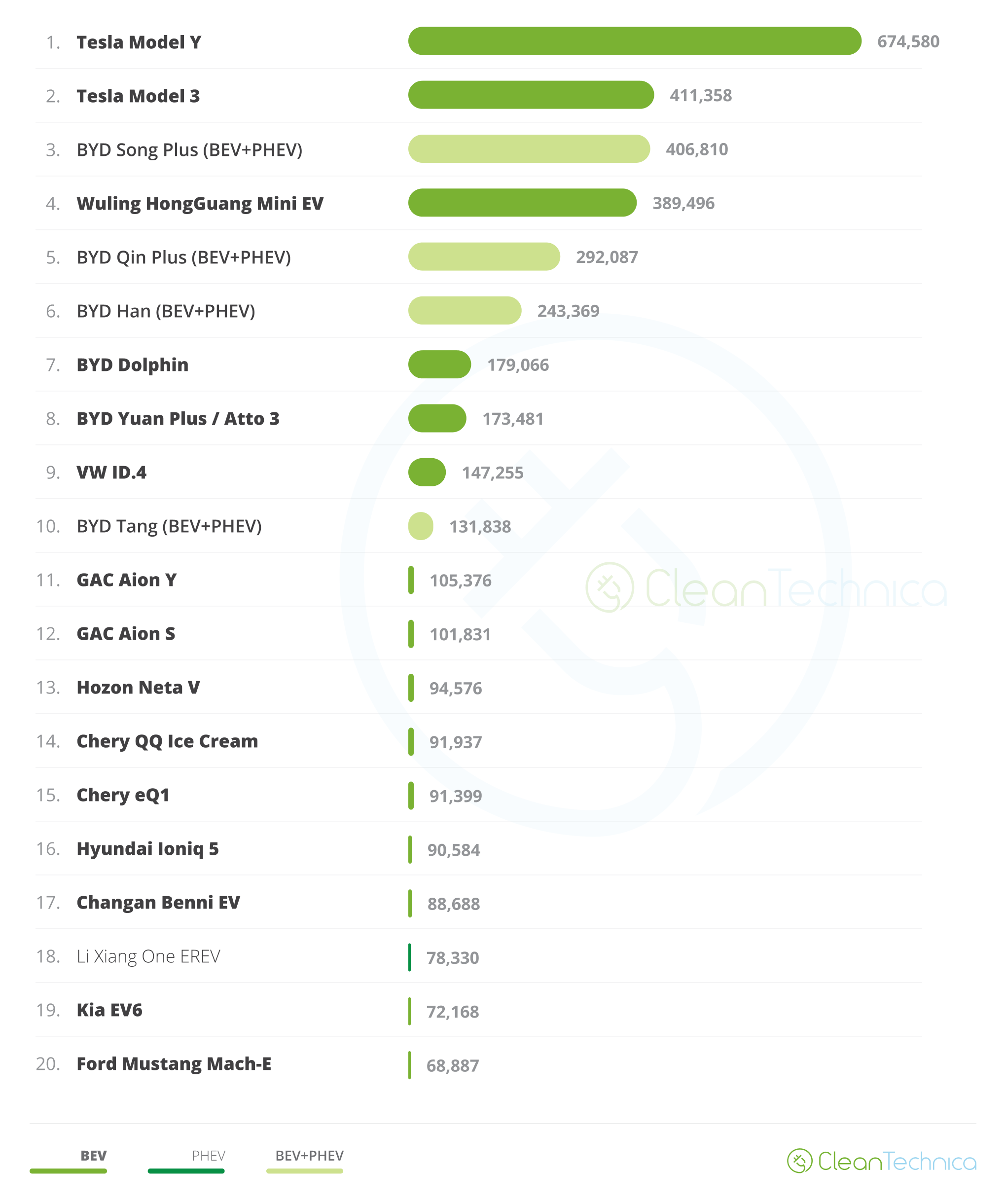 In the year-to-date (YTD) table, the Tesla Model 3 lost ground to the new #3 BYD Song, which surpassed the Wuling Mini EV in November. But because the Chinese SUV is still far (4,548 units) behind, and Tesla’s end-of-quarter push in December should prevent any surprise, Tesla’s #1 plus #2 finish is likely this year.

Despite this, the sign has been given: even if the Model 3 ends the year in the 2nd spot, it is no longer untouchable and Tesla’s #1 and #2 rankings will be in danger next year, especially considering that this year, the Model 3 is down by 1% YoY — and in the context of a fast growing plugin market. It seems 2021 could have already been the peak year for the Tesla sedan. The race for the 7th spot could have changes in December, because if both the #7 BYD Dolphin and #8 BYD Yuan Plus/Atto 3 are still in record-breaking mode, and the crossover model is the brand’s star in export markets, it could have extra help in December from those markets and manage to surpass the hatchback in December. We’ll see….

In #12, the GAC Aion S was up two spots, being followed by the #13 Hozon Neta V, which also jumped two spots. Both climbs were thanks to a bad month from the Chery city EVs, the QQ Ice Cream and eQ1.

With the #16 Hyundai Ioniq 5 fewer than 1,500 units behind the #14 Chery QQ Ice Cream, the Korean model could have a shot at jumping two places in December.

The Ford Mustang Mach-E held onto its #20 position, but Ford’s stylish crossover cannot rest too much, because just 167 units behind, the Kia Niro (BEV + PHEV) is profiting from its new generation to target a top 20 position.