In Europe, vans are essentially what pickup trucks are in the USA. We even had a period with double-cabin trucks with smallish cargo space that were used as private cars, before the SUV/CUV craze made them a better alternative.

Not having vans from Audi, BMW, or Porsche, the vans from Mercedes-Benz are the top of the van market. The smallest is the Citan, a rebranded Renault Kangoo with some Mercedes bling-bling. The middle sized van is the Vito, and the big van is the Sprinter. Vito and Sprinter are real Mercedes-Benz vehicles, with the quality associated with the name. For our North American readers, it sounds perhaps strange that Mercedes-Benz is also selling trucks, but it is actually one of the largest truck makers in the world. In the USA, it operates using the brands Freightliner and Western Star. A year ago, on the 10th of December 2021, the truck and bus division was spun off into a separate company listed on the stock exchange. The vans stayed with the light vehicles in Mercedes-Benz AG.

Birth of the BEV

The Vito is about three decades old. The name is derived from the place it is assembled, Vitoria-Gasteiz in Spain. It sprouted two descendants, the Vito-Tourer, a mini-bus, and the V-class MPV. All three now have a fully electric version, the eVito, the eVito-Tourer, and the EQV. After seeing concepts and prototypes of the EQV at the Geneva International Motor Show and other car shows, my expectations were high. The time Mercedes took to go from prototype to product made my expectations even higher.

Looking closely at the final product is sobering. Those are simple, straightforward conversions of the ICE models. Even the cover of the fuel tank opening is still present, but with nothing behind it. Vans have space for batteries below their cargo floors — that solves a problem conversions of passenger vehicles had difficulty with. There was no need to sacrifice half the trunk or make the back seats only for children. The BEVs built on ICE platforms — resulting in the EQC and EQB — were far better. The battery has 60 kWh of energy storage capacity, enough for normal commercial use. This gives a range between 200 km and 300 km in most use cases in non-extreme weather conditions. The WLTP number is 314 km. At night, it can charge with 11 kW from a level 2 charger. It can also use a DC charger with a max charging rate of 80 kW. For most brand/model/battery combinations, the charging curve is in the Fastned database. The eVito has not been tested yet, but most other Mercedes-Benz model/battery combinations have nice flat charging curves.

The output of the 114HP/85kW motor is optimized with the use of a CVT (continuous variable transmission), making sure this van not too lazy. It is about as agile as the smallest diesel version. I think this choice by Mercedes-Benz is a bit strange. One of the primary arguments to transition to electric driving is better performance and handling. Electric motors are smaller, far more powerful, and often cheaper than their diesel engine/transmission counterparts.

Looking for the smallest battery that can get the job done is logical — cheap LFP batteries for commercial vehicles are shown at shows like IAA Transport in Hannover, but are not for current vehicles. Using a motor that is too small does not make sense. The performance penalty of the weak motor is far bigger than the price penalty of an adequate motor, say a 120 kW motor. The lining of the cargo space with high-quality board is a nice touch. It protects the sheet metal walls and floor against the bumps that are nearly unavoidable without the boards.

An automatic transmission is a rarity in European vans. Worse, most vans have awful transmissions. That alone makes the driving experience of the eVito compared to any other van incomparable.

European city planners have fallen in love with two safety enhancements that can make driving hell even in a small car designed for European cities. Those are mini roundabouts and speed bumps. The eVito conquered them like a champ. I had a photographer as copilot who owned a diesel Vito until recently. She was amazed by the performance on these two obstacles and how it allowed for easier driving.

But this is where praise stops. As the Mercedes representative said, it is just another powertrain. I did not fully realize what that implied. It was not just that the cover of the tank opening was still present, with only the opening behind it missing. The whole set of appendages that a driver uses to control a car was just the same as in the diesel version. To my disappointment, I did find out that it really was an old fashioned, quick and dirty conversion of a fossil fuel vehicle to a battery electric vehicle.

And it has a strange quirk I do not understand. It always starts in ECO-mode, which has limited power and torque. Max speed is also limited on ECO-mode. It drives even more sluggish than its too-weak motor causes. I did not know it until the last 15 minutes of the test drive. And because it is turned off by simply pushing the button, it will be part of the start sequence of every driver that is accustomed to driving in an eVito van. You start with turning the key, disengaging the parking brake, putting the van in normal mode, and shifting from N to D.

The eVito Tourer starts in normal mode for driving. This quirk is only frustrating to incidental drivers not knowing the idiosyncrasies of the van.

About the modern systems we nowadays expect in an electric car, I can be short. There is a small touchscreen in the center. It has some kind of routeplanner, there is a crude cruise control, and it is outdated. It is likely from the time the current generation of the Vito came to market, and it was not state of the art in those days. It is nowhere near what you expect in an electric vehicle with the Mercedes star on the nose.

I am only a very incidental user of vans. I did own a van-based MPV, but that was a people carrier. More precisely, a children carrier with 6 children often in the back. When my kids reached college age, I helped them move from student housing to other student housing a few times.

But one of my offspring is starting a business. They owned an older Vito a few years, until a smaller van became more financially responsible. Now they are salivating over the eVito until their business takes off and they can buy one. My advice to them is to wait for the next generation.

Mercedes is developing a new platform for its commercial vans and the people carrier models based on them, the eVito Tourer and EQV. But the introduction of the new platform is for 2026. Market development, and I hope EU regulation, will incentivize Mercedes to upgrade the current models sooner. Even an interim upgrade such as the ESprinter is now receiving can do a lot of good. As I have described in “European Company Car Market Goes Green,” in a number of European markets, the sales of new vehicles for company fleets will be BEV only before a new Mercedes platform hits the streets. To keep current market share or even win some, the eVito, eVito Tourer, and EQV need an upgrade. 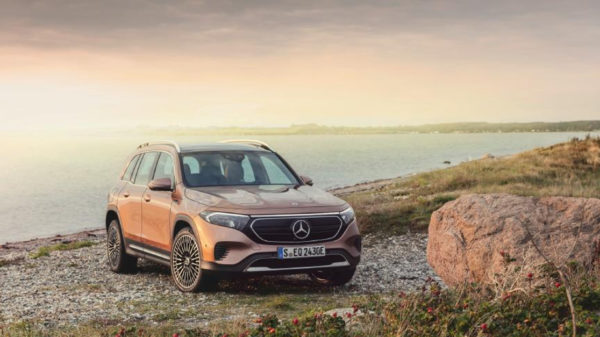