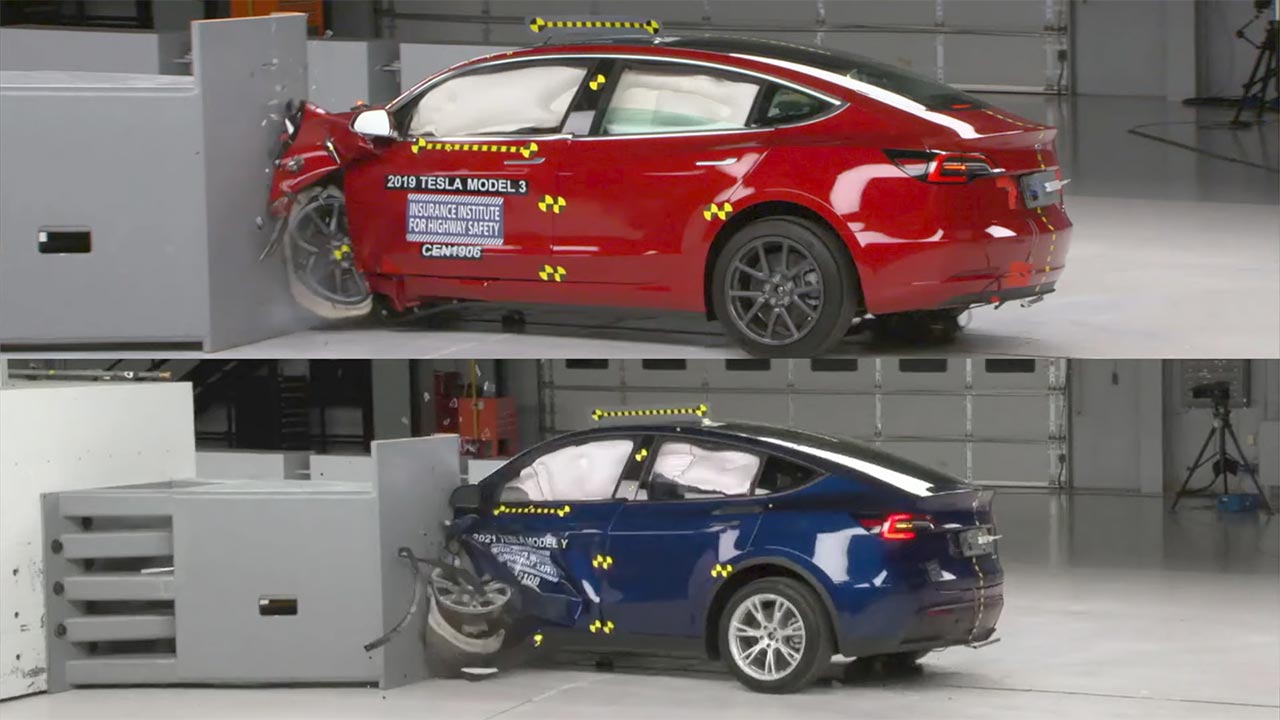 The Insurance Institute for Highway Safety (IIHS) revealed the results of its Tesla Model Y crash safety tests recently. Like all Teslas, the Model Y earned the highest-possible rating during these tests. But there was also a surprise.

When looking carefully at the results, it’s clear that the Model Y electric SUV has proven even safer than the Model 3, via a better score in the “Driver injury measures — lower leg/foot” subcategory and some other categories.

These tests imply that the Tesla Model Y has taken the crown from Model 3 for being the vehicle with the least probability of injury. Interestingly, this would allow the entire Tesla lineup (including Model S, 3, X, and Y) to occupy the top 4 rankings for safest vehicles in the USA.

Let’s take a look at a few of IIHS’s highlights from Model Y’s crash tests — especially in comparison with the Model 3.

With the Model Y’s advancement in body structure design, Tesla’s small SUV performed better than Model 3 in the “Driver-side small overlap frontal crash test.” This particular test simulates the collision that can occur primarily through the vehicle’s driver-side wheel well instead of the center crumple zone.

The Model Y successfully redirected the passenger compartment away from the point of collision instead of trying to absorb the impact through the front crumple zone itself. The Model 3 did good in this test but did not redirect as much as the Model Y.

The numbers coming out of both Model Y and Model 3 tests are even more interesting. For example, in this driver-side small overlap frontal test, the Model 3 had 21 cm of footwell intrusion while the Model Y had only 1 cm of intrusion. This is an impressive achievement on behalf of the Tesla safety engineering team. This is thanks to Tesla employing continuous improvement methodology both on the factory floor and in its software development for its cars.

The Tesla Model Y also performed around three times better in the head injury criterion (HIC) — the Model Y scored 22 points and the Model 3 scored 88 points in this test. The concussion mark is set at 250 points for head injury by the IIHS.

In the moderate overlap front crash test, the vehicle strikes a 2 foot tall deformable honeycomb barrier offset at 10% from its centerline at a speed of 40 mph (64.3 km/h). This tests the safety of the entire front crumple zone of a vehicle.

When compared side by side, the Model Y performed better in the moderate overlap front test vs the Model 3. As a result of the impact, the Model 3 windshield had fractured. Meanwhile, due to its height and impact absorption mechanism, the Model Y windshield stayed intact.

Like the previous small overlap, the Model Y performed well in the head injury collision (HIC) category. While the dummy in the Model 3 experienced a HIC of 177, the one in the Model Y got only 107 — well below the concussion mark of 250.

In the t-bone collision test, the Model Y did exceptionally well, especially for the front passenger, most probably due to its higher sitting position compared to the Model 3.

The dummy in the Model 3 experienced a head injury collision (HIC) of 237 (just below the 250 concussion mark) vs. the Model Y front passenger, which received a HIC of just 120 points.

Also, the Model 3 scored a torso deflection rate (TDR) of 5.2 meters per second while the Model Y did much better with a TDR of just 3.91 m/s.

This is the only area where the Tesla Model 3 performed better than the Model Y, due to its shorter roofline and perhaps also due to the high-strength steel cross member that expands from b-pillar to b-pillar. This cross-member steel bar is not present in the Model Y.

In the roof strength test, the Model 3 got a 5.85 strength-to-weight ratio score, while the Model Y received a 4.2 score.

We recently witnessed a Tesla Model 3 showing the incredible strength of its roof when a large tree trunk fell on it and all the occupants walked away without any injury.

An earlier version of this article was originally published by Tesla Oracle by @IqtidarAlii. Revised update edited by EVANNEX.