Electric cars are mostly like regular cars. You step on the pedal on the right and the car goes, you turn the wheel and the car turns, and the only real difference is what kind of fuel goes in it. We say stuff like that all the time. If we’re being completely honest, though, that’s only mostly true. 99% of the time the only difference is what kind of fuel goes into the car, but that last 1% probably needs explaining.

To provide that explanation, we’ve launched a new segment called “Electric Car FAQs” that hopes to answer those oddball questions that come up 1% of the time. Today’s question: do EVs all use the same plug?

EV FAQs: Do EVs All Use the Same Plug?

Even if you don’t know anything about how electric cars work, you could probably guess that they run on some kind of battery. You’d be right! That battery acts like a gas tank in a conventional car, storing “electric fuel” in reserve until it’s needed. You even fill it up like a gas tank — the main difference is you’re plugging the car into an EV charging station, not a gas pump. Sounds easy, right?

The good news is that it is easy to plug in your EV! But one thing that many people don’t realize is that there are different types of electric car plugs, and different types of chargers. Each one has different capabilities, costs, and charging speeds, and that’s where some confusion can sneak into the conversation.

As ever, we’re here to clear things up for you — starting with the chargers. Level 1 is basically a standard 3-prong outlet, like the kind you have your phone charger plugged into. These work the same way, providing a slow trickle of energy to your electric car battery to basically replace a few miles of driving. You’ll usually get 2-4 miles of range per hour of charging, and it usually won’t increase your monthly electric bill by a noticeable amount, making level 1 home charging an extremely cost-effective charging solution.

Level 2 charging stations use 208 or 240 volts of electricity — more like the big plug your clothes dryer is plugged into. These are to charge your vehicle up to 10 times faster than a level 1 station. If you drive more than a few miles per day and want the convenience of knowing you’re starting each day with “a full tank” from charging at home, installing a level 2 charger in your garage is the way to go, and you can expect to get up to 200 miles of range from an 8 hour, overnight charge.

Because level 2 power is usually available in most commercial locations, many businesses that want to incorporate EV charging stations into their parking lot deploy level 2 charging stations. Whether you’re putting a level 2 one in at your home or at your business, be sure to check with your local utility for rebates and incentives to help keep costs down.

DC fast-charging plugs are typically considered “level 3” and have significantly faster charging speeds than the level 1 or level 2 “AC” chargers. With enough juice, a DC fast charger can charge an electric car battery to 80% from almost empty in about 20 minutes (depending on the vehicle) … but this is a good time to tell you that not all “level 3” charging is created equal.

“Level 3” is a generic term that used to be quite clear. As technology has advanced, though, it’s a term that has led to more confusion that anything else, because it could mean anything from around 25kW of power to more than 300kW (!?). … at another local charger, a “level 6” to use Chargeway’s naming system — the time drops significantly. You can get the exact same charge in under 40 minutes (below), instead of (quick math) 2015 minutes. That’s a lunch stop or a grocery run, and knowing ahead of time what to expect when you get to a fast charger is going to make a big difference in your experience. The National Auto Dealers’ Association recently partnered with Chargeway to help train electric car dealers to use this more intuitive “level 1–7” power system as they talk about EV chargers … but they also want to use Chargeway to help simplify the conversion about plugs, which we’ll get to next.

CHAdeMO was the first type of DC fast-charging system on the market, and helped early e-mobility adopters reduce range anxiety. Cars with CHAdeMO plugs can fast charge a battery to 80% in about 60 minutes at a rate of roughly 2 miles of range added per minute of charging. 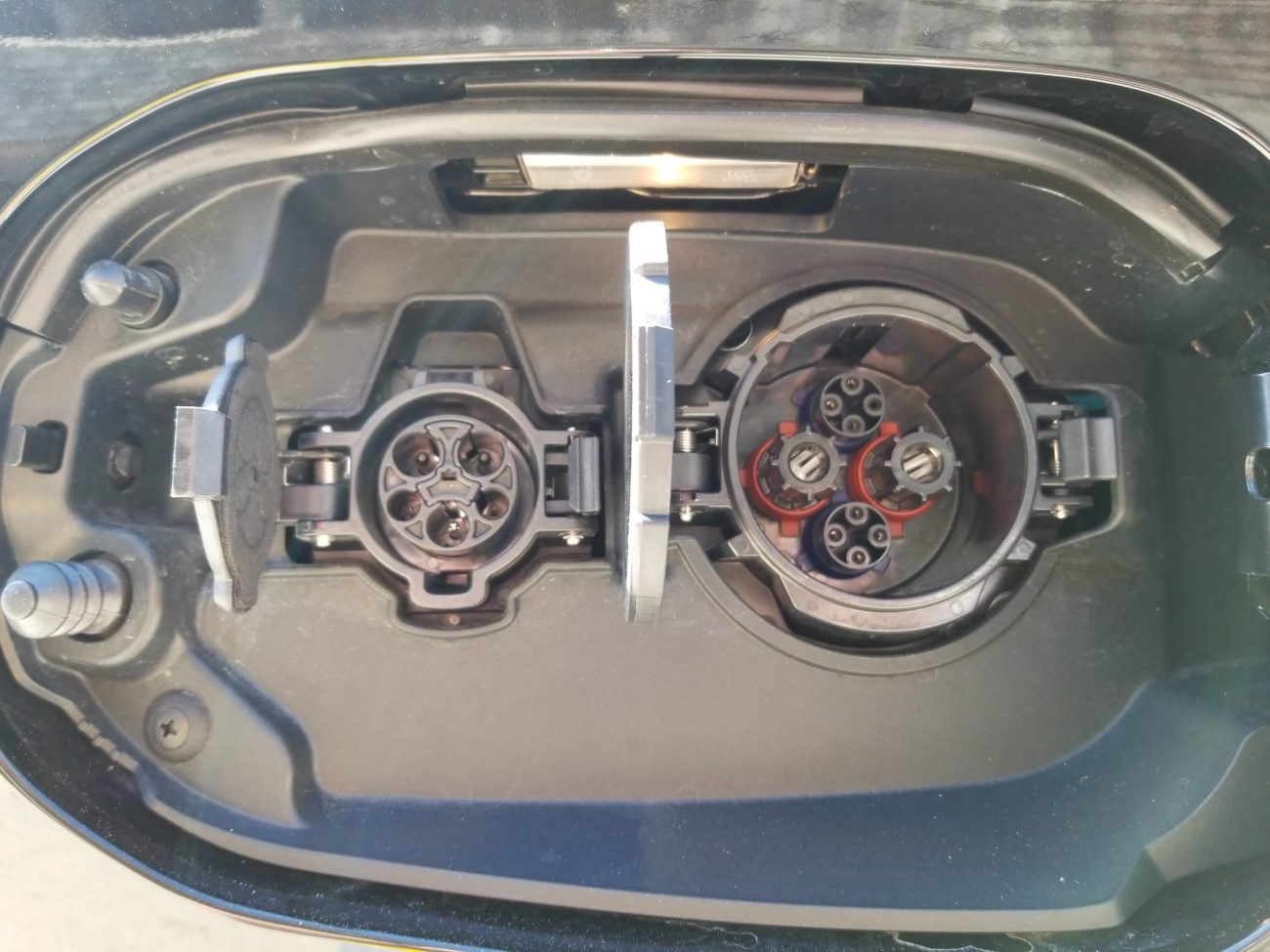 Today, the Nissan LEAF and Mitsubishi Outlander PHEV (shown, above) are the most common CHAdeMO vehicles, but even they are switching to the more common J1772 with their next generation of electric cars. Still, there are hundreds of thousands of used EVs on the market that use this standard, so it’s worth knowing about.

Most “modern” electric vehicles (the notable exceptions being cars built by Tesla) use the J1772, and the J1772 plug can charge your car using 120, 208, or 240 volts of electricity, depending on the type of charger station you’re using. These are those “level 1” and “level 2” we talked about earlier, and it’s the most common type of charging you’ll find.

For fast charging, those same cars use the SAE Standard Combined Charging System, or CCS. Developed by the society of automotive engineers (SAE, natch), this is the most widely used fast charging standard globally, and works with most fast chargers — just not, currently, the Tesla Supercharger Network, will.

Tesla cars on the Tesla Supercharger network use proprietary standards that, while also called “level 3” by most networks, typically fall into the “level 6” or “level 7” range offered by Chargeway. Tesla drivers have exclusive access to the national network of Tesla Superchargers to charge their vehicles, but they have to use an adapter to charge at other DC fast-charging stations that use CCS or CHAdeMO plugs and at Level 1 and Level 2 charging stations. We already talked about the way that a charging app displays information can have a huge impact on your expected wait times while you’re charging. Chargeway also simplifies the process of finding charging stations that work for your car. Instead of showing a “generic” charging map that shows all the chargers in your neighborhood, Chargeway only shows you the stations that will work for your specific car, reducing anxiety and making it easier to “fill up faster” with electric fuel.

Blue for CHAdeMO, green for J1772/CCS, and red for Tesla. Higher numbers equal faster charging, so if you have a Chevy Bolt, that’s a Green 4. A Mustang Mach-E? That’s a Green, too, but it will go up to level 6. A brand-new Tesla Model S? Red 7.

It’s intuitive, and it’s the language that many dealers will soon be using. “Because the 16,000+ NADA member dealers represent nearly all the major automotive brands, their adoption of Chargeway will create a de facto ‘standard dictionary’ of EV charging terms,” reads the official NADA press release. “‘Green’ plugs, ‘Level 6’ chargers, etc. That will make it easier for EV dealers and buyers to communicate, regardless of brand.”

With all that said, we hope we’ve made it clearer for you to understand the different types of EV charging and chargers. If you want to hear about more clever ways to visualize or talk about EVs, you can tune into Chargeway’s founder, Matt Teske, on the Electrify Expo podcast with CleanTechnica’s Jo Borras (me!) on Apple Podcasts, Spotify, or anywhere you get your podcasts.

Don't want to miss a cleantech story? Sign up for daily news updates from CleanTechnica on email. Or follow us on Google News! Have a tip for CleanTechnica, want to advertise, or want to suggest a guest for our CleanTech Talk podcast? Contact us here.
In this article:CHAdeMO, Electric Cars (EVs), EV Charging, EV home charging, level 2 chargers, tesla superchargers