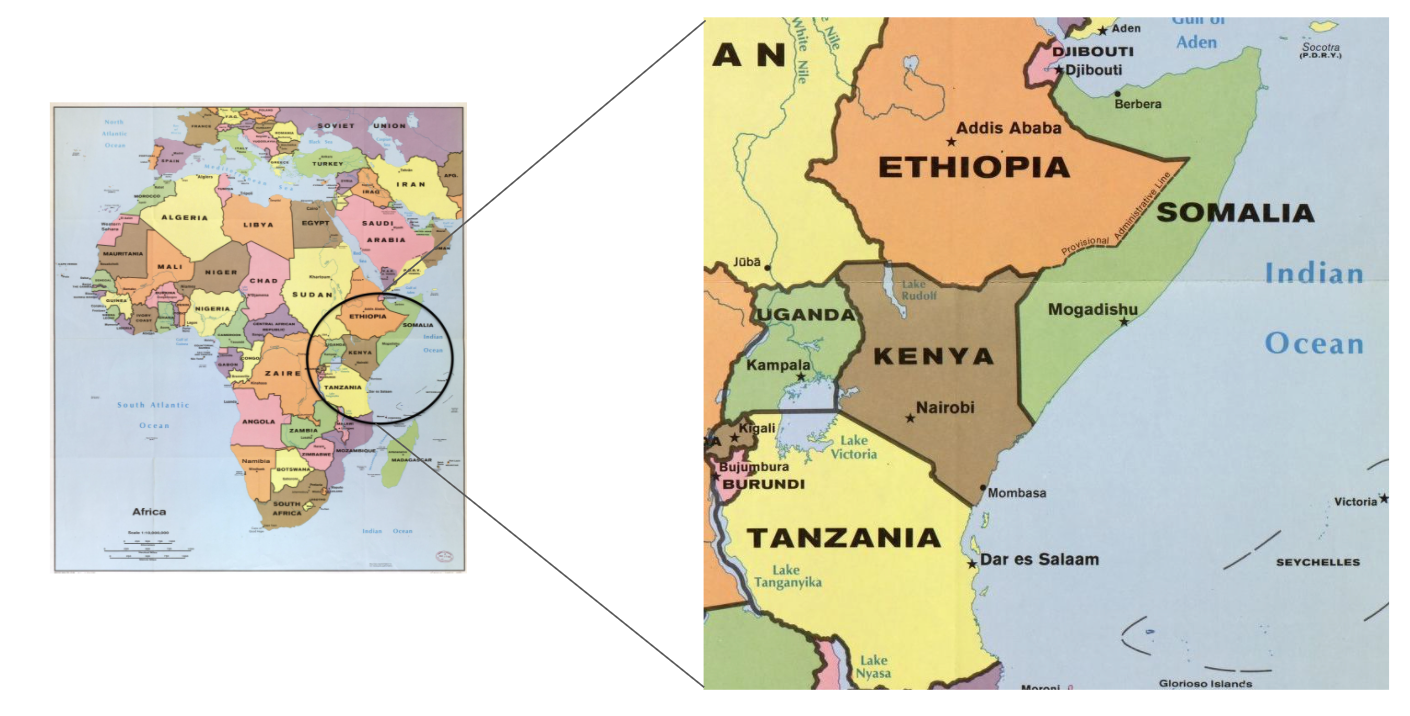 Map courtesy of US Library of Congress

Recently, a Kenya-based solar energy professional, Nick Lusson, reached out. After over a decade installing solar in Africa, he’s now a business development executive with Jubaili Bros solar division. It is a Lebanon-based, power-systems supplier in the Middle East, Africa, and Asia, which diversified into solar in 2017.

We spoke about the potential for grid-scale storage in Kenya and surrounding regions. I was fascinated to gain a first-hand account of the grid and renewables in another country. While I’ve looked at the impact of climate change or general renewables opportunity for 2-3 African countries, there are 55 states and 1.2 billion people in that very large continent. It’s incredibly diverse.

Base map courtesy of US Library of Congress

Note that where any errors about Kenya’s electricity are made, they are mine. Quick notes followed by research does mean that errors in transcription and understanding will arise.

Kenya is the wealthiest east-African country per capita. This doesn’t make it a wealthy country by European or North American standards, but at $1,816.55 USD GDP per capita it’s 50% more affluent than neighboring Tanzania, and well above the current global extreme poverty level of around $2 USD per day.

Kenya stands out for another reason. As of 2015, 70% of sub-Saharan Africans lived without electricity. In Kenya, the World Bank indicates that 75% of the populace are electrified, the highest in Eastern Africa. Lusson cited a 65% rate, and other things he shared with me indicate that there might be a discrepancy between the Kenyan government’s claims and the reality on the ground. That appears to be the case per surveys performed by Afrobarometer in 2018, which report 48% access to electricity. As Canada is not above citing the best interpretation of numbers, this isn’t a criticism, just an observation. Kenya electricity supply per year in GWh courtesy of IEA

There’s great news in this chart for the country. Between geothermal and hydroelectricity, the country is doing very well for low-carbon electricity. It has also been building wind and solar capacity, although it’s relatively small at present.

The bad news comes in three parts. The first is that it is still generating a lot of electricity from coal, diesel, and even heavy fuel oil — aka bunker fuel. Oil generators aren’t uncommon in emerging economies around the world. It’s stable, easy to transport, and any electricity is better than no electricity. The second is that the hydroelectric generation it rightly brags about is heavily seasonal. The dry season massively reduces hydroelectric generation. Naturally, that’s being exacerbated by climate change.

The third is it has more capacity than demand. The country has about 2.8 GW of capacity, but peak demand is only around 1.8 GW. Projected growth of demand, per Lusson, was higher. Now it is in a position where it has to curtail renewable generation because demand is lower than supply. The gap across renewable generation is as much as 0.6 GW on some days at present per Lusson, suggesting that potentially 2.4 GWh of electricity is effectively thrown away due to curtailment. Note: these numbers are at best imprecise, but becoming more in focus with each year due to the rapid increases of deployments of solar energy.

This might not be an issue if the 75% or 48% of grid users were experiencing high grid reliability at present. Per the same Afrobarometer report, only 37% of Kenyans experienced grid access which worked most or all of the time. Lusson’s anecdotal experiences are 90% grid access in his relatively affluent neighborhood, and daily blackouts in many other parts of Nairobi, which suggests even poorer access in non-urbanized areas.

There’s a gap of delivery of potentially useful electricity that could be serviced. Right now the sun that shines and the wind that blows is falling and blowing on generation assets which often are curtailed because there is no one to consume the electricity.

Lusson’s insight is that pumped hydro storage might be suitable for Kenya’s needs. After all, while much of the country is semi-arid or arid, much of it isn’t, and major hydroelectric projects are being developed in Africa. Just as Kenya is an excellent country for geothermal generation due to the Great Rift Valley running through it from Ethiopia to Tanzania, it’s also a good country for close-loop pumped hydro resources. As I was familiar with the Australia National University (ANU) global pumped hydro resource map, I brought it up for Kenya. To be clear, the ANU map includes only closed-loop, off-river, off-protected lands, near-transmission sites where there is greater than 400 meters of head height. This means the sites have significant storage potential with small reservoirs, low environmental impacts and a reasonable chance of being economically viable. The map above is only of 2 GWh resources, roughly in the range of the gap in Kenya. Obviously, there are many.

This required us to narrow down the potential sites. There are several obvious factors involved in this. The first is that any sites near existing large bodies of water were likely cheaper as using a lake as the bottom reservoir near a hilltop reservoir would likely make the capital costs lower. This is the pattern that Mark Wilson of Intelligent Land Investments is applying in Scotland, with Loch Ness as one of the bottom reservoirs in the three sites he’s working to get into construction, per my conversations with him. The second is that while pumped hydro can work off of grid electricity, there are advantages if it’s closer to the source of generation. While European and North American grids are running very low levels of transmission losses, in the 5% to 7% range, developing grids aren’t there yet, and electricity markets aren’t as refined. As such, there are situations where it’s just cheaper to string your own transmission between generation and storage, or to have lower distances. Lake Turkana in northwestern Kenya, has a 150 MW wind farm — just under half of wind energy for the country — and reasonably large solar farms in the region.

Third, you want to shorten the horizontal distance between the upper and lower reservoirs as much as possible. The penstock has to be in the 9 meter / 30 feet diameter range and be relatively low in curves, and that big a tunnel through rock is expensive on a per-foot basis, something Tracy Livingston is trying to bring down in cost and time as winner of the DOE’s FAST competition for accelerating pumped hydro.

Fourth, you don’t want to try to build pumped hydro where there are lots of rich peoples’ homes, cottages, or beaches. NIMBYs are NIMBYs everywhere in the world. Not many on Lake Turkana due to its location far from major population centers, according to our discussion. This was really narrowing it down. Our initial site guess was the one above, with over 500 meters of head height, around 2 GWh of storage, and under 6 km horizontally between lake and upper reservoir site. Note that the ANU study ignores lakes as lower reservoirs, so it located a bottom reservoir regardless. It would be interesting to see a run with lakes as the bottom reservoir, and what that would imply about resource potential.

Fifth, you want to consider other economic factors. Places with lots of out of work coal miners have advantages, and a major coal development was recently shut down, so there is the potential to have skilled rock workers to build the facility. Per my assessment of CLP Group’s 2.4 GW facility in Guangzhou China recently, the work is in construction and early operation, with later operation being hands-off, but that’s a decade or more of employment.

This was the most obvious site in the few minutes we looked at this, but there are hundreds in the region. It might make sense to build a facility in Uganda, the next door country with good hydroelectric facilities that I understand provides some of the power to Kenya. There are many options, and many factors to consider. I connected Lusson with Wilson to see if it was possible for Wilson to share at least the broad strokes of the sophisticated pumped hydro siting economic viability model ILI developed. I’m curious to see how that turns out.

It was an interesting conversation. Africa’s size and distance masks incredible diversity in western media. Lusson’s firm is acting as a supplier for major Chinese manufacturers, and China’s Belt and Road initiative is very active in China. As I noted in a recent storage assessment, 35 of 40 sites and 50 of 60 GW of pumped hydro projections in construction today are in mainland China. The opportunity for pumped hydro and other storage in the rapidly expanding African market is high.

Don't want to miss a cleantech story? Sign up for daily news updates from CleanTechnica on email. Or follow us on Google News! Have a tip for CleanTechnica, want to advertise, or want to suggest a guest for our CleanTech Talk podcast? Contact us here.
In this article:China, Kenya, Pumped Hydro