It was Ford Mustang Day yesterday, and that helped me to finally get through video editing of some of our Ford Mustang Mach-E footage from February, when we had the Mustang Mach-E visit us for 7 days on the Florida Suncoast. This is not a super pro-quality video, but it may interest some people who want a close look at the settings on the infotainment screen, the driver-assist features, or the cargo area dimensions. Also, you can simply skip the video altogether and read my summary of the features and dimensions down below the video! Of course, being Tesla owners, we were inclined to compare the things we found in the touchscreen to our Tesla infotainment and Autopilot experience as we talked through it. I put more comparisons in the text to try to be thorough and helpful, and also because my experience with these features all came after recording the video.

You can watch the nearly 30-minute video if that might interest you, but it’s a somewhat meandering, “organic” one, and as I said, it’s not pro-quality video production. (That’s not my forte.)

First things first, though, style/look/aesthetics is one of the most important factors for most buyers, which is partly why there’s so much variation on the surface of different models covering what are extremely similar features and qualities underneath — all across the auto market. In this case, some will prefer the Tesla Model Y’s styling and brand, and some will prefer the Ford Mustang Mach-E’s styling and brand. If you care more about the details of cargo space or tech, let’s move on.

Naturally, there are several Tesla features not in the Ford Mustang Mach-E — like the Netflix + YouTube + Hulu + gaming infotainment system and the Full Self-Driving package (which includes automatic lane change and on-ramp to off-ramp autonomy, and more once more features are unlocked). Also, this isn’t an overall comparison review of the models, just a close look at the features in the Mach-E and some comparison to what you get in a Model Y. 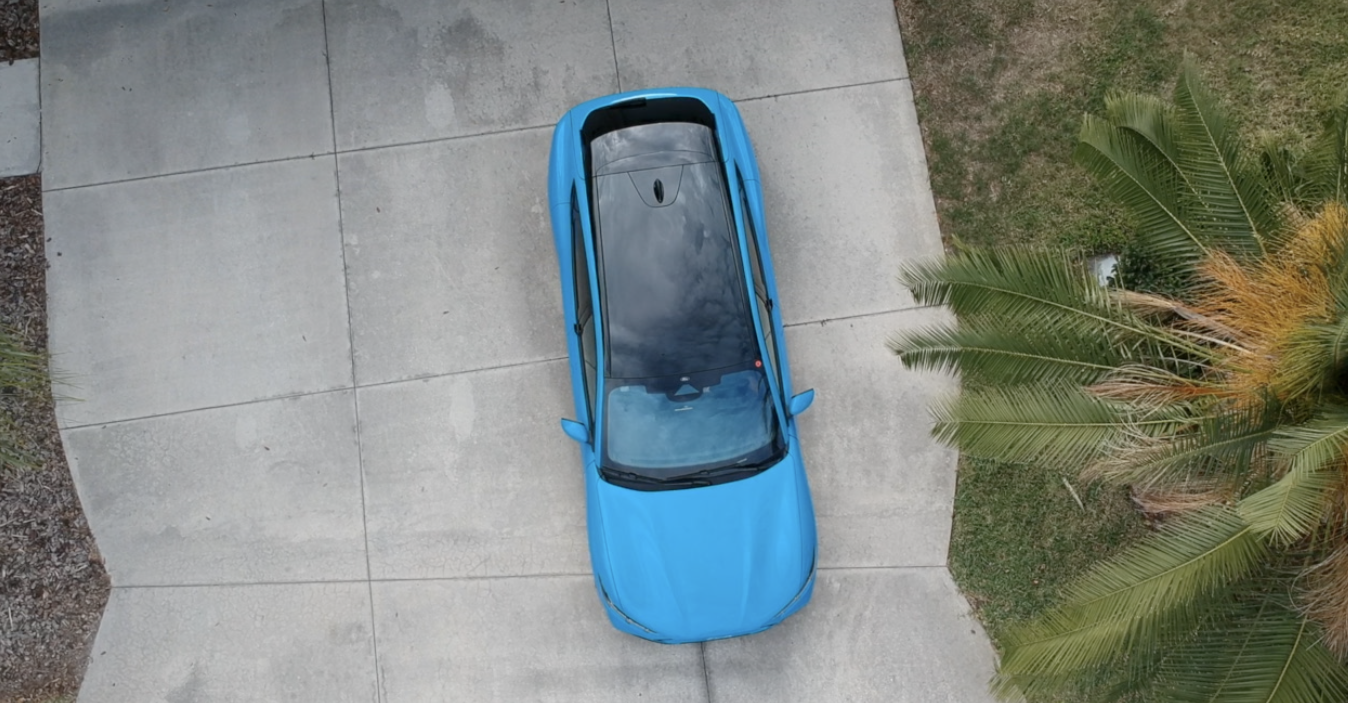 To kick off, note that the Mustang Mach-E’s touchscreen is approximately the same size as a Tesla’s, and the same orientation as an original Model S or Model X (that is changing after a recently announced refresh, though). Responsiveness is good. One Tesla owner thought it wasn’t quite as good as a Tesla’s, whereas another one thought it was better. So, at the very least, it’s similar.

It took Paul and I a while to find out way around the settings. I assume that’s a challenge people new to Tesla still face. However, I’ve noticed that Tesla has cleaned up and better organized its UI over the years and feel like it’s slightly easier to use. But I am clearly biased, and in any case, they’re similar enough that I’m giving them the same grade. (But, at the same time, I recommend that Ford find ways to clean up and better organize the Mach-E’s UI.)

It is not featured here, but I love the visualization of the large touchscreen and the screen behind the wheel when you turn on the Mach-E. It is simple but very cool, and one of those little things that just makes a difference many days of the year. And little things add up. That said, I had two drives in the course of a few days where the main touchscreen didn’t turn on at all. It was completely black. I couldn’t find any way to reset it while driving, and thus couldn’t look at anything or adjust anything (such as air conditioning, radio, or drive mode). I hope that was an odd glitch that was somehow just affecting this early media loaner and is not appearing in customer cars. Let us know if you’ve seen anything about it. I’ve had my screen black out in our Tesla maybe twice in two years, but if I have that problem pop up in a Tesla, it’s easy to reset the screen (hold down the two scroll wheels on the steering wheel) and it doesn’t take too long to reboot. Drive Modes: One of the first settings you have on the left sidebar of the tall touchscreen. You can put the Mustang Mach-E in Engage (“Balanced drive, fun and engaging.”), Whisper, or Unbridled. Obviously, you want to put it in Unbridled.

On that screen you also have the option for one-pedal driving (which you also definitely want turned on unless you’re cray cray or have a very hard time with change).

The third option on that screen is “Auto Ambient Light Selection.” I don’t really recall how much I liked that, but I think it was quite good and seemed best to keep activated.

The final option in that Drive Modes section should never be touched. It is abhorrent and an offense to a beautiful fully electric crossover like the Mustang Mach-E. Okay, some people will like it. As you can see toward the end of the video, though, I couldn’t handle “Propulsion Sound” behind on for more than 10 seconds or so. (So ugh.)

Camera: The backup camera is superb. I noticed in the evening that it is definitely a step or two below Tesla’s, but other than being a bit poor in dim/dark lighting, it is a great resolution and displays at a nice size on the touchscreen.

You also get a front camera view! That’s something you don’t get in a Tesla (much to my chagrin, as it would really be useful in many cases).

And you have a few different ways of viewing the different camera feeds on the touchscreen.

Something that 99% of people will love (seemingly, Elon not included) is a bird’s eye view option!

Rounding out this first column of settings on the left were: Parking (the ability to turn off or on the parking aid visualizations), Access (to unlock/lock the charge port and turn the charge port light on/off), Driver Assistance (which included an “Auto Hold” option and the choice of turning traction control on/off, as well as an “Additional Settings” button I’ll come back to), and Valet Mode.

Overall, all of the features above are quite similar to what you get in a Tesla, if not identical in some cases, and seem to be well implemented in terms of simplicity of use and customization for different preferences.

The “Additional Settings” button noted above opened up a lot more options. As I go through listing them, I’m also going to comment a bit on my experience using the ones I used a bit.

You have three options here:

Adaptive cruise control is well known — you follow the car in front of you and keep a certain distance from it if it slows down or speeds up. If no car is in front of you, well, that’s where you get to the next option.

If you select Intelligent Cruise Control, you can set the cruising speed (without a car in front) to be the speed limit or whatever MPH over the speed limit you think is best. This is a nice option for me as a Tesla Model 3 owner because I’m locked into a max 5 MPH over the speed limit on most roads, which is simply not adequate in this area, if I have on Autopilot with lane keeping. It was nice to have the higher cruising limit in the Mustang Mach-E for a few days.

Also underneath the Intelligent Cruise Control section is a “Lane Centering” option. How does it operate compared to Tesla Autopilot? From my limited use, quite well! It kept me in the lane well and didn’t ping pong me, but I admittedly did not use it extensively enough to test it out in all the cases I’m used to using Autopilot. There were two things about its implementation that were significantly different from how Tesla Autopilot works:

For my taste, I would stick with Autopilot (I’m a cautious person with this kind of thing), but I also see the appeal of Ford’s system and can especially appreciate that it re-engages automatically.

Will give you a warning if you are going over the speed limit.

You have the option to have it aid you, alert you, or both aid and alert you (regarding staying in the lane).

You also have different “intensity” levels for how much it keeps you in the lane or not — options I didn’t end up playing with.

These are features like you have in a Tesla or other new vehicles of a certain class or brand to automatically brake, swerve, or accelerate in certain high-risk situations.

There’s also a very cool feature to provide a visualization indicating if you are driving a safe distance* behind the vehicle in front of you (*based on time gap, not actually distance, as this matter is, since that is what’s relevant). Here are a few screenshots that capture the point: Good distance from vehicle in front. And various small but potentially life-saving (or bumper-saving) safety features:

Overall, it’s a great suite of driver-assistance and safety features for 2021.

Where Did My Energy Go?

One nifty feature Paul and I especially liked was a bar chart showing where the car’s energy use went on a specific trip (which includes time parked if you let the timer run). It splits up energy visually and also by showing percentages of energy used by:

Like with the Model Y, the hatch can be lifted or closed with the touch of a button and can also be set to open to a certain height — so that people of different heights or who have different obstacles in their garage can have it open up just to the point desired, and no further. Both the Y and the Mach-E have an under-trunk cargo area, and the Model Y’s is far larger.

As far as the main trunk area, the Model Y’s is significantly longer.

The Model Y’s frunk is also much larger than the Mustang Mach-E’s frunk. 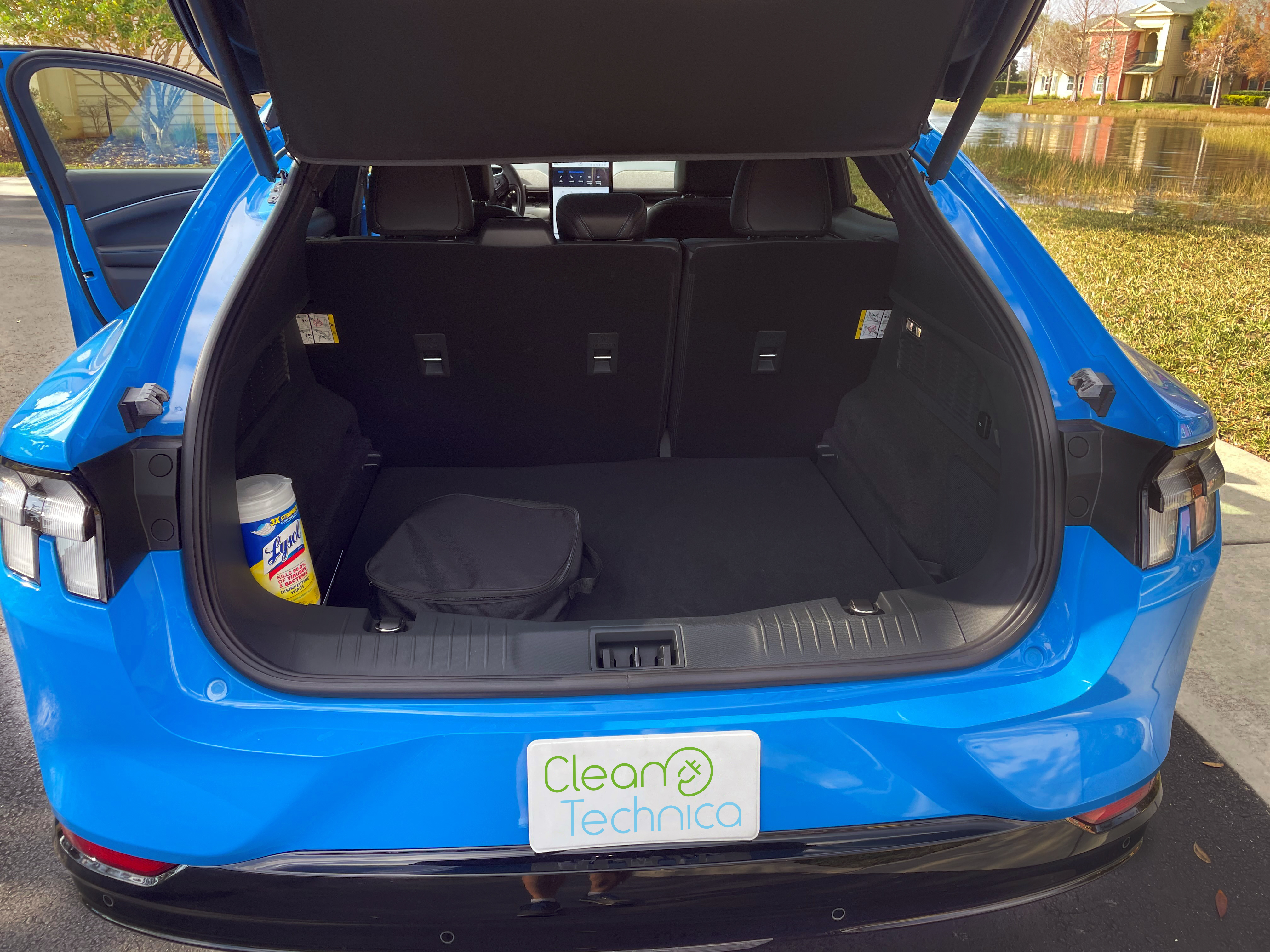 Here’s a rundown of the dimensions (roughly) for the Ford Mustang Mach-E 1st Edition cargo area:

Here’s a rundown of the dimensions (roughly) for the Tesla Model Y Long Range cargo area:

One more notable matter is the rear window. Visibility is quite good (for a crossover) in the Mustang Mach-E, whereas it is very poor (scarily so) in the Model Y. I think the Tesla approach is: you won’t need to driver yourself soon anyway.