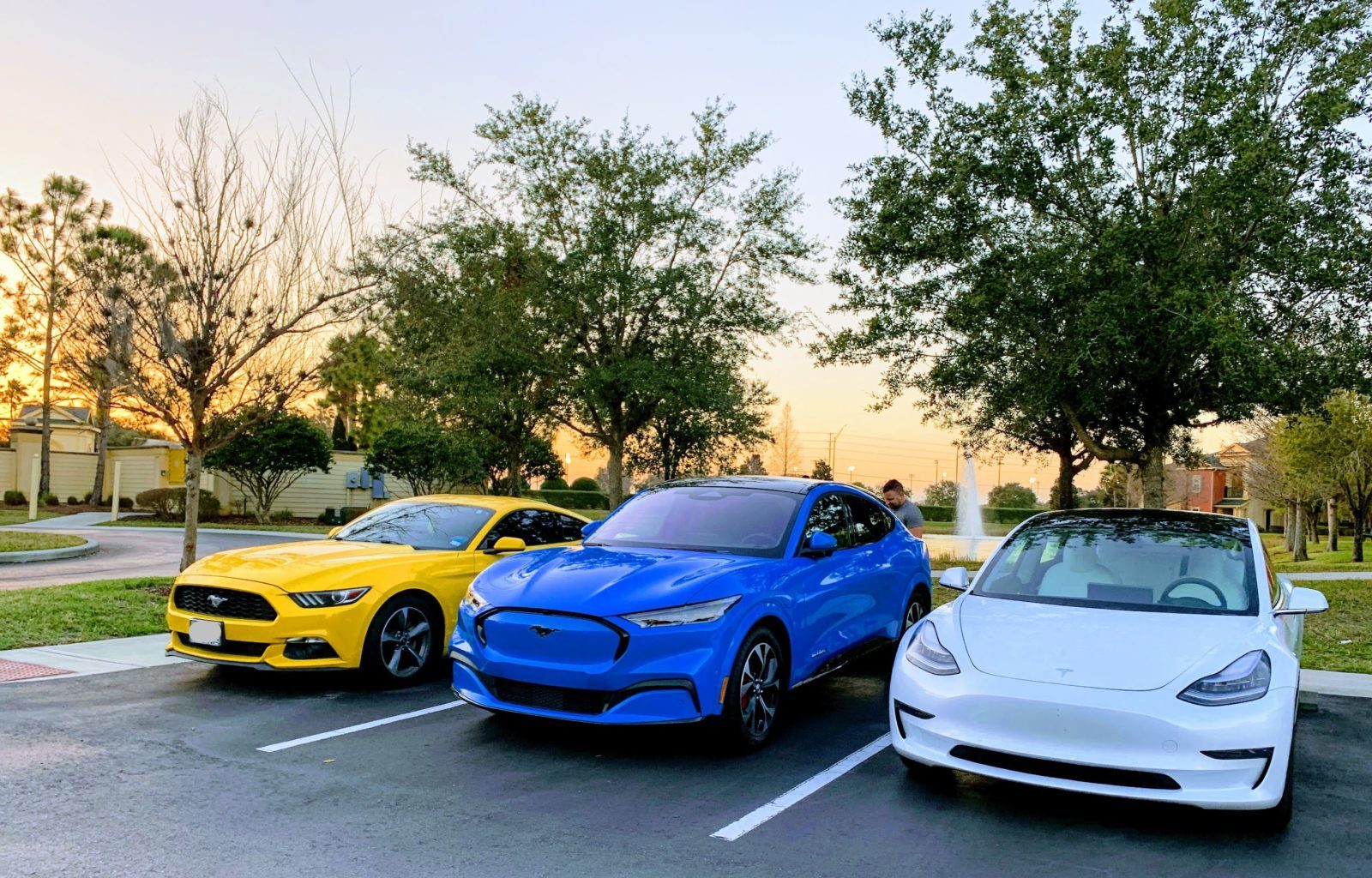 We hear a lot about how electric cars are more expensive to buy than so-called “conventional cars.” As EV advocates, we strain to explain to all who will listen they are actually cheaper if you figure in lower maintenance and fuel costs. On average, the electricity they need costs about half what gasoline costs to drive an equivalent distance. So we tie ourselves up in knots talking about true cost of ownership.

But people don’t want to hear that. Typical new car shoppers go to their local dealer with one question in mind. How much is the monthly payment? Try to explain that an EV will actually cost less in the long run and their eyes glaze over. They don’t want to hear it. The EV will cost $50 more a month than a brand new Belchfire 5000 with the Y-9 tri-turbo engine? Ridiculous. Let someone else save the planet.

In an email this week, Bloomberg Green contributor Nathaniel Bullard makes the case that EVs are already at price parity with those conventional cars. How can that be? “Inexpensive new cars have pretty much vanished in the U.S.,” he says.

“If inflation doesn’t explain this price trend, the logical conclusion is that new car sales are going upscale. That holds for new car leases, too. I picked seven luxury brands and plotted their lease penetration (i.e. the percentage of vehicles that are leased by a company’s finance unit rather than sold outright), as well as each brand’s true market value (i.e. the average price buyers or lessees pay across the brand). I also included four mass-market brands for comparison.

“People still say that EVs are ‘expensive,’ and yes, they do have a higher upfront cost than a comparable conventional car today. But given that half the new car market is priced above $40,000 and more than a quarter is priced above $50,000, the absolute cost is not excluding vehicles from the market.”

He’s not kidding. The 2021 Chevy Suburban starts at $51,700. The average sales price of a Ford F-150 is $57,640. A Buick Enclave Essence starts at $44,000. The list is endless. Yes, a Hyundai Accent can be had for $15,650, but that’s a strippo model with a manual transmission. How many of those do you see out on the road today? And for sheer chutzpah, Jeep takes the Grand Prize this year. It has just announced the Wrangler Rubicon 392 with a 470 horsepower V-8 engine under the hood. It starts at $74,995! The ordinary Rubicon with a V-6 engine starts at a mere $43,710. Are we done complaining about how expensive electric cars are yet?

Bullard goes on to say that Bloomberg New Energy Finance predicts “upfront cost parity” for US electric and internal combustion vehicles will arrive in 2024. “In three years, there will be no price difference and no EV sticker shock. EV models might still be relatively expensive, but they won’t be more expensive than a comparable internal combustion engine vehicle.”

Why is that important? Because 3 years just happens to be the length of a typical automotive lease.

“Anyone leasing a luxury vehicle today will be returning that car to the dealer in 2024 and likely finding that there’s an electric vehicle waiting for them at their accustomed price point. That decision about the next lease won’t require any total cost of ownership math or a sales pitch that says ‘Well, sure you pay a bit more upfront, but your bills are lower!’ It just requires a ‘What do I want?’ car-buyer’s decision, an emotional buyer’s connection, and that will be a milestone.”

Yes, he did say “luxury vehicle” and many people will deny they drive such a car. But the numbers don’t lie. More than half of all new vehicles sold in the US today cost more than $40,000. There are a slew of electric cars on the market or coming to market in the next 12 months, many of them SUVs, that are priced right around that number beginning with the Tesla Model 3, the “off book” Model Y SR, and the Volkswagen ID.4, to name just a few.

We are not necessarily fans of General Motors, but there seems to be no good reason why its electric Hummer should have a $7500 price disadvantage compared to the electric pickups coming from Ford, Rivian, and Lordstown Motors. Nor should Tesla be penalized when its Cybertruck comes to market just because it had the foresight to start building electric vehicles a decade before those other guys.

One bit of good news is that Senator Jeff Merkely of Oregon has introduced a bill co-sponsored by Bernie Sanders, Corey Booker, Jacky Rosen, Dave Schatz, and Patrick Leahy that would amend the existing federal EV tax credit in important ways. Entitled the Electric Credit Access Ready at Sale Act of 2021.  According to KTVZ Channel 21 News in Oregon, the legislation would:

In a statement, Senator Merkley said, “As climate chaos continues to ramp up with record setting winter storms, violent hurricanes, and catastrophic wildfires, it is imperative that we transition away from gasoline powered vehicles which are fanning the flames of the crisis. Consumers are already looking for electric cars and this bill will help drive adoption faster — and make sure more of those cars are made by American workers in American factories.”

The way the federal tax credit works today, it punishes Tesla and General Motors, both of which build electric cars in America.

“We need to quickly and aggressively invest in electric vehicles to combat the global climate emergency that threatens all of our local communities,” added Senator Welch. “Owning an electric vehicle can be cheaper and offers significant public health and environmental benefits, but for many Americans they are unaffordable at the dealership. This bill makes the next generation of electric vehicles accessible to more people by allowing them to receive the electric vehicle tax credit right away. Encouraging electric vehicle adoption is a common sense win for consumers, the environment, and American workers.”

The Feel Of The Wheel Seals The Deal

There is no question that extending the federal EV tax credit and converting it to a point of sale incentive would do wonders for US EV sales. Germany has a similar program that pays EV buyers €9,000 up front, with the government picking up 2/3 of the cost and manufacturers the other 1/3. Does this legislation have any chance at passing? Probably not. Politics is a messy business, one that usually involves promising something disagreeable to a fellow Senator in order to get what you want. This is pure speculation, but expect Big Corn to have something to say about a bill that would ultimately result in lower ethanol sales as more electric cars take to the highways and byways of America.

A recent survey of EV owners by JD Power suggests there may be an another powerful way to get people to buy an electric car other than offering them incentives. Put them in one and let them experience what it is like to drive electric for themselves. The survey, which was released at the end of January, strongly suggests ride and drive events that allow members of the public to drive an electric car can motivate shoppers to choose an EV just as much as incentives do. Not that incentives aren’t important, but getting the word out is an underutilized tool that manufacturers and dealers should be using to their advantage.

An old axiom in the automobile business is, “The feel of the wheel seals the deal.” Any sales professional knows that people who have questions about a product often put off buying until those questions are answered. They want to know about range, resale value, battery warranties, home charging, and a myriad of other details. Ride and drive events could help answer those questions and calm people’s fears about electric cars.

Will the Electric CARS Act pass? No, it won’t. Not it its present form, anyway. But something like it may wind up passing Congressional muster this year and for that we should be grateful. We can help, of course. We can contact our elected officials and express support for a renewed national EV incentive that will let Tesla and GM compete head to head with Volkswagen, Hyundai, Kia, Lucid, Fisker, Lordstown Motors, and all the other companies that are late to the EV party.

If we own an electric car, we can find ways to take our friends, neighbors, and co-workers for a drive so they can experience the benefits of an EV for themselves. And there is nothing stopping any of us from contacting the suits in the C Suites of companies that sell electric cars in America to encourage them to do a better job of educating the buying public.

The EV revolution isn’t quite over yet. But the finish line is in sight. The day when electric vehicles are no longer a curiosity is at hand. The most comprehensive survey yet finds EVs actually do have lower maintenance costs. Researchers in Germany say if people knew how much their cars actually cost to own, that knowledge would reduce the number of cars on...

The EV Tax Credit Debate Heats Up In Congress

The Driving America Forward Act would extend the federal tax credit to the first 600,000 electric cars from each manufacturer. It has bi-partisan support,...