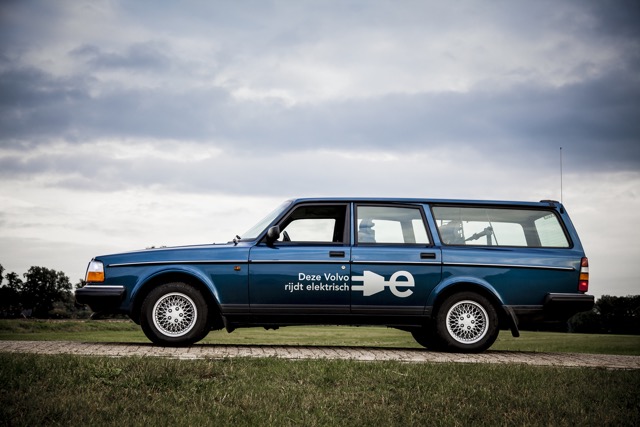 The classic Volvo 240 GL wagon is one of the most iconic automotive shapes of the last forty years. How much of that is due to general good taste and how much of is due to Volvo’s use of 660 steel in the cars’ construction — which means that these cars haven’t rusted away like many of their contemporaries — is a matter of debate, of course. What isn’t up for debate, however, is that most of the remaining Volvo 240 GLs out there would be greatly improved by replacing the wheezy old 114 HP 4-cylinder engine under the hood with something … a little bit more modern.

That’s the basic idea behind the car you see here. Built by Martijn Hendriks to launch his electric car conversion company, Volvo e-Mobility, way back in 2012, this well-preserved 240 GL was a labor of love that took nearly three years to fully restore and complete.

From the outside, there’s not much to see if you’re not a die-hard Volvo fan. It looks just like any other 30- or 40-year-old Volvo 240, albeit a really, really nice one.

Once inside, though, even the most inexperienced Volvo observers will see something that doesn’t look like it quite belongs.  That’s not to say Hendriks didn’t do a masterful job of integrating the EV’s “juice-ometer” into the car’s dash — far from it! It’s just that that fuel gauge is obviously not stock, you know? Classic, with a modern touch by Volvo e-Mobility.

Beyond the dash, though, there really isn’t anything to visually confirm that this old Volvo is actually electric. Whether or not that’s a good or bad thing, however, is up to you.

As for the conversion itself, Hendriks’ 240 GL isn’t exactly a dragster. Still, he claims that it is capable of highway speeds and good for 150-200 km of driving range with a full charge (about 100 miles). That’s not bad, considering the car was built using 2009 levels of technology. What’s more, the car is still around! In 2015, Hendriks took the car to an EV event at Harrie Arendsen Volvo in Ruurlo, Netherlands, where he gave a slideshow presentation about his process with the car, and some of the experiences he’s had in nearly ten years of driving his creation.

What do you guys think? Is the Volvo 240 GL a great platform to build an electric classic car of your own, or do your tastes skew more towards an old Cobra or Bronco? Check out this video of Hendriks’ classic brick, as well as a few photos from his website, below, then let us know your take in the comments section at the bottom of the page.