Even in an era of deep partisan division, planting trees and restoring forests to the United States’ natural and working landscapes represents a shared priority of both U.S. political parties. Republican leaders repeatedly affirmed their commitment to the Trillion Trees Initiative, and President Trump recently signed an executive order that establishes an interagency council to coordinate federal restoration and conservation activities. Meanwhile, congressional Democrats included forest restoration and protection as key climate strategies in reports released by the House Select Committee on the Climate Crisis and the Senate Democrats’ Special Committee on the Climate Crisis. Despite the bipartisan rhetoric on tree planting, few concrete actions have moved forward to grow and protect more trees in the United States. Many are hoping that the new administration of President-elect Joe Biden and an almost evenly split 117th Congress will be able to change that when they take office in January 2021.

On November 9, a coalition known as the Forest-Climate Working Group with diverse interests across the forest sector — including forestry businesses, conservation nonprofits, academic institutions, state foresters and private landowners — released a policy platform that aims to increase the ability of U.S. forests to fight climate change. WRI’s independent research has found that three policies included in the group’s platform could play a particularly important role in restoring trees to U.S. landscapes.

If enacted, these policies could help kickstart a robust national plan for carbon removal, and would put the United States on a path to grow up to 60 billion new trees in the next 20 years. A tree restoration campaign of that size could remove up to 540 million tons of CO2 per year by 2040 — an amount equal to the entire annual emissions of U.S. agriculture — while creating more than 150,000 jobs. 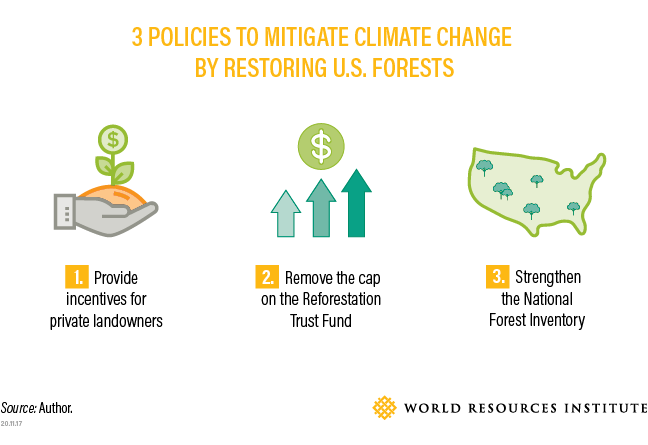 Here are three of the most impactful steps that President-elect Biden and the new Congress can take to harness the carbon-removing power of trees and forests in the United States:

Most forestlands in the United States are privately owned. Therefore, private lands offer the greatest potential for growing new trees. Private landowners must shoulder significant upfront costs — ranging from $50 to over $500 per acre — to plan and implement a tree restoration project. The federal government can ease that burden by giving landowners financial incentives to enhance carbon removal through tree restoration.

One way to incentivize landowners would be through a transferable tax credit. The value of the tax credit could link to the amount of carbon removed by trees and forests on a property above baseline levels, similarly to how section 45Q of the Federal Tax Code awards credits for carbon removed by technologies like direct air capture. The tax credit policy also should include provisions to account for lifecycle carbon impacts of tree restoration projects — including emissions from forest clearing or timber harvest — and avoid double-counting with forest projects registered in carbon markets.

For landowners who do not have the money or resources to measure carbon removal, such as small or disadvantaged landowners, the tax credit value could link to an approved set of practices that remove additional carbon from the atmosphere, such as planting windbreaks around croplands or removing competing vegetation to promote forest regeneration. Smaller landowners without significant tax liability could still earn the full value of the incentive by selling or transferring the tax credit to another taxpayer with greater liability.

Congress could also use direct payments to incentivize tree-planting and forest restoration on private lands. To achieve the full potential amount of carbon removal from trees and forests, Congress would need to appropriate an additional $4–4.5 billion per year for tree restoration activities through existing U.S. Department of Agriculture (USDA) programs like the Environmental Quality Incentives Program (EQIP) and the Conservation Reserve Program (CRP), as well as grant programs for local jurisdictions.

A well-designed transferable tax credit for tree restoration or a comparable investment in USDA direct payment programs could be a powerful tool to accelerate carbon removal in privately-owned forests. 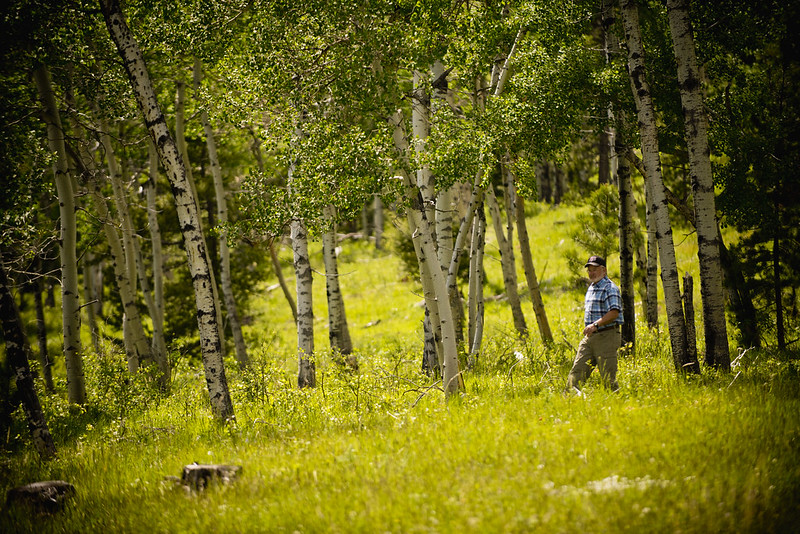 Private landowners — such as this man near Clancy, Montana — can restore healthy forest ecosystems with additional support from the Environmental Quality Incentives Program (EQIP) and other federal conservation programs. Photo by USDA NRCS Montana/Unsplash

2. Remove the Cap on the Reforestation Trust Fund.

While growing trees on private lands may hold greater total potential for carbon removal, restoring forests on federal lands arguably presents one of the most urgent opportunities for climate action. In Western states, fires burned through millions of acres in 2020 alone, with 2 to 6 times more forest land predicted to burn annually by 2050. In recent years, pests like mountain pine beetle have also killed trees across millions more acres of forest.

Many of these areas need human intervention to restore and manage forests in ways that will make them more resilient to future fires and pests. An upcoming research paper from The Nature Conservancy estimates that 12 million acres of federal lands are now in need of reforestation, including 7.7 million acres within national forests. The federal Reforestation Trust Fund, established by Congress in 1980, can only distribute $30 million per year due to a cap in the original legislation. This money only allows the U.S. Forest Service to support 100,000 acres of reforestation annually — less than 2% of the needed reforestation.

Removing this outdated funding cap from the Reforestation Trust Fund is a common-sense first step to help the Forest Service begin to catch up on their backlog of reforestation projects. The fund could provide over $100 million from existing tariffs on timber products to support increasing climate resilience and enhancing carbon removal on federal lands. The bipartisan REPLANT Act, which already has support from President Trump, would do just that. If Congress doesn’t pass this bill in 2020, it should be a top priority for President-elect Biden and congressional leaders of both parties in 2021.

U.S. forests and forest products annually remove over 11% of U.S. carbon emissions from the atmosphere, based on data from the U.S. Forest Service’s Forest Inventory & Analysis program (FIA). High-quality data are critical to advancing climate action in U.S. forests, as both the federal and state governments rely on FIA data to monitor forest health, plan forest management strategies and track forest growth and loss.

While FIA is a globally leading source of forest carbon data, it is not designed to meet current demands for precise information on carbon emissions and removals at different scales and frequencies. For example, FIA data are not collected frequently enough to consistently identify the impact of wildfires on forest carbon. They also cannot support precise forest carbon estimates over a small geography, like a county or protected area. Even at the national level, estimates of forest carbon are subject to more than twice as much uncertainty as emissions estimates for all energy use.

There are many options available to strengthen forest carbon data, but the single most powerful measure would be to integrate remote sensing data into the U.S. forest inventory. Recent advances in mapping can more accurately show where trees are growing and storing carbon. Lidar — which uses laser beams to record three-dimensional information like tree height and forest structure — can pair with FIA measurements to produce more precise carbon estimates at a higher resolution, and at a fraction of the cost of taking additional field sample measurements.

With a new grant from the Bezos Earth Fund, WRI and partners seek to develop a satellite-based system to monitor and measure carbon emissions and removals across the world’s forests and other lands. Integrating innovative monitoring approaches like WRI’s with FIA’s wealth of field data and NASA’s cutting-edge research technologies could provide communities, governments, investors, non-government organizations and others with high-quality data to help them pursue strategies for natural solutions that address the climate crisis. These solutions can in turn support economic recovery, improve equity and enhance resilience.

Investing in the Future of United States Forests

Growing trees and restoring forests to accelerate carbon removal represents one of the most promising avenues for bipartisan federal action on climate change in the months ahead. Businesses, environmental groups, universities and state governments agreed on a platform of common-sense policy solutions to grow more trees — including creating a carbon removal tax credit, investing in reforestation on federal lands and strengthening the national forest inventory. These policies should feature in a broad plan to tackle the climate crisis under the Biden administration.

A comprehensive policy plan must also confront the current and likely future sources of greenhouse gas emissions from forests and land use. Priorities for emissions reduction include protecting the massive carbon stores built up over centuries in old-growth forests like the Tongass National Forest, rebuilding United States support to stop and reverse deforestation in the carbon-rich tropics, managing Western forests to be more resilient to future fires and reducing emissions from U.S. agriculture to ensure a food-secure future, while leaving more land available to grow trees. Accelerated carbon removal and ambitious emissions reductions from all sectors of the economy, including forests and land use, will be necessary to keep U.S. emissions on a trajectory aligned with the goals of the Paris Agreement.

President-elect Biden and leaders in the House and Senate now have a chance to lead on climate change by standing up for forests. To do so, they will need to turn their words of support into action.