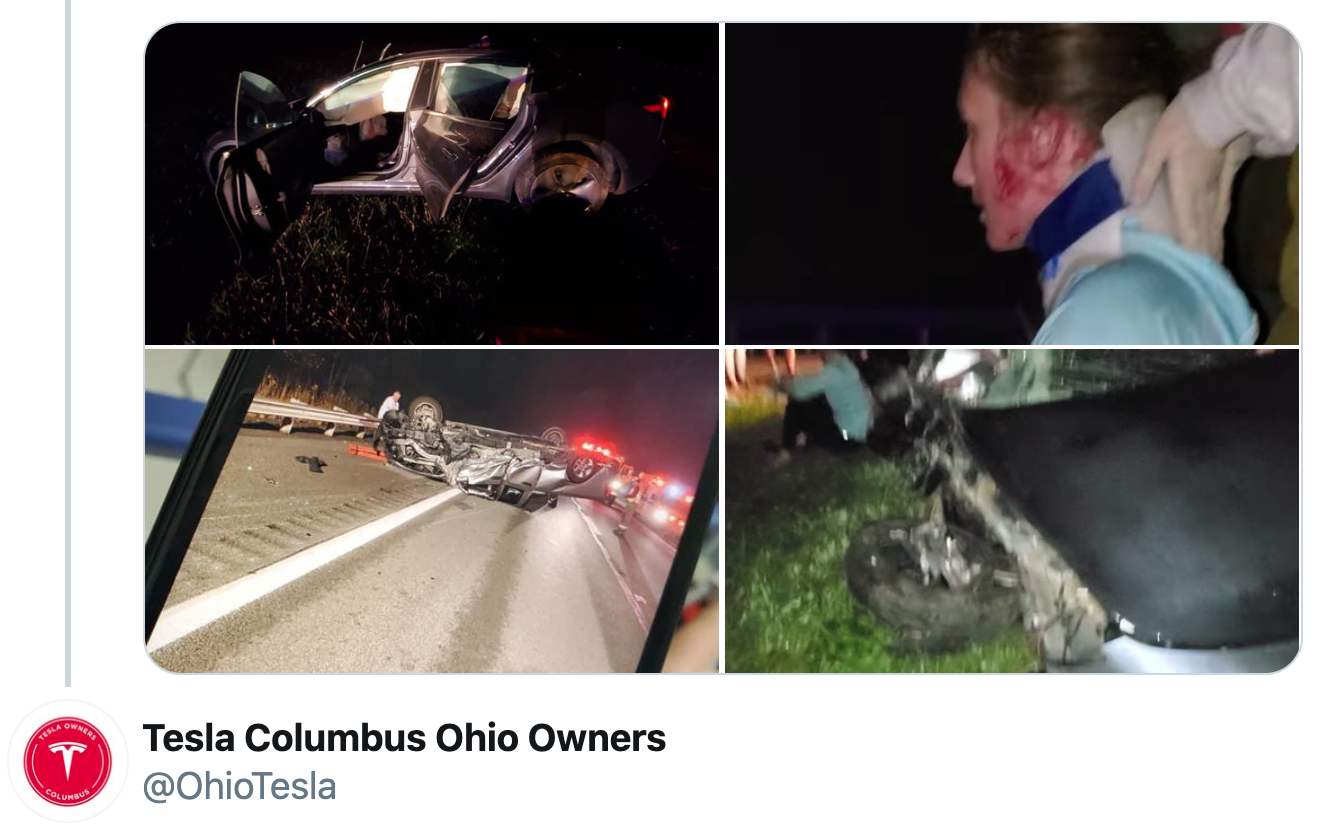 It’s a horrifying ordeal and one that often ends in tragedy. Jen Dunlap, a member of the Tesla Columbus Ohio Owners Club and owner of a Tesla Model 3, was in her car with her friend when a drunk driver crashed into them. They were hit head-on by the driver, who was driving in the wrong lane on a highway. The driver was driving a truck and both vehicles were going over 70 mph (113 km/h).

@JenDunlap_ walked away with minimal injuries (sprained ankle, broken rip) and her friend is still in the hospital being monitored but things are looking positive. #dontdrinkanddrive

Elon Musk responded by saying that he was glad Jen is safe. Following that, the person behind Tesla Owners of Silicon Valley shared a horrifying ordeal of his own that he survived. He had a Ford F-150 hit him while his son was in their family’s Model X. But the Model X barely moved. “I don’t feel safe driving anything else,” he said on Twitter.

I had a f150 hit me and my son and the model X barely moved. I don’t feel safe driving in anything else.

I personally find it pretty devastating that people opt to make such selfish decisions — knowing and not caring that their choices could take a life. In the case of Jen and her friend, they were spared, barely. However, many are not. On average, around 30 people in the U.S. die each day in accidents that are caused by drunk drivers. That is around one person every 50 minutes. The NHTSA noted that these deaths have fallen by a third in the last three decades, but despite that, people who make the choice to drive while intoxicated take more than 10,000 lives annually. In 2018, there were 10,511 deaths from crashes that were caused by drink drivers.

These deaths are 100% preventable, yet they still occur due to the selfishness and carelessness of those who “feel fine enough to drive.” While many people get drunk for various reasons, alcohol reduces the functions of the brain. It impairs thinking, reasoning, and muscle coordination. In other words, it slows down your ability to think critically and reasonably, while also slowing down your ability to take fast actions. If you’re going to drink, don’t drive. Instead, make a plan to get home safely if you’re at a club, or stay home and drink there since we are still in the age of Covid-19 anyway.

Even though there are laws against it, people still drive while intoxicated. Even though it’s been proven time and again that this often leads to fatalities, people still do it. The NHTSA pointed out that 1/3 of all traffic crash fatalities in the US involve drunk drivers who have blood alcohol levels higher than the legal averages. These crashes do not have to happen, but they still do. The NHTSA also reported that men are the most likely to make these choices — “21% of men were drunk in these crashes, compared to 14% for women.” The NHTSA stresses that even though it is illegal in every state for people to drive with a BAC of .08 or higher, one person was killed in a drunk-driving crash every 50 minutes in 2018 across the country.

Teslas Are The Safest Cars

In 2018, data from the National Highway Traffic Safety Administration (NHTSA) showed that the Tesla Model 3 was the safest car it had ever tested, that it has the lowest probability of injury in a collision of any of the 900 cars the NHTSA has tested. Behind that was the Tesla Model S, and in third place was the Model X. Catching a trend? Tesla makes the safest cars ever. Not only is this a major achievement, but it is astounding that it is one taken by a young company like Tesla. One would think that industry giants such as Toyota or Ford would be able to claim this leadership position, but sometimes it’s the newer and younger companies that have a fresh perspective on important factors, such as safety.

One of the key components that contributes to Tesla’s safety record is the Model 3 vehicle’s roof. In other cars, the metal panel that forms the roof is usually the weakest part, and during accidents that cause the vehicle to roll over, these provide little protection for the passengers. Tesla’s vehicles have glass roofs that are thicker than the thin metal panels in the other vehicles and very hard to break. All Tesla models also have large crumble zones, which means the car has plenty of space and material in place to absorb the impact of another car or object slamming into it before that threatening force reaches the passengers. Furthermore, with batteries spread across the base of the car, every Tesla has a very low center of gravity, which makes it super difficult to flip the car over.