Fires blazing across the Western United States have claimed dozens of lives, destroyed countless properties, displaced hundreds of thousands of residents, and worsened air quality at a time when the coronavirus pandemic threatens respiratory health. The ominous skies are a preview of what’s to come in a world of continued inaction on climate change. What was seemingly a distant future is now playing out in front of our eyes.

Wildfires in the Western United States, and around the world, are getting worse. Fires in Oregon, Washington and California for the last month are off the charts compared to previous years — and fire season is still not over.

But what’s more troubling is that fires are not growing in isolation. Fires are just one piece of a multi-part climate feedback system — all of which are worsening, fueling more rapid climate change. 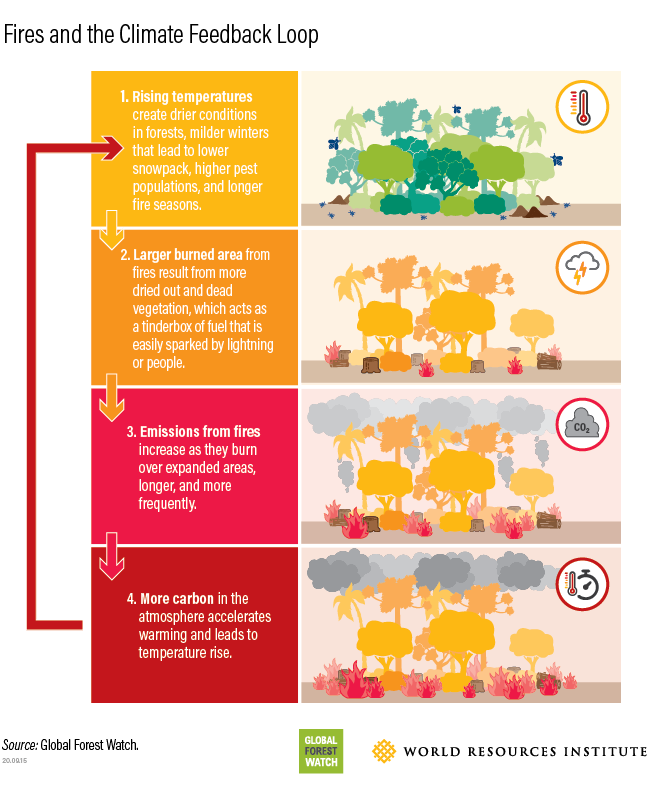 The data show that each aspect of this cycle is getting worse:

Temperatures on the U.S. West Coast have risen by 1.5-2 degrees F since the beginning of the 20th century.

Temperatures in California, Washington and Oregon have increased noticeably since the beginning of the 20th century. Washington state has been 1.5 degrees F warmer on average, and Oregon and California have seen temperatures that are 2 degrees F higher. At the same time, rain has increasingly replaced snow in the Northwest, warmer temperatures have reduced snowpack, and soils are drying out. All of these factors combine to create drier conditions that allow wildfires to ignite and spread.

The U.S. West Coast is on track to surpass annual burned area records.

The western U.S. wildfire season has lengthened by about three days per year since the 1970s due to rising temperatures and snow melting earlier in the season. Elevated temperatures dry out vegetation, which then acts as a tinderbox for fires. Despite the risks wildfires pose to homes and lives, housing growth in once sparsely settled areas near forests and other vegetation has also increased rapidly, leading to more wildfires from human-caused ignitions and more loss of property.

Whether ignited by human activity or lightning strikes, there’s a greater likelihood of fires burning out of control. As these conditions worsen, the overall burned area expands.

Burned area has increased across the United States over the past two decades, and 2020 is particularly bad. The West Coast is on track to see more area burned in 2020 than any other year. In California alone, wildfires have already destroyed an area almost the size of the state of Connecticut (3.2 million acres).

The most recent science suggests that with further warming, the Western United States could see 2 to 6 times the annual area burned in 2050 than it does today.

Emissions from 2020’s fires are 3 times higher than usual.

As fires burn, carbon stored in trees and other vegetation combusts, releasing carbon dioxide and other potent greenhouse gases such as methane and nitrous oxide into the atmosphere. This means that as fires increase, so do emissions.

While emissions from fires contribute to the warming that begins this vicious cycle, they are far from the only source of carbon dioxide emissions. Burning fossil fuels — for example to power our homes and our cars — is the leading source of emissions globally.

This buildup of greenhouse gases in the atmosphere is rapidly warming the planet. 2019 was the second-warmest since modern record-keeping began, after 2016. The past decade was the warmest on record, with each decade warmer than the one that preceded it.

With proper management, fire regimes are a natural and important part of maintaining the long-term vitality of forests across the Western United States. However, we need to be smarter about where we build and rebuild our communities. New housing is increasingly moving closer to forests and other natural vegetation, leading to more wildfires from human-caused ignitions and greater losses to human lives and property. A tiny spark now has potential to cascade into a raging fire, fueled by higher temperatures, drier conditions and rising emissions.

But more importantly, we need to rein in greenhouse gas emissions. If we want to put an end to these record-breaking fires, it’s critical we address the climate feedbacks that are fueling them in the first place.