Editor’s note: We have written about GM’s new partnership with EVgo to add 2,700 EV fast charging stations across the United States in the next 5 years a couple of times. However, this piece below offers some useful context to the news by adding information (charts!) on the current EV fast charging landscape across the country. So, check out this repost from EVAdoption below.

General Motors and EVgo this past week announced plans to triple the size of EVgo’s public fast charging network by adding more than 2,700 new fast chargers over the next five years. The new EVgo fast charging stations will be available to customers beginning in early 2021. This partnership is not related to GM’s announcement in 2019 that it would be partnering with Bechtel to build out a fast-charging network across the US.

The stations will have 100–350-kilowatt capabilities to support the growing number of electric vehicles coming to market that can charge at higher rates. According to the joint GM and EVgo press release, most of the new locations will be able to charge at least four vehicles simultaneously.

The new fast charging stations will be located in both urban city locations and suburbs, providing increased charging access to drivers who live in multi-family dwellings and can’t install chargers, or who might not have access to workplace charging. EVgo CEO Cathy Zoi shared that this partnership with GM would be focused on urban locations and specifically target the needs of apartment dwellers and ride-share and food delivery drivers.

“We are seeing an increase in people who live in apartments and ride-share drivers needing convenient fast charging.” — Cathy Zoi, CEO of EVgo

This approach to markets and locations builds on EVgo’s existing portfolio of more than 800 station locations across the United States that are installed at grocery stores, retail outlets, entertainment centers, and other high-traffic locations. According to EVgo, 115 million Americans already live within a 15-minute drive of an EVgo fast charging station, and the company has 200,000 customers in 66 markets.

The GM and EVgo initiative will focus on 40 key metropolitan areas, which were not announced, but the two companies will provide more specific details on their plans in the coming weeks. In response to a reporter’s question about underserved markets during the press briefing, Barra cited that California, the state with the highest adoption of EVs, still needs more charging infrastructure, but mentioned that Florida, Texas, and Illinois are key growth opportunities.

EVgo is just behind Tesla’s Supercharger network in terms of charging locations, with 807 DCFC locations versus 830 for Tesla as of June 30, 2020, according to my analysis using data from the Alternative Fuels Data Center. EVgo is just about 70 locations ahead of ChargePoint, but has about 1.8 times the locations as Electrify America, the Volkswagen-funded network launched from the Dieselgate scandal. Where EVgo falls behind is in the actual number of fast charging connections, with 1,338, putting the company in 4th place, and at well less than 1/5th the number of Tesla Supercharger connections. Electrify America and ChargePoint have been averaging an additional few hundred DCFC connections the last few years, so at an average of 530 new connections over the next 5 years, EVgo could surpass both of those networks around 2022–2023. 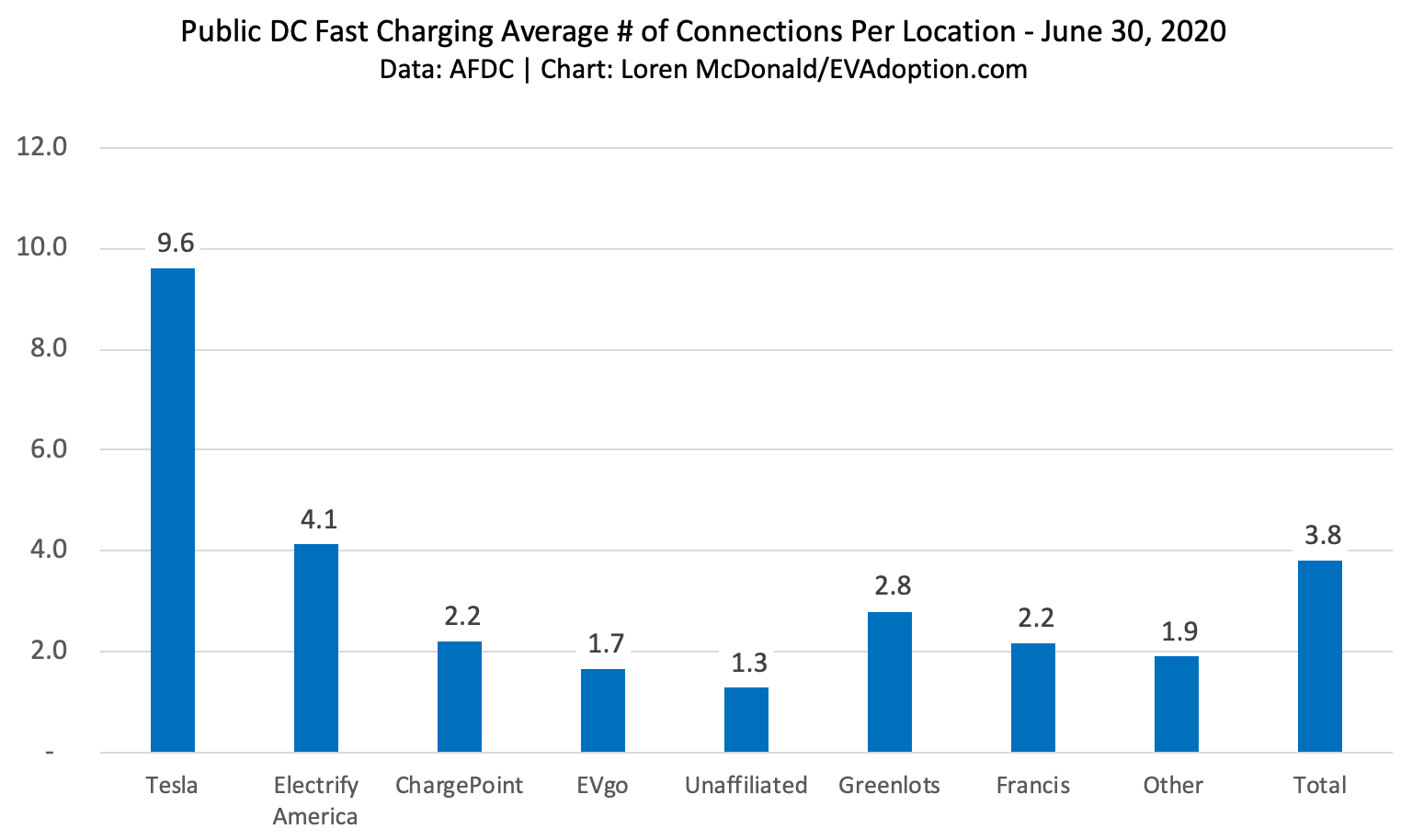 In response to my question to EVgo’s PR team, I received the following quote:

“Customers need more locations in and around where they live, and providing a mix of charger locations with four, six, eight or more connections allows EVgo and GM to meet market needs.” — Jonathan Levy, senior vice president of business development at EVgo

“We know how important the charging ecosystem is for drivers, one that includes access to convenient and reliable public fast charging,” said Mary Barra, GM Chairman and CEO. “Our relationship with EVgo will bolster the public fast charging network available to EV customers ahead of increased market demand and reinforce our commitment to an all-electric, zero-emissions future.”

GM and EVgo would not share specifics on the dollars that would be invested, but they will leverage private investment and government grant and utility programs to help fund these 2,700 additional DC fast chargers. Zoi shared that EVgo is in active conversations with Congress to include investment and incentives in the COVID-19 stimulus package.

Have a tip for CleanTechnica, want to advertise, or want to suggest a guest for our CleanTech Talk podcast? Contact us here.
In this article:Blink, chargepoint, Electrify America, EV Connect, eVgo, francis, GM, Greenlots, OppConnect, Tesla, Volta, Volta Charging, Webasto