A year ago, I didn’t know much about crossovers, so I researched them and wrote an article about why they are so popular. On Monday, I finally got to drive a Tesla Model Y at the Tampa Delivery Center.

Tesla sent me an email (it probably went to their whole mailing list in Tampa, but it may have been just a portion to avoid a rush) inviting me to make a reservation to test drive the car. On Saturday and Sunday, I was busy installing a 50 amp plug to charge my Tesla (article coming soon) and installing a new ceiling fan in my new townhouse, so I saved the test drive till Monday. I was surprised that when I called at 2:30pm, I could get a same-day test drive (they have only one Model Y to test drive in Tampa).

I’ve owned my Tesla Model 3 for about 23 months and I drove a Model S recently (article coming soon about that). I’ve also driven a Model X for a week as a referral prize. I’ll compare the driving experience to all of those, the Honda Odyssey Minivan I had for 150,000 miles, and my mom’s Honda CRV that I frequently drove when visiting her in Iowa. 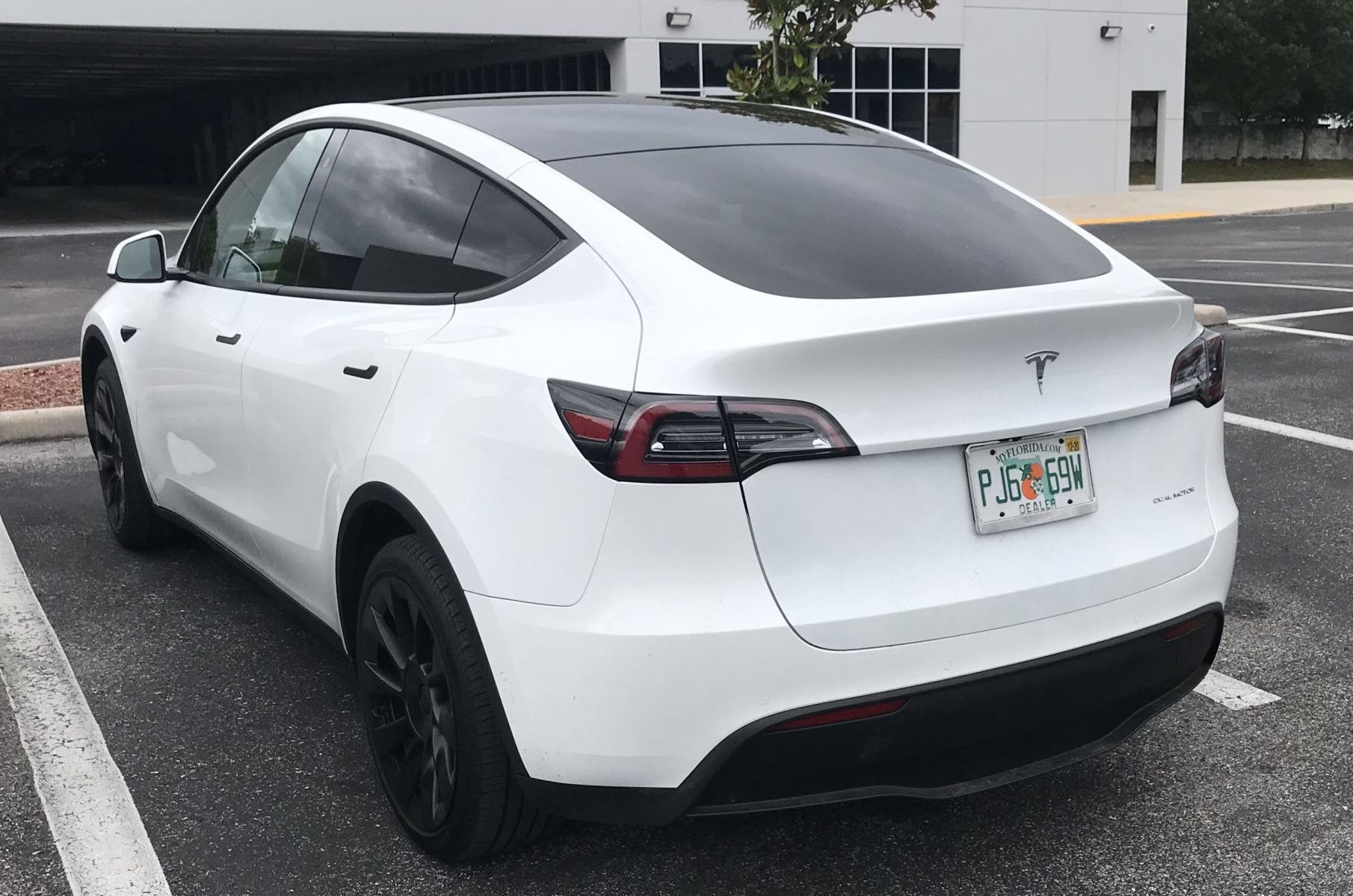 I love the wheels and the chrome delete, especially on the white.

Very sleek for an SUV! As I arrived at the Tesla Tampa Delivery Center, I noticed they had about 80 new cars in the parking lot (usually they have the new cars hidden in the giant parking garage) and I wondered if I would be able to easily identify the Model Y. I saw this tall chrome-deleted Model 3 and I figured that was it. Some of the Model 3’s also look like that have chrome delete, though, since they have blue plastic on their door handles (to protect them in shipping). The 20″ black induction wheels (which also appeared on several Model X’s in the lot) was also a giveaway. I think they look great, especially on the black and white Model Y’s.

When you arrive, the sales associate asks for your driver’s license and a few other personal details, like your phone number and email, and then wipes down the car, hands you the key card, and asks for you to return in 20 minutes. I told him I was a Model 3 owner, so he didn’t need to explain how to drive the car. It is just like driving the 3, except you sit higher.

The first thing you notice when you get in is that it is just like a Model 3, except you sit a little higher. That means it is a little easier to get in and out, and if you are one of the many people who likes to sit a little higher so that you can see better, you will like that immediately. I never really noticed that being 6 inches taller lets me see any better. The acceleration was a bit better than my Model 3, but that is because I have a Long Range Rear Wheel Drive (RWD) and this was a Long Range All Wheel Drive (AWD).

I took several sharp corners to see if I could notice the increased body roll with the Y vs. my Model 3. I couldn’t tell the difference. I’m not saying there isn’t a difference. A car that sits higher must have a little more body roll unless the springs are a lot stiffer or a sway bar or other component counteracts. So, it probably does roll more, but I sure couldn’t tell the difference. [Editor’s note: I’ve been with Paul while he’s testing body roll — he doesn’t joke around. Also, Roger Pressman, cofounder of EV Annex who has owned a Model S, Model X, Model 3, and now Model Y told us something similar in a recent CleanTechnica webinar, which he and I found surprising just as Paul apparently did —Zach.]

Driving the car felt like 80% Model 3 and 20% Honda CR-V or Honda Odyssey. The screen, sounds, acceleration, and handling were all 100% Model 3, but the seating position and visibility were similar to a Tesla Model X, CR-V, or Odyssey (the only 3 higher riding vehicles that I’ve spent some time driving). It was also the first car with the “stops for red and green lights” Autopilot software and hardware installed that I have driven, so I had to try that out too. (I liked it and should have that in my Model 3 in a month or two when they upgrade my FSD computer.)

Although the car has about the same amount as room as the Model S (and almost as much as a Model X), it really drives much more like the Model 3. I did notice the view through the rearview mirror is quite poor. The problem isn’t the mirror, it is that the rear window is high and they don’t have a transparent panel in the back like the Prius. I can use the visualizations, sideview mirrors, and rearview camera to compensate, but it is one of the few drawbacks to the car. The Model 3 doesn’t have great rear visibility either, but the Model Y’s is a bit worse. It is very comfortable back there.

The back seat has a lot more legroom for a tall (6 foot 2 inches) person like me. I forgot to play with the reclining seat, but I’m sure I would like that feature on longer drives. This car seems to be much better for Uber/Lyft/robotaxi use than the Model 3.

Impressions of the back of Tesla Model Y. I forgot that you have to hold the button for 5 seconds to get it to save the height. pic.twitter.com/Jy8TkYFbdf Testing out the back for camping. Since I sleep on my side and bend my knees, I do not need to stretch out like this. The area in the back under the panel is very large.

There is a lot of room to carry sports gear or a bicycle or whatever you bought at a garage sale in the back of the Model Y. There’s not as much room as a pickup or a minivan offers, but a whole lot more room than the Model 3! As far as sleeping in the back, which I’ve done in the Model 3, there doesn’t really seem to be any extra length, but there is more width, which means 2 average sized people could sleep there, whereas the Model 3 only has room for two thin people (or two very cozy people).

I’ve been a fan of the Model Y since I first got to see it at the unveiling a year ago. The media was disappointed because (unlike the Cybertruck), it didn’t have anything shocking to report about it (except the 3rd row, which is still a bit of a mystery on whether adults will be able to sit there or not). What many missed is that the Model Y doesn’t have to make huge advancements like the Model 3 did. The Model 3 is something like 5 or 10 years ahead of the rest of the auto industry in so many areas that Tesla didn’t need to change all those market-leading things like the software, Autopilot, battery, motors, safety design, etc. It just needed to solve 4 problems that prevented millions from buying the Model 3.

Other than those 4 issues (which millions of people don’t care about, but millions of other people do care about), the Model 3 is a great car. Now that the Model Y is available (kind of available — the design studio says you can expect to wait 4 to 8 weeks to get your Model Y), I expect it to sell even better than the Model 3, once they can make enough of them to satisfy the demand.

So, when am I buying a Model Y? I’ve ordered a 7 seat version, but depending on what I think after sitting in those 3rd row seats, I might just get a 5 seat version. As an empty nester, I don’t even have 5 people in the car that often, but I don’t want to spend an extra $3,000 for the 3rd row if it isn’t usable. I’m an optimist and think it will be useful, but I could be wrong. I can wait another 6 to 9 months to be sure. The Model 3 I own is meeting 99% of my needs.

For people trying to decide whether to buy the Model 3 or Model Y, if you are trying to save money and don’t need the range, the Model 3 is a lot cheaper if you get the Standard Range or the Standard Range Plus ($35,000 or $38,000 versus $53,000 for the cheapest Model Y). If you are getting the Performance model, I think the 3 is more appealing since it is about $6,000 cheaper, a little quicker, and has track mode. I really think they should add track mode to the Model Y and think they probably will once they can make a few more. The car will be a blast on the track, but a lot more fun if you can adjust the stability control with track mode to drift easily.

If you are getting the dual motor, long range version of one of these, the Model 3 is once again $6,000 cheaper and a bit quicker, but I don’t think at the $50,000 price range most people will mind the $6,000 too much, and I also don’t think they will notice 4.4 seconds 0–60 mph over 4.8 seconds. I do think everyone will notice the 4 key features I mentioned above, and if any of those 4 matter to you at all, I recommend you get the Model Y over the Model 3.