The Republic of Korea’s response to COVID-19 has been among the most effective in the world. By combining aggressive testing with early isolation and treatment of those who test positive, Korea has lowered its infection rate while avoiding the need to lock down entire cities. The government reorganized hospitals to prevent infection, effectively distributed face masks, and will cover all COVID-related medical costs. After peaking at about 800 new cases per day in March, Korea had only 14 on April 28.

At the same time, Korea has put forward a high standard on addressing climate change. The governing Democratic Party of Korea made a campaign proposal in March 2020 to reduce Korea’s emissions to net-zero by 2050. Experts say that reaching net-zero emissions is necessary to avoid the worst damages from climate change. The campaign manifesto suggested putting a price on carbon, phasing out coal financing, and increasing renewable energy as pathways to get there.

The party won a landslide victory in legislative elections on April 15 and can now turn this promise into reality. This would make Korea the first country in Asia with a net-zero target.

Korea now has a significant opportunity: If it follows through on the campaign proposal, it will serve as an example for other countries on how to address COVID-19 while taking ambitious climate action. This would not only position the country as a climate leader, but also pave the way for long-term and sustainable economic recovery after the pandemic.

Korea Embraced Sustainable Economic Stimulus in 2009. Will it Lead Again?

In 2009, Korea responded to the global financial crisis by announcing $60 billion in stimulus spending for  green measures like river and forest restoration, rail transportation, energy efficiency and fuel-efficient vehicles. The green spending made up about 69% of its total stimulus spending¹, which was the highest proportion of green stimulus to total stimulus of any country in the world (though $20 billion of that was spent on a controversial river restoration project that involved building dams). In part due to the green stimulus package, the increase in Korea’s unemployment rate from the end of 2008 to the end of 2009 was the lowest among the OECD, a group of high and middle-income economies. Korea’s GDP also rebounded from the economic crisis faster than expected and faster that the OECD as a whole. Subsequent research suggested that Korea could have created even more jobs if it had invested more in renewable energy instead of the dam project. 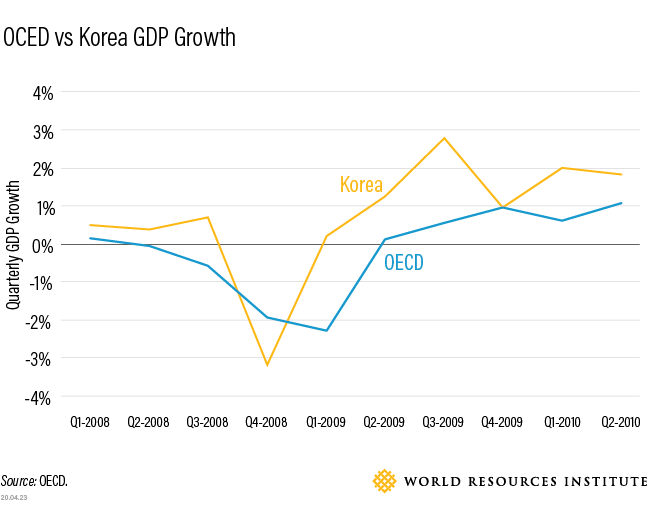 Korea’s GDP rebounded faster than any other OECD country after the 2009 global financial crisis, in part due to economic stimulus spending in green measures.

Today, Korea has a chance to make its economic recovery to the COVID-19 pandemic a part of its transition to a net-zero carbon future. Most of the government’s response so far has focused on stabilizing the financial system, promoting good health care and supporting households and businesses, but there is also some troubling fossil fuel spending. Public finance institutions provided an $825 million emergency loan to bail out Doosan Heavy Industries, which receives 80% of its revenues from coal plants. Environmental campaigners noted that Doosan was in financial crisis long before COVID-19, with its share price falling 93% between 2010 and 2019.

As Korea thinks about the longer-term economic recovery plan, it should reflect on the outcomes of 2009 and consider carefully how it can use the economic recovery to accelerate the low-carbon and climate resilient transition the country needs. In a small initial sign of green stimulus, Korea increased the subsidy for residential and commercial rooftop solar panels, but more can be done.

Korea is in a position to double-down on its low-carbon commitment while simultaneously achieving economic recovery in the wake of COVID-19. Two actions could help it get there:

As part of the net-zero manifesto, Korea pledged to end international and domestic coal financing. This would be a hugely important step, because coal is where Korea is still a laggard on climate change, even beyond supporting Doosan.

Korea is one of the three largest providers of international coal finance through export credits, along with Japan and China. From 2013 to August 2019, Korean public institutions financed $5.7 billion worth of coal plants in countries like Vietnam, Indonesia and Bangladesh, with a capacity of 7 gigawatts. Recent research evaluated 10 of the overseas power plants Korea finances, and found that over their expected 30-year lifetimes, the plants are projected to cause more than 47,000 premature deaths. This is a climate and air pollution disaster. To make matters worse, Korea is considering 4.5 more gigawatts of overseas coal plants.

Domestically, Korea still relies too heavily on coal, but is beginning to turn the page. Air pollution caused by coal has risen in the public consciousness and is clearly becoming a priority for the government. Korea temporarily shut down about half of its coal fleet in March to reduce air pollution. It also introduced a UN resolution designating September 7, 2020 the International Day of Clean Air for Blue Skies.

Expanding these efforts to end international coal financing could make a significant impact on air pollution in Korea and globally. Japan and China should follow Korea’s example and start making serious plans to end their coal financing.

Moving away from coal is especially urgent during this pandemic. Initial research found that places with high air pollution have higher COVID-19 death rates. Sticking with coal now would be bad for public health, bad for the climate and bad for business. It is already cheaper to invest in new renewables than new coal in Korea, and within a couple years, it will be cheaper to build new renewables than to keep operating existing coal plants. Korea had a slow start on renewable energy compared to some other countries, but it hopes to increase the share of renewables to reach 20% by 2030, and may increase this further as part of the net-zero plan. This will only be possible if it changes course on coal.

To align with its 2050 net-zero emissions target, Korea needs to increase its 2030 Nationally Determined Contribution (NDC) under the Paris Agreement. Its current pledge to reduce emissions 37% below business-as-usual by 2030 has been evaluated as highly insufficient in its ambition.

Korea’s NDC under the Paris Agreement is much less ambitious than what it pledged back in 2009 under the Copenhagen Accord. The NDC would allow Korea’s emissions to be 81% above 1990 emissions in 2030. Despite setting the bar low, Korea is not on track to meet this insufficient goal. The pathway to net-zero in 2050 must go through 2030 and the NDC target, so it will be essential for Korea to show substantially more ambition in its short-term goals. It must pass new climate policies in energy, transport, land use, and industry to get on track for its net-zero vision.

Korea’s Potential to Build Back Better

Even amidst the COVID-19 outbreak, climate has been an important part of national politics in Korea, so the time is ripe for a change. A poll before the election found that three-quarters of Koreans said that they would vote for parties that promised to respond to climate change. A poll of candidates running for election in Seoul found broad support for a strong response to the climate crisis across all parties.

While there’s room to improve in terms of coal financing and a strong NDC, Korea is already stepping up its response to the climate crisis through its partnerships. It hosts the Green Climate Fund, which helps developing countries reduce emissions and enhance their resilience to climate impacts, and the Global Green Growth Institute, which supports economic development that is socially inclusive and environmentally sustainable. Korea will also host the Partnering for Green Growth and the Global Goals 2030 (P4G) summit, which is now been postponed until 2021. This summit is expected to be a major stepping stone to COP26.

Korea’s COVID-19 response, net-zero emissions pledge and environmental partnerships should serve as inspiration for countries around the world who want to meet health, economic and environmental goals. The nation has set a high bar for what it wants to achieve by 2050. But in order to see success and cement its place as a global leader, the government needs to address current obstacles to climate action and follow through today.

1. Commonly cited data of Korea’s 2009 stimulus puts its percentage of green stimulus to total stimulus at around 80%, but that does not include another stimulus that Korea announced in November 2008. This additional package makes the total share 69%, which is still the most of any country.

Have a tip for CleanTechnica, want to advertise, or want to suggest a guest for our CleanTech Talk podcast? Contact us here.
In this article:COVID-19 and the Coronavirus Pandemic, Global Financial Crisis, Korea This could be big for Hyundai. Investors are always looking for "the next big thing." That new technology or "killer app" that will multiply...

The oil and gas industry has been in a recession, effectively since the global financial crisis 11 years ago. Each year, production volumes have...