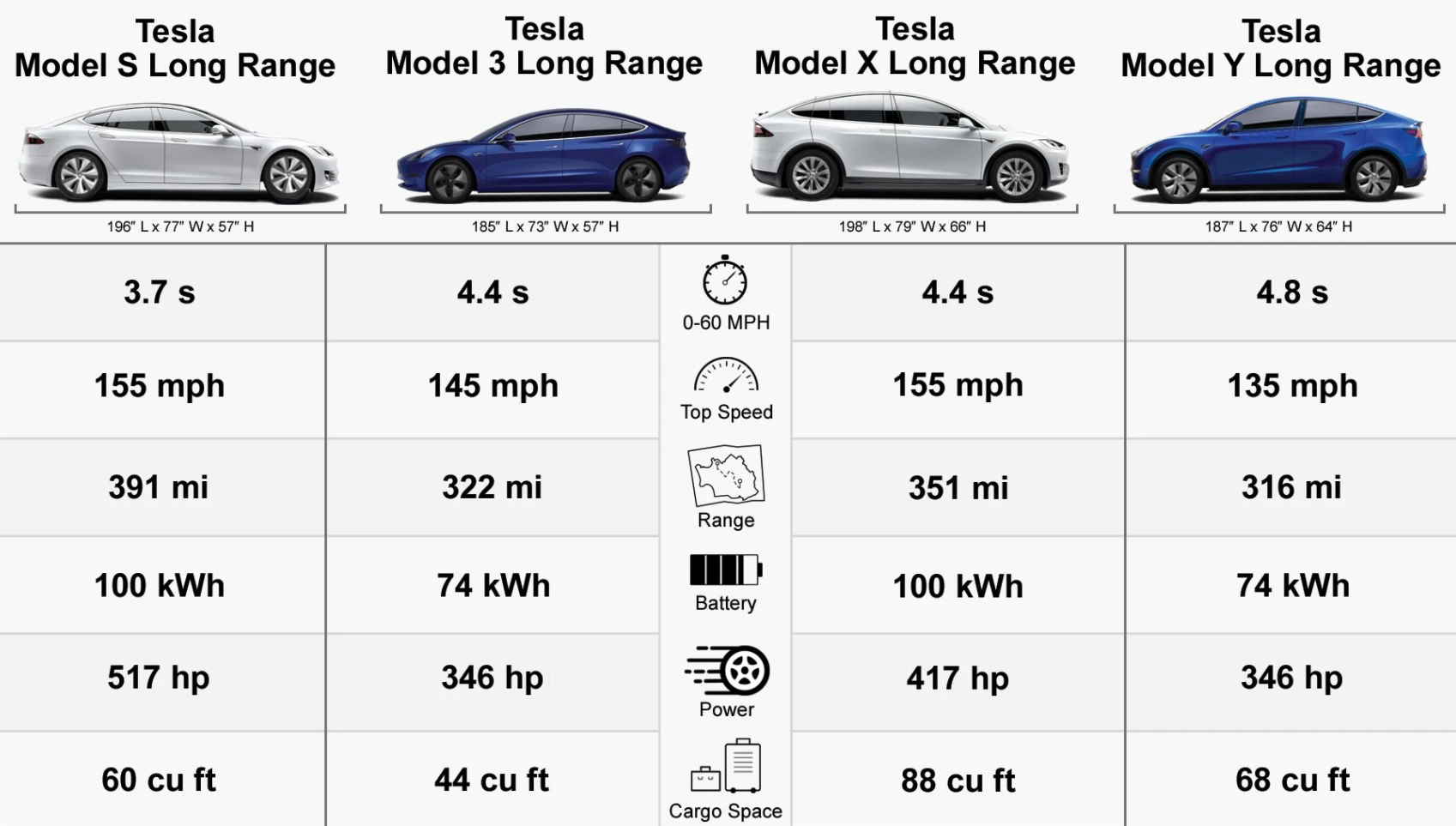 Previously published by EVBite and EV Annex.
By Denis Gurskiy

All Teslas share some similarities. Alongside their striking looks, they each receive a steady flow of over-the-air updates keeping them fresh and more advanced than their closest competitors. Each model (by far) holds the best-in-class electric range. In the EV space, it can be argued that Tesla has really been in a league of its own. As such, it’s useful to compare each against with one another. Tesla vs. Tesla. So let’s dive in and find out which Tesla might be best for you.

Note: we’re using male terms here in the titles — obviously you can easily change these to female terms (e.g. bachelorette) as needed.

For those of you who are living the single life, your choice of which Tesla to buy will be wide open. Essentially any Tesla listed above will be suitable for you.

If you’re into making an impression, either a Model S or X might be the car for you as their imposing size (and price tags) draw attention. Due to how long they have been produced, both of them have been the Teslas that many people associate with the brand. The Model X might be a tad overkill for a single person given its size, but for those who like to drive big cars, it’s certainly a good choice.

For those that don’t need their car to make a bigger statement or (perhaps) want to save their money for bigger things, like maybe a house, going with a Model 3 or Y could be the better option. While the 3 and Y might not make the same impression as the “Faberge egg” design of the Model X, you’ll still get head nods from other Tesla owners and EV enthusiasts.

The Model 3 has been very popular for a reason. Gas car owners have been trading in vehicles ranging from the BMW 3 Series to Honda Civics to get into the popular electric car. It has been outselling basically all of its German competition for years, so that must mean something. Given the Model Y shares over 70% of its parts with the Model 3, it is (most likely) comparable to the Model 3, but in a slightly larger package.

Verdict: The world is your oyster, pick whatever you want. I mean, maybe not the X, it’s kind of big for one person, but who am I to tell you what to do? Want something that makes more of a statement? Take the Model S/X. Looking to save your money for other nice things in life? Take the Model 3/Y.

For those that maybe have a kid or two, your choices aren’t really that much more limited.

Sure, it’s now easier to justify leaning towards the Model X, but basically, any of the Tesla models will work. The 3, of course, will be the smallest and most cramped of the four options, but plenty of people have car seats in cars of equal size or smaller, so I’m sure you’ll be fine. [Editor’s note: As someone with the Model 3 and two young girls, I find the car completely adequate. We also previously had the Model S. I prefer the Model 3. I think we all do. Though, if I was on the market today, I’d probably choose the Model Y, or the Model X if I had enough money for it. —Zach]

The Model Y is (once again) a happy medium and will provide more than adequate space for a child or two in the back without committing to a much larger vehicle.

Verdict: As before, take your pick. It’s now easier to recommend going with the X, but the Y will probably be the most sensible option if you aren’t a falcon-wing door fanatic. The Model 3 will also work, but it will be the most cramped option.

So what happens if you have 4–6 kids or frequently travel with a lot of family members? Well, now your options might be more limited.

However, if you’re willing to wait, your options expand a bit. First off, the Model Y does have a 7-seat option — however, it will not be produced until 2021, so there is a bit of a wait.

Surprisingly, the Model X and Y are not your only options. With the Plaid powertrain version of the Model S looking to launch later this year, Tesla thought it would be a good time to bring back their 5+2 seating that was available in the older Model S. This seating arrangement will have the standard 5-seats but with an additional two rear-facing seats in the back. Obviously, you give up your trunk space when you do this, but it is an option. Keep in mind, you always have the frunk.

Verdict: Need it now? Model X. Can you wait another year? Then, you can add the Model Y or Model S to your list of considerations. Model 3? It’s possible but could get very cramped.

This is probably the most subjective section of an already subjective list. In our opinion, the Model Y provides (perhaps) the best value of any currently available Tesla.

For most people, a range of 300 miles or more is already more than enough for daily driving, so the extra range allowed by the Model S/X are not the biggest advantage given the extra cost. The materials used in the Model S/X interior are not particularly more flashy than what can be found in the 3/Y — at least not for the price difference.

The numbers speak for themselves. And the Model S/X are (now) making up a smaller proportion of sales as time goes by and car buyers see more value in the 3 and now Y. Elon Musk himself has stated that the S/X “are really of minor importance to our future.” They’re both great cars, but when it comes to value, Tesla offers quite a lot when it comes to their lower-priced vehicles.

Given that the Y is so similar to the 3 (with more space) it’s easier to justify the Y because it provides a little more utility than the 3 for a few thousand extra dollars.

The businessman might need a car for travel, lugging around goods, or simply wanting to make an impression. Regardless of your scenario, Tesla will have a car for you.

The Model S is arguably the best looking Tesla. It’ll certainly make an impression on any potential clients and make you look like you mean serious business. It’s built for comfort, so it’s great for those long business trips. Getting some laptop work done while supercharging is easy in the S’s spacious interior. But don’t expect too many work breaks, the Model S is fitted with a ludicrous 391 miles of range.

The Model X sacrifices some range for an even larger interior. And with the “hummer tax” rebate you can save tens of thousands on a brand new Tesla Model X. In the right scenario, Tesla’s most expensive vehicle could actually come out as the most affordable. I’m no accountant nor am I qualified to speak on the situation but if you have a business, ask your accountant about Tax Code 179.

Verdict: While the Model S certainly strikes a pose, the Model X is comfortable for travel, great with storage, and comes with a nice tax break.

Note: The upcoming Tesla Cybertruck could potentially be the best of all worlds. A utility vehicle designed for labor-intensive work, a look that no one will forget, a spacious interior and loads of range. We might just have to revise this verdict one day.

Now to my favorite section, Performance. Each Tesla model has a performance version that will put nearly all competitive gas-powered cars to shame.

Make no mistake, whichever performance Tesla you get, you will smoke basically any other car in your class. But of course, not every one of these Teslas will have the same driving dynamics, as some will handle better than others. Obviously, It makes sense that something more compact like a Model 3 would take a corner better than a lumbering Model X.

Once again, if you have lots of kids and want to burn some rubber, your choice might be limited to the Model X Performance. If you can wait a year, you can go with the Performance Model Y 7-seater or opt for the absolutely bonkers Plaid Model S which will feature Tesla’s new tri-motor setup and will be the most powerful Tesla made to date. But you probably shouldn’t be drag racing your car with your kids in the backseat.

If you’re only interested in racing, then the Model S should be your choice since it has the quickest acceleration of the bunch. With Tesla’s new launch control update incorporating a “Cheetah Stance,” your Model S will be ready to pounce on essentially anything (short of a Porsche 918 or Dodge Demon). Who knows, the upcoming Plaid model might even beat those.

For those who actually plan to take their Tesla onto the track, or maybe just want the Tesla that takes corners the best, the Performance Model 3 is an awesome option. It’s the only Tesla model that comes with a Track Mode, which focuses on providing optimum performance in a track scenario (such as increased regenerative braking and increased cornering power). A recent update to the system also allows you to use the Autopilot cameras to record your lap, along with analytic data showing your speed and g-forces. Keep in mind, the Model 3’s small sedan body lends itself well to better handling versus the other models Tesla offers — at least until the Roadster comes out.