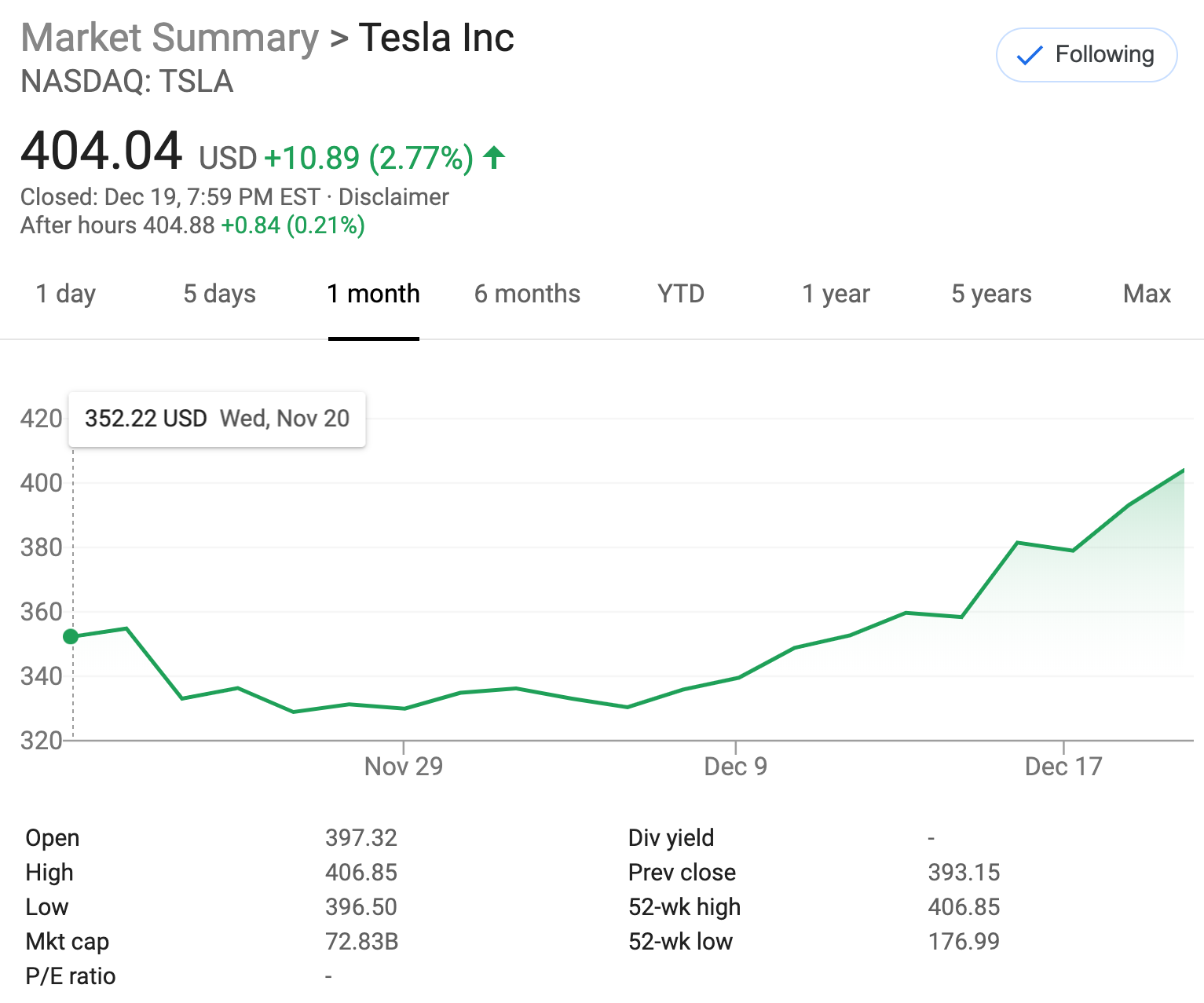 The headline isn’t exactly true, but if you are reading the various daily analyses of the stock this week, that’s sure what it seems analysts are saying. Analysis is coming so quickly and voluminously as the stock continues to increase — over 10% as I write this — that even though I’ve been doing research each night, by the time I’m halfway ready to publish an article, the news has changed and the stock is rising even more.

I’m going to take this moment to touch on what I think this isn’t, what it might be, and what I think it is. Feel free to add your comments below and I’ll try to address them in future articles.

What I Think It’s Not

After Monday’s increase, when the stock closed at $381.50 (from $358.39), pundits stated that it was largely because the US Congress was going to pass a budget that included an increase in the electric car tax credit to $7,000 for up to 600,000 vehicles sold. In short, I’m not a huge fan of how these tax plans are structured, as they really benefit smaller automakers and those that sit on the sidelines more than those that invest in the transition, but it’s been quite clearly shown that Tesla is ahead enough that the tax credit would be a much larger benefit to a company like GM, which has used its up but has nothing very compelling for nearly the same price as Tesla.

But, the tax credit was dead almost as soon as it was introduced, and yet it seemed that the market agreed with me that the tax credit really wasn’t something that was news.

Yesterday, according to many analysts I’m apparently supposed to believe that the government’s decision to extend tax credits for installing home EV chargers is why the price for a share of Tesla rose to $393.15. This is incredibly stupid.

Maybe Helping, But We Knew This

Some analysts have claimed that the Chinese Gigafactory is starting to produce vehicles faster than expected. Maybe it’s this, but it was October 23rd that Musk stated on an earnings call that Tesla had already completed test production, so I find that dubious.

A different report stated that a bear went to Tesla and came away impressed with the company’s battery technology, even though that bear reiterated a $200 share price value. I think this has something to do with it, but if you’ve been watching most of the “non-mainstream” Tesla analysts, and I’ll even toot my own horn here, we’ve been stating for a long time that Tesla is way ahead on batteries and that will enable everything else.

(A note here, if you follow Tesla from a financial standpoint, I think you should read my article “Tesla Coverage: High Speed, Low Quality” from last year that discusses how it’s extremely hard to properly cover a company like Tesla that is moving on so many fronts at once without that being your full-time job, and my follow up, “Regarding Tesla: Let’s All Calm Down,” explains the value of much of the “non-mainstream” coverage. I am proud to say at least for the moment that we “non-mainstream” people seem to be getting this right.)

What I Think It Is

The amount of content I’ve written on Tesla has helped to make me realize what I think is going on here.  When I started covering Tesla for CleanTechnica, I owned a total of 4 shares of the stock and I intended to write some articles about aspects of the bear thesis that were valid. I did one such article in June, which stated my concerns — my largest being that Tesla is so ambitious it might make decisions that could still cripple the company.

This October, I wrote shortly before the earnings call that “I was wrong.” In that article, I noted 11 things that I saw driving Tesla’s future in an extremely positive way, and that I had come to terms with myself that my concern was overblown.

So, what does the history of Frugal Moogal articles have to do with why the stock price is moving higher right now? Well, it doesn’t, but I realized that during my own personal journey to study the stock, the company — in less than two years — had managed to address all of my concerns, is ahead on production, faces essentially no competition, and has a clear path to not just profitability, but sales of over one million cars a year by 2021.

And, no one is close.

The Porsche Taycan’s battery is 9.8% larger than the 2012 Model S’s 85 kWh battery pack. Yet, in 2012, the Model S got 31.8% more range than the 2020 Porsche Taycan does. Combining these numbers, Tesla’s seven year old technology is more than 44% more efficient than Porsche’s technology today.

And, Tesla seems poised to make a huge battery announcement in coming months.

I feel like this is worth highlighting even further. The Porsche Taycan gets about 2.15 miles (3.46 km) per kWh. To match the top-of-the-line Model S currently, assuming that figure doesn’t change, the Porsche Taycan would need a 172 kWh battery pack. Even if we assume $100 per kWh at the pack level for Porsche, this would be a difference in cost of nearly $8,000 in battery alone.

I can see the comments section now, as there were a bunch of excuses for the poor performance of the Taycan by various people. Here’s my bullet point responses to you in advance:

So, anyway, enough of me piling on the Taycan’s range.

Let’s pull all of this together now.

I think that Tesla has been going up for three reasons. The first is a supposed “Tesla Killer,” the Porsche Taycan, not living up to the Model S from seven years beforehand.

The second is almost immediately after that, a “mainstream” analyst stated they feel the battery optimism is legit.

Once the stock started going up, it started to cause shorts to cover, and now we’re in a cycle where the shorts keep getting squeezed to new heights. Short interest is still high. However, the number of shares shorted are almost half of what they were six months ago.

At the same time, those of us who have been optimistic seem to be having our belief validated regularly. Although I have no way to show this, it seems that more investors are planning to hold their shares for the foreseeable future, and have added to their positions in the last six months. I have.

I can’t say the stock will never dip again. After all, it’s traditionally an extremely volatile stock.

Heck, I hope it does. I’d love to add more shares.

Appreciate CleanTechnica’s originality and cleantech news coverage? Consider becoming a CleanTechnica Member, Supporter, Technician, or Ambassador — or a patron on Patreon. Don't want to miss a cleantech story? Sign up for daily news updates from CleanTechnica on email. Or follow us on Google News! Have a tip for CleanTechnica, want to advertise, or want to suggest a guest for our CleanTech Talk podcast? Contact us here.
In this article:Porsche, Porsche Taycan, Tesla, Tesla Model S, Tesla stock