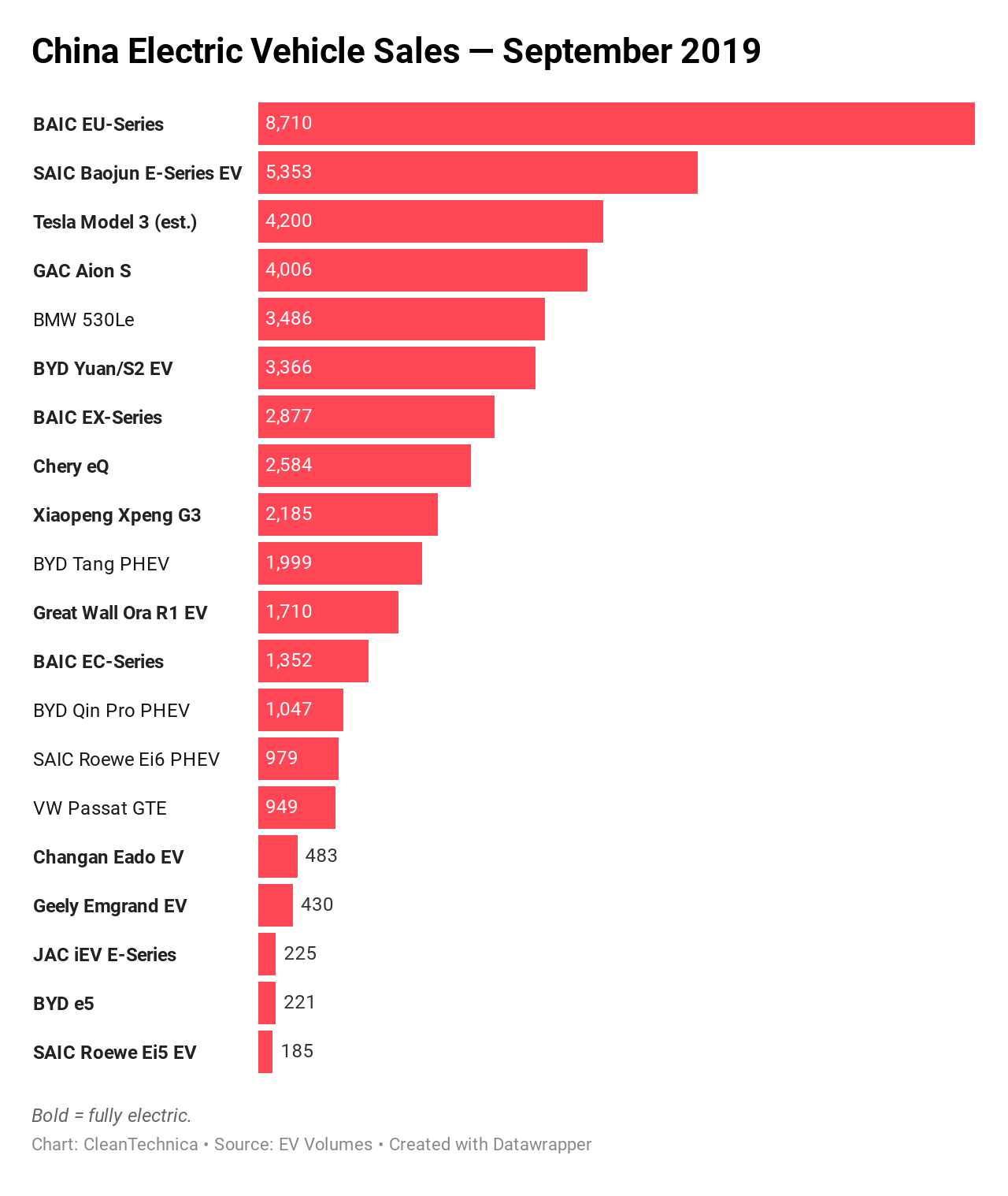 There seem to be no end to the end-of-incentives hangover in China, with the Chinese plug-in market dropping a steep 27% year over year (YoY), and plug-in hybrids (PHEVs) crashing 45% YoY last month. Additionally, BEVs finally got dragged into the red ink, dropping a harsh 20% in September. The overall auto market was not so catastrophic, sliding down just 6% YoY.

In the midst of this adverse environment, September’s plug-in vehicle (PEV) share was just 4%, dropping the 2019 PEV market share to 5.7% (4.4% for BEVs alone), which is still above the 2018 result (4.2%), but should the market continue in the red until the end of the year, the 2019 growth rate will be minimal, compared to the exponential growth rates of previous years.

The reason for this string of drops lies in the subsidy changes that happened on June 26, when new energy vehicle (NEV) subsidies were cut off completely for vehicles with less than 250 km of electric range and those with higher range saw their subsidies halved.

From then on, we are witnessing a less subsidy-fueled market, with smaller, cheaper models unable to compensate the subsidy loss while the most expensive end of the market continues to thrive, helping foreign OEMs to increase their market share, now at 13%.

Currently, China is the fastest evolving plug-in market on the planet, with several new models outselling the year-to-date (YTD) best sellers, like the just landed BYD e2 (2,078 units), the badge-engineered JAC E20X crossover (2,236 units) from SOL, the new EV-only brand from Volkswagen, or the NIO ES6 (1,726).

In September, the nameplates that made an impression were the #3 Tesla Model 3, the #4 GAC Aion S, and the #5 BMW 530Le, three different proposals that should start to become regular faces in future top 5 rankings.

#1 – BAIC EU-Series: This electric sedan scored 8,710 units last month, with the Beijing Auto sedan recovering the monthly Best Seller title while improving 15% month-on-month. The design and specs (215 hp, 416 km / 260 mi NEDC, $32,500) allow it to remain a popular choice, but with the competition increasing every passing month, BAIC has a tough job ahead of itself if it wants to keep leading the pack.

#2 – Baojun E-Series: With the end of subsidies for many small city EVs unable to reach the minimum 250 km range, the few that still have access to subsidies have seen their sales rise, and none more spectacularly than the Baojun E-Series, a Shanghai Auto and General Motors offspring. The last months of the tiny two-seater have been its best yet, having registered 5,353 units last month. The updated range, thanks to a new 24 kWh battery, is a crucial tool to reach the minimum-range subsidy requirement. Added to its competitive price (CNY 93,900 / $14,700) before subsidies, that makes it an appealing model, especially considering its modern design and features.

#3 – Tesla Model 3: The poster child for electric mobility hasn’t taken over this market by storm (yet), like it did elsewhere. Still, the Tesla sedan is making its own disruptive path, with the estimated 4,200 units of September allowing it to reach a podium position. At this point, the Tesla nameplate is far from the domination held in North America or Europe, but with local production set to be a few weeks away, the sporty silhouette of the Model 3 should become a common sighting in this top 5 ranking soon.

#4 – GAC Aion S: A few months ago, I mentioned the big potential of this model, saying it could reach a 10,000 unit/month pace. And things are going well for the Aion S, because the sleek sedan is now at 4,006 units on its 5th month in the market, reaching the 4th place in September, its 3rd top 5 spot in a row. Another sedan inspired by the Tesla Model 3 formula, GAC has high hopes for its new dedicated EV lineup, the Aion. Right now we have the sedan Aion S, but a midsize SUV, the LX, will soon follow. Regarding the Aion S, beyond the stylish (and aerodynamic — 0.245 cd) looks, this new model bears some impressive specs: a 59 kWh NCM 811 battery from CATL, 510 km (318 mi) NEDC range, and Level 2 autonomous driving aids. The real killer is the price: around 180,000 CNY ($26,000). Before subsidies. Like Kanye West would say: “Now, I ain’t sayin’ it’s a Tesla killa / But the Aion is messin’ with the best sellas…”

#5 – BMW 530Le: The rise and rise of BMW’s luxury sedan in China demonstrates two intersecting trends — first, the never-ending increase in demand for environmentally friendly vehicles in China, and second, the need to fulfill the plug-in quotas. Add the two together and you have 3,486 units, a new record result, even without access to subsidies (then again, let’s face it, subsidies for cars at this price level don’t really make that much of a difference — the owners just use the money for some nicer alloys or optional creature comforts). So, the leader in the luxury category should continue selling at over 3,000 units per month, which is well above its direct competitors, which are happy to reach 1,000 units in one month. The market is now adapting to the new reality that certain models lost access to subsidies. We’ll start with the most important position changes, the #4 BYD Tang PHEV and the #5 Chery eQ each climbing one position, at the expense of the BYD e5, which has seen its sales almost completely dry up (221 units).

The BYD workhorse sedan is now between a rock (subsidy cut) and a hard place (internal competition with the new BYD e2), so the carmaker needs to do something if it wants to revive its bread and butter model.

Elsewhere, both the BMW 530Le and the Tesla Model 3 benefitted from strong deliveries last month to jump several spots in the ranking, with the German sedan reaching #10, while the Californian was up to #11.

Oh, and with both nameplates separated by just 265 units, we should see a pretty interesting race for this year title of best foreign model. Stay tuned…

Another model profiting from the sales drought of many nameplates was the BAIC EX-Series, which climbed to #13, while its small sibling, the EC-Series, hung onto #18.

One big event was the GAC Aion S reaching the top 20, jumping into #19, thanks to 4,006 units registered, its 4th consecutive personal best in only 5 months on the market. With 3 months still to go, it wouldn’t be surprising if it still had time for a top 10 spot in 2019. As for next year, it will be a strong contender for a top 5 position.

Elsewhere, the SOL E20X seems to have started its regular deliveries, with 2,236 units registered, while SAIC’s MG eZS crossover registered 1,800 units, a positive month for a model with high ambitions in export markets.

In the Best-Selling Startup race, Xiaopeng (2,185 units) won the September battle, by a little more than 100 units (Nio delivered 1,726 ES6 + 293 ES8), but expect this particular race to continue to be tight until the end of the year, with both competitors running neck and neck for #1 and Weltmeister (1,518 units last month) on the lookout to rise above #3.

A mention is also due to the estimated 1,400 units of the Tesla Model X, the best-selling luxury SUV last month, but with the Californian nameplate still more than 1,000 units behind the NIO ES8 in the 2019 count, the Tesla nameplate will have to post a strong Q4 to remove the NIO flagship model from this year’s category leadership.

Off the podium, Geely (6%) is hanging on, watching the medal positions from a far, while at the same time gaining space over smaller players (Chery, Great Wall, JAC…) behind it.

Will natural selection help the market become more competitive? For now, the best foreign carmakers are already surpassing several local OEMs (Tesla, BMW, and VW each have 3%), with these frontrunners winning crucial breathing space in this highly competitive market.

On the other hand, it seems in the future only some 5 or 6 Chinese EV makers will be able to run with the best of the foreign brands…

Any bets on who they will be?

Cool New Kid on the Block

This month there’s one new model with top 20 potential:

BYD e2 — Between the small city EV (e1) category and the compact sedan (e5), there was a big gulf that BYD has now tried to fit with the e2, which is basically BYD’s take on the electric VW Golf. While the current design of BYD translates well in a compact hatchback body with some crossover DNA (because #crossoversarehot), the specs, usually a strong point in any model of the brand, are a bit so-so, with an electric motor of only 94 hp and just 300 km NEDC range. The model does compensate for this with a competitive price (+/-$15,000).

This is a strange move by BYD, after years establishing itself as the Chinese “performance brand,” the e1 and e2 show a rational side to BYD and I wonder if it will be understood by the company’s target audience. Anyway, this thing should find its place in the BYD stable. Although, it could be at the cost of its larger sibling, the e5 sedan.

If you prefer to see the sales charts with “Others” included, here are those charts: