After an end-of-incentives derived surge in June, July saw the expected hangover, with the Chinese plug-in vehicle market dropping 7% year over year (YoY), and the 70,000 units of last month representing less than half of the deliveries of the previous month. Plug-in hybrids (PHEVs) sank 22% YoY in July, their worst drop in over two years, while, amazingly, fully electric vehicles (BEVs) still managed to grow, if only by 1%, despite the gloom all around them (the overall market also dropped 4%). The reason for this drop lies in the subsidy changes that happened on June 26, when “new energy vehicle” (NEV) subsidies were cut off completely for vehicles with less than 250 km of electric range and those with higher range saw their subsidies halved, which made some models peak in June.

From now on, we should see a less subsidy-dependent market, with several models unable to compensate for the subsidy loss while others continue thriving, as we are starting to see this month.

This is just another reason why China is the most fascinating and fast evolving plug-in market on Earth. Summarizing some of the big factors, several changes are happening at the same time: foreign OEMs are trying to get a piece of the NEV cake (i.e., avoid fines imposed by the new quota system), local automakers are scaling up production with a never-ending slew of ever more competitive models, and there’s a race for survival of the several EV startups on the market.

As expected, this month was filled with surprises, with several models seeing their sales dry up while others continued their careers as if nothing had happened.

In July, the most important surprise in the model ranking came in #3, with the SAIC–GM offspring Baojun E-Series scoring an amazing 6,328 units, while the #4 GAC Aion S and #5 BMW 530Le also shined.

#1 — BAIC EU-Series: The electric sedan scored 8,937 sales last month. Deliveries dropped by half compared to June, but the good thing is that orders kept coming in, and things should only improve from now on. This confirmed that the brand’s bet for 2019 was right. The design and specs (215 hp, 416 km / 260 mi NEDC, $32,500) allows the model to remain a popular choice. But with the competition tightening every passing month, BAIC will have a tough job ahead of it if it wants to keep leading the pack.

#2 – BYD Yuan / S2 EV: To counterbalance the subsidy cut, BYD launched a basic version of the Yuan EV, called the S2, with a less powerful electric motor (only 70 kW / 93 hp) and a smaller battery (41 kWh), allowing it to keep its 6,000-something monthly results rolling. With the brand prioritizing BEVs, battery demand is increasing faster than before, so higher priced models (Tang, Song, Qin, etc.) have the priority over the Yuan, making it hard for the crossover to surpass the 6,400 units it delivered in July. The Yuan EV has unrivaled specs given its price (58 kWh battery, 410 km / 255 mi NEDC range, 163 hp motor, $25,000), while the S2 version, some $2,000 cheaper, will appeal to the more cash-strapped customers.

#3 – Baojun E-Series: Shanghai Auto and General Motors had high hopes for their tiny two-seater, and despite an irregular career, the latest evolution of the tiny two-seater, the E200, which has been recently updated with a 250 km NEDC range version, reached the podium for the first time since January, having registered 6,328 units last month. The updated range, thanks to a new 24 kWh battery, is a crucial tool to reach the subsidy’s minimum range requirement. That added to its competitive price ($14,700) before subsidies, making it an appealing model for many, especially considering its modern design and features — and the fact that most of its competitors lost access to subsidies. Maybe GM could consider exporting it?

#4 – GAC Aion S: Just a couple of months ago I was mentioning the big potential of this recently landed model, saying it could reach a pace of 10,000 units/month this year. And it sure looks like it will, because in only its third month on the market, the sleek sedan is already at 3,406 units, reaching the 4th place in July. Another sedan inspired by the Tesla Model 3 formula, GAC has high hopes for its new dedicated EV lineup, the Aion. Right now we have the sedan Aion S, but a midsize SUV, the LX, will soon follow. The Aion S, beyond the stylish looks (which also help its aerodynamics — 0.245 cd), bears some impressive specs: a 59 kWh CATL NCM 811 battery, 510 km / 318 mi NEDC range, and Level 2 driving aids. But the real killer is the price: around 180,000 CNY ($26,000), before subsidies. Like Kanye West would say: “Now, I ain’t sayin’ it’s a Tesla killer / But the Aion is messin’ with the Best Sellers…”

#5 – BMW 530Le: The rise of BMW’s luxury sedan in China demonstrates two intersecting trends, first the never-ending increase in demand for environmentally friendly vehicles in China, and second the need to fulfill the plug-in quotas. Add the two together and you have 2,752 registrations in July, even without access to subsidies (then again, let’s face it, subsidies for cars at this price level don’t really make that much of a difference — the owners just use the money for some nicer alloys or optional creature comforts). So, the leader in the luxury category should keep selling some 2,500 units per month, which is well above its direct competitors, which are happy to reach 1,000 units in one month.

The market is dynamic as ever, with plenty to talk about. This time the main reason for changes was subsidy-derived deliveries drying up for some models, some of them being completely unexpected. We’ll start with the most important position change, the BYD Tang PHEV displacing its sibling, the BYD e5, on the podium. The sedan model saw its deliveries almost disappear with the subsidy cut. This was one of the most surprising slumps, but considering the e5’s sales are directed towards price-sensitive customers, like taxi fleets, one can understand it.

The question now is, what will BYD do about it? Let’s not forget, the e5 is the workhorse that supports the brand, so that the fancier Dynasty models (Tang, Song, Qin, and Yuan) can shine.

On the other hand, the most surprising good result came from the Baojun E-Series, which jumped three positions, to #7, profiting from the fact that it is one of the few (the only?) small two-seat city EV that fulfills the minimum range requirements (250 km NEDC) to keep subsidies coming in.

Because there is a steady demand in big cities for this kind of vehicle, not only from private buyers, but also from carsharing companies, expect the E-Series to continue thriving, at least until the competitors launch updated versions of their own city EVs.

In the second half of the table, BAIC is on the up, with the small EC-Series climbing one position, to #18, while the EX-Series crossover shows up for the first time this year, in #20, making it three Beijing Auto models in the Top 20, a first this year.

Indifferent to the subsidy cut, the BMW 530Le jumped to #14, and has the Tesla Model 3 just 449 units away, so the German model could still climb further in the next couple of months.

The race for the best-selling foreign nameplate seems to be warming up now, as the current leader, the VW Passat PHEV, lost speed and should be pressured soon by both the Tesla Model 3 and BMW 530Le, in what could be an interesting race to follow.

The Xpeng G3 EV, from EV startup Xiaopeng, slowed slightly, landing 1,515 deliveries last month, but it was still better than WM Motors (1,093 units) and Nio (1,502). Although, this last one saw the recent ES6 reach 1,066 units in July, so expect Nio to recover the Best Selling Startup title soon, thanks to the ES6 production ramp up.

Talking about production ramp ups, the much hyped GAC Aion S sedan is growing fast, having reached 3,406 units last month. That puts to shame the arch rival Geely Geometry A, which scored only 1,076 units, dropping 37% compared to the previous month. Although the GAC sedan is still 3,000 units below the top 20, if the model continues to grow deliveries at this pace, it shouldn’t take long for it to show up in the ranking.

How high will the GAC sedan go? Top 10? It all depends on the speed of the production ramp up, but one thing is certain: the Aion S looks to be a strong contender for a top 5 spot in 2020.

Looking at the manufacturer ranking, BYD (23%, up 1%) is leading comfortably, thanks to the collective success of its lineup, while below it, BAIC (10%) and SAIC (8%) remain in the remaining medal spots.

Off the podium, Geely (6%) increased the distance to other, smaller players (Chery, JAC …), while it prepares to go after a medal position in the coming months.

This month saw quite a lot of new models landing, with GAC starting its 4th badge-engineering deal, this time with Fiat-Chrysler (GAC’s other customers are Mitsubishi, Toyota, and Honda). The result was the launch of the Yuejie PHEV crossover. Kia launched a PHEV version of its K3 compact sedan as well, and Dongfeng launched its version of the Nissan Sylphy EV, called the Venucia D60 EV.

Nothing to get really excited about, right? At least the following landing comes into a segment that is neither a compact sedan or crossover:

SAIC Maxus EG50 – The MPV/van arm of Shanghai Auto, Maxus, is starting to be known in Europe, thanks to its EV80 commercial van (think Chinese Ford Transit), but its only electric option in the MPV side of the business, the Chrysler Pacifica-sized EG10 full-size MPV, hasn’t really taken off, with monthly sales in the low two-digit area. So, SAIC now launched the midsize EG50 (think Ford Galaxy / VW Sharan), which is nothing less than an EV conversion of its G50 ICE model. While power is not abundant (for that checkbox, go to BYD’s website and check the Song Max MPV), with only 116 hp, the 53 kWh battery allows for a not too shabby 350 km NEDC range, making it an interesting proposition considering the price ($29,000).

The 18 units of the landing month look insignificant, given the size of the Chinese plug-in market, but I guess SAIC would be happy if this model reaches some 500 units/month at cruising speed. Now, what many would like SAIC to do would be to launch a compact electric MPV (think Renault Scénic or VW Touran) with 7 seats and at least 300 km NEDC range, and especially for export markets as soon as possible, as it is a large and untapped market. No one is providing such a format (bar the van-with-windows Nissan Evalia EV), even in PHEV form. And such a compact MPV would complement perfectly the EV80 van in Europe. Just my 2 cents on the subject, SAIC! (wink, wink)

Here are the sales charts again but with a bar for “others” added in: 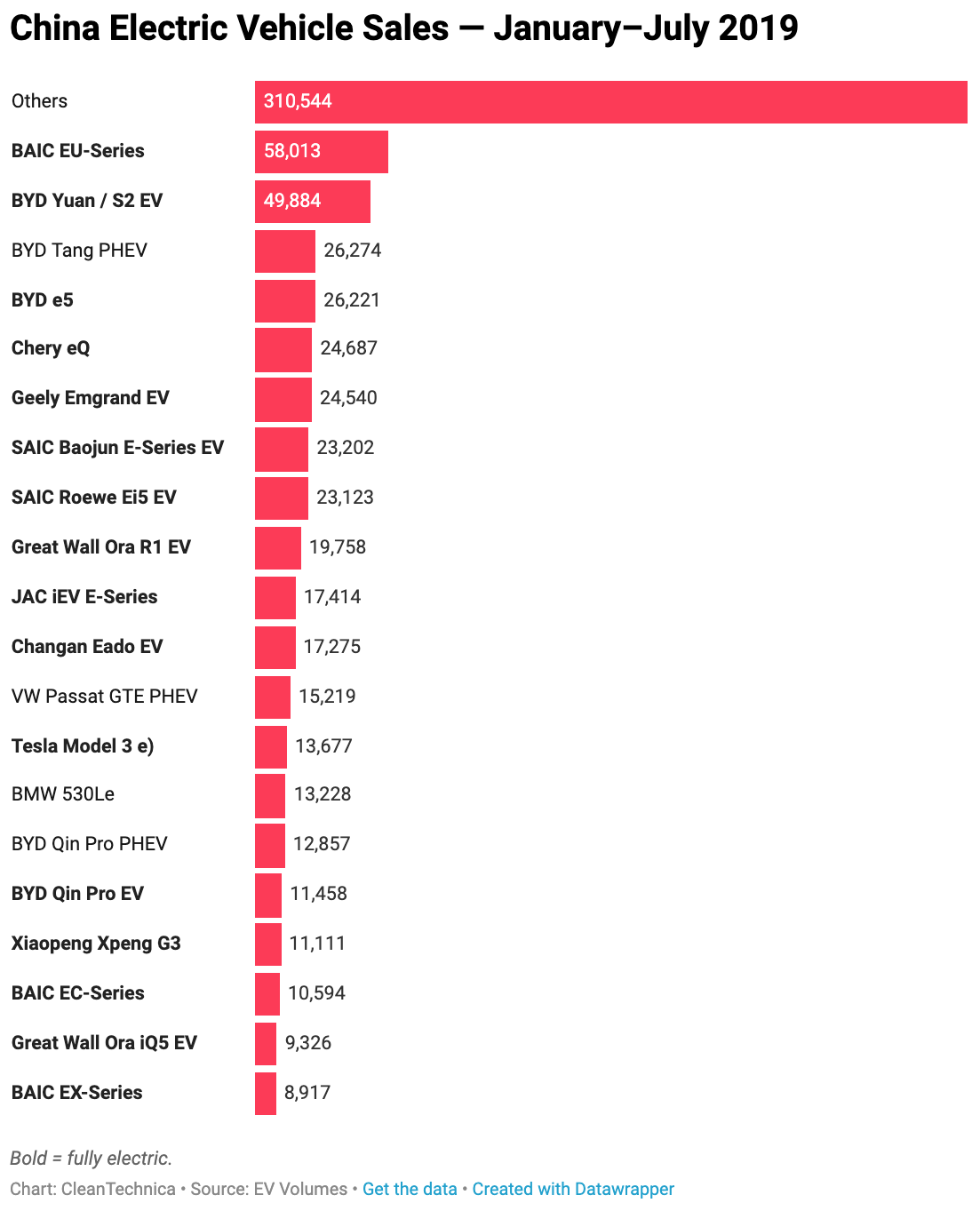