Those three words are rarely seen together, but Ford hopes to change that in the next few years. Ford just released photos and a video featuring a sneak peak at an all-electric prototype Ford F-150. The video, which can be viewed here or below, features Linda Zhang, chief engineer of the Ford F-150, demonstrating the capability of a prototype all-electric F-150 by towing 10 double-decker rail cars weighing more than 1 million pounds. A handful of current F-150 owners observe the iconic pickup truck pulling the train, seemingly in amazement that the feat is being done by an electric version of their favorite pickup.

In the video, Ford then loads 42 F-150s, which represent 42 years of the pickup being the #1 selling vehicle in the US, onto the train and the electric prototype pulls the train a second time, but now at a weight of more than 1.2 million pounds. 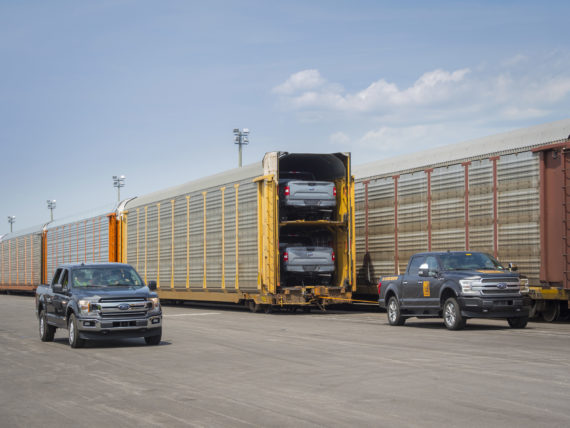 The video, accompanying photos of the prototype and a blog post on Medium, are clearly a message to the marketplace that Ford intends to continue its leadership in the truck category, including with fully electric pickups. Hedging its bet somewhat, Ford also confirmed that it will launch a hybrid version of the F-150 in 2020.

Ford did not share any specific details or specifications on the electric F-150 or a timeline on when it would start production or reach dealers. All we really know for now is that it will apparently look like a regular F-150, it will be a towing monster, and it should reach the market in “the next few years.” My assumption is that “the next few years” likely means from 2 to 4 years. If we split the difference, the BEV pickup may reach Ford dealers in 2022 or 2023. Electric vehicles are viewed by early adopters, especially on the coasts, as being hip, state of the art, the future, high tech, green, fast, low maintenance, fun, convenient (with home charging or easy destination charging), and more. But a hurdle to mass adoption in the US is that a lot of Americans in the middle of the country view EVs as either toys for the rich or wimpy green mobiles that can’t match the capabilities of their gas- or diesel-powered cars, SUVs, and especially trucks. And this is compounded by the fact that not a single electric pickup is currently available for sale in the US.

Let’s be honest — while there are several factors and reasons the EV sales share is around 10% in California, they are at the same time less than 1% in about two dozen states, and the image of EVs and lack of an electric pickup cannot be discounted in explaining that. And this is where Ford could play a key role in the path to mass EV adoption in the US.

With the Model S, Tesla made electric vehicles sexy and aspirational. People wanted a Tesla not just because the cars were electric, but because they were fast, attractive, high tech, and often made you the envy of your neighbors.

What is exciting about what Ford is planning based on these early teaser efforts is that the company wants to add another attribute for electric vehicles, that being “tough.” While the towing capabilities of the F-150 electric prototype are hard to ignore, for me, how Ford is positioning the truck to its current customer base is even more impressive. While just a prototype, and it is unclear if the styling will change, it appears that Ford will stick with the standard and current look of the F-150 for the fully electric version. Ford seems to be saying to its market and customer base: “Hey, it is the same F-150 you’ve loved for years — this one just happens to have an electric motor instead of a gas engine. And oh, BTW, this one has more torque and towing power than the one you currently drive.”

If you watch TV commercials for pickups, you will notice they tend to stress power, torque, towing capacity, and overall toughness. Ford in fact has been using the tagline “Built Ford Tough” for 41 years. And Ram trucks, which recently passed Chevrolet for the #2 sales slot for pickups, has definitely benefited from its own macho, tough-truck image. Will An Electric F-150 Be An EV Game Changer In The US?

The Ford F-150 pickup has been the #1 selling light vehicle in the US for 42 years, and this trend continues so far in 2019. The Ram Pickup and Chevrolet Silverado pickup rank #2 and #3. America, as is well known, loves its trucks. Top 10 Selling Vehicles in the US Jan-June 2019 | Image: Screenshot from GoodCarBadCar.net

According to an article in The Conversation, the F-150 is now in its 13th generation and has been through more frequent upgrades and redesigns than its competitors. In 2014, for example, Ford invested $3 billion to replace the truck’s steel body with an aluminum one, dropping the truck’s average weight by approximately 700 pounds.

Rather than a radical reinvention, the prototype design and positioning in the video suggests that Ford knows best how to keep its F-Series franchise going, through continuous innovation. The challenge for Ford will be convincing the traditional buyer of pickups that an electric truck is also a tough and super powerful truck. This could be a risky, albeit necessary, move for Ford, as for a few years after launch some buyers could migrate to the Ram pickup. But pulling trains weighing more than 1 million pounds is a good start to convince buyers that an electric F-150 is as tough as they come. I can’t wait to see Ford’s ads in a few years when the electric F-150 actually reaches the market.

While others may disagree with me, for the next few years I expect only the Tesla Model 3 and Y, perhaps the VW I.D. CROZZ, and maybe Ford’s own Escape PHEV to sell at any significant volumes in the US. And after launch I expect the Rivian RT1 and Tesla Model P pickups to sell well, but due to their cost and/or styling and limited production volume capabilities, they may reach a sales volume of perhaps 2,000 units per month. By comparison, the F-150 sold nearly 90,000 units in June 2019.

For electric vehicles to “cross the chasm” and achieve mainstream consumer adoption in the US, we need a lot more models (of all types), longer range, prices comparable to gas models, and ubiquitous charging infrastructure. (And automakers need to be sure to secure enough batteries to produce and sell a high number of EVs.) But as critical as all of those factors are, perhaps what is needed most is for electric vehicles to viewed as “normal.” And an all-electric Ford F-150 may get us there.

In 2030, when observers look back on the previous 20 year history of EVs in the US, the electric Ford F-150 may viewed as a key vehicle that ushered in mass adoption of EVs. Key, of course, will be the truck’s price, range, and availability.

Regarding charging, as I reported recently, Ford plans to partner with Electrify America for customer access to its charging network. A Ford spokesperson assured me that many more announcements would be forthcoming around creating a great charging experience for Ford EV owners.

While the electric F-150 revealed today was just a prototype and no details or timeline were shared, it is becoming clear that Ford is getting serious about a future of electric vehicle models. Stay tuned.