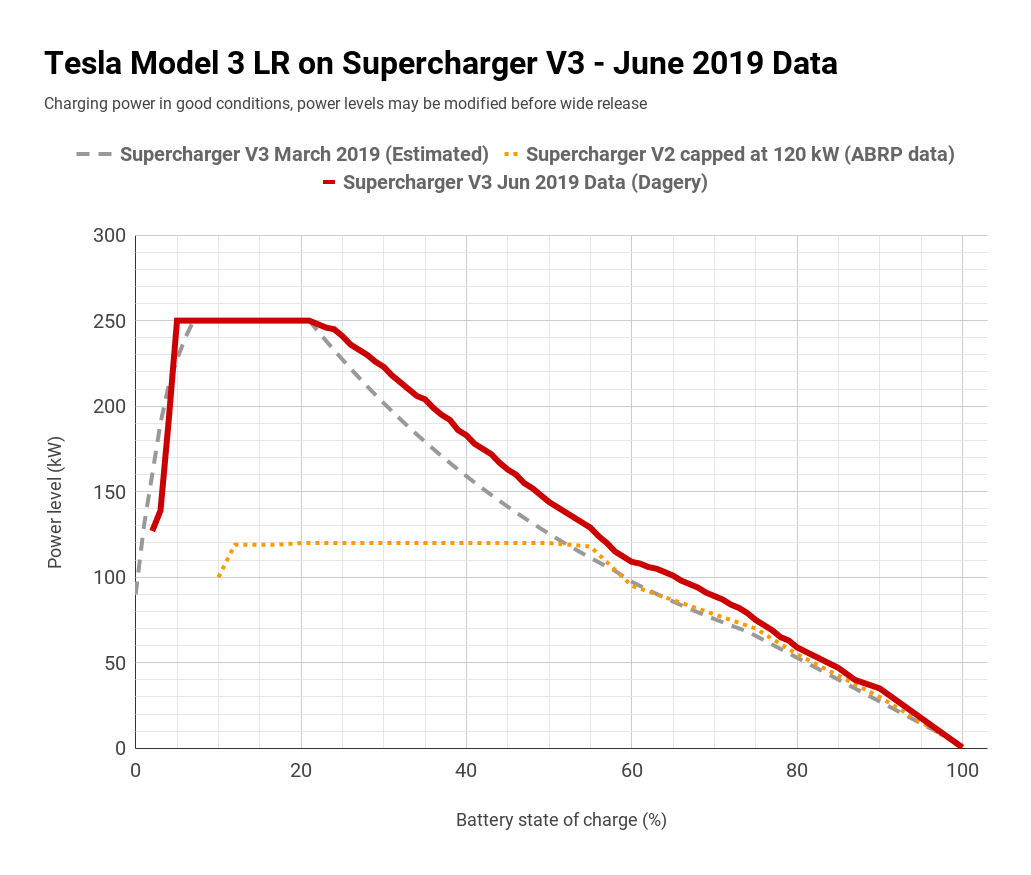 We have new data about the performance of Tesla’s new Supercharger version 3 (V3) when charging a Tesla Model 3 Long Range. It’s even faster than we thought! YouTuber Dagery recorded a charging session, showing the Tesla recovering 50% of the battery capacity in under 12 minutes. Dagery’s Tesla Model 3 Long Range was using firmware 2019.20.2.1. The vehicle had just driven 100 highway miles (161 km), and the battery was in a warm condition, in order to replicate a typical highway Supercharging session. There’s no information about whether battery preconditioning was also activated, but it seems likely that it was, since the owner was specifically planning to investigate and record the details of this charge session. You can watch Dragery’s video on YouTube, if you enjoy geeking out.

The vehicle was plugged in at a low 2% state of charge, quickly shot up to the full 250 kW power, and added 50% of capacity in 11 minutes and 29 seconds from the start of the charge session! Dragery went on to charge to 90% before closing out the session, giving us a wealth of new data on the Supercharger V3 charging curve.

A more typical charge session, plugging in at 10%, is almost as fast, adding 50% of range in about 12 and a half minutes.

Let’s look at Dragery’s charging session data mapped onto a power curve, and compare it to our previous best-guess modeling of the V3 charge curve:

It’s evidently even faster that I had previously modeled, with the taper coming in a bit more gradually than geeks like me were expecting. Interestingly, the high-power CCS charge session that Bjorn recently recorded has almost exactly the same curve shape, except for the lower peak power (191 kW instead of 250 kW). On the new Supercharger V3 curve, we can see that, after plugging in at 2% state of charge, the power ramped very fast, and the full 250 kW was reached by just 5%, and remained at full power until just before 22%.

Recovering that initial 20% of range (equivalent to 59 miles at highway speeds, or 65 miles at city speeds) at up to 250 kW (“1069 miles per hour”) took just 4 minutes and 24 seconds from a standing start! For comparison, that’s more highway range recovered than the Audi e-tron can manage in over 10 minutes of charging. Since we recently looked at Bjorn’s data from the Model 3 in Europe charging on high power CCS chargers, let’s compare some standard charging durations on CCS with those on Supercharger V3:

We can see that the Tesla Model 3 LR is certainly no slouch on 500 amp CCS chargers. But it’s around 15% faster still on the Supercharger V3. In terms of the charging capability of non-Tesla EVs, the runner-up, the Audi e-tron, is a very long way behind.

On Supercharger V3, the Tesla can recover 193 miles (311 km) of highway range in just 20 minutes (typically well over two and a half hours of highway driving). That’s about the duration between bathroom breaks for many folks, especially when there are kids on board. Three hours of onward highway range can be recovered in under 30 minutes.

At these power levels, we can see why Tesla anticipates that each Supercharger V3 stall will dramatically reduce the duration of average charging sessions, and thus serve more customers over a given time period compared to the previous V2 Supercharger. Folks who are within 100 miles of their destination will be able to recover all of the range they need in just around 8 minutes when plugging in on a V3 stall. Remember that every Supercharger V3 stall will have its own independent power supply — no sharing of power across paired stalls. Fast charging times are fairly guaranteed.

Let’s look at our standard road trip capability chart to see what’s now possible with the Model 3 LR on Supercharger V3 (find the metric chart at the end of the article): To me, it looks like the Model 3 paired with Supercharger V3 is crushing it. Able to cover almost 460 miles (or 740 km) with just a 20 minute break, the vehicle is usually going be waiting for its owners on road trips, and not the other way around. Please jump in to the comments and share your own thoughts.

Metric version of the graph: Appreciate CleanTechnica’s originality and cleantech news coverage? Consider becoming a CleanTechnica Member, Supporter, Technician, or Ambassador — or a patron on Patreon. Don't want to miss a cleantech story? Sign up for daily news updates from CleanTechnica on email. Or follow us on Google News! Have a tip for CleanTechnica, want to advertise, or want to suggest a guest for our CleanTech Talk podcast? Contact us here.
In this article:audi e-tron, Dagery, EV road trips, Tesla, Tesla Model 3 Long Range, Tesla road trips, tesla superchargers, Tesla Supercharging