Imagine Lagos, Nigeria, a city of 22 million. What was once a small coastal town just a few decades ago has exploded into a sprawling megacity spanning 452 square miles. Its rapid growth has stretched the city’s services impossibly thin: Less than 10 percent of people live in homes with sewer connections; less than 20 percent have access to tap water. Many houses are in slums and informal settlements at the city’s periphery. Now picture Lagos twice as big.

Originally published on WRI’s Resource Watch platform, a platform which features hundreds of data sets all in one place on the state of the planet’s resources and citizens, and WRI’s Insights blog.

By Jillian Du and Anjali Mahendra

Imagine Lagos, Nigeria, a city of 22 million. What was once a small coastal town just a few decades ago has exploded into a sprawling megacity spanning 452 square miles. Its rapid growth has stretched the city’s services impossibly thin: Less than 10 percent of people live in homes with sewer connections; less than 20 percent have access to tap water. Many houses are in slums and informal settlements at the city’s periphery.

Lagos is one of many cities expected to grow exponentially over the next three decades, in both population and land area. Recent estimates show that urban land area could increase 80 percent globally between 2018 and 2030, assuming constant annual growth rates. When cities spread outward instead of upward, as Lagos has, it can worsen spatial inequalities and strain economies and natural resources.

Lagos is expected to at least double its land area by 2050. Photo credit by Heinrich-Böll-Stiftung/Flickr

In our new World Resources Report paper, Upward and Outward Growth: Managing Urban Expansion for More Equitable Cities in the Global South, we analyzed growth patterns for 499 cities using remote sensing. While cities growing vertically through taller buildings are located predominantly in wealthier cities in North America, Europe and East Asia, cities in sub-Saharan Africa and South Asia are growing mainly outward. These cities have the fewest financial resources to manage their growth, but are expected to hold more than 2 billion additional people by 2050. As we know from the latest UN data, just three countries—India, China, and Nigeria—are expected to account for 35 percent of global urban population growth between 2018 and 2050. As these cities grow in population, continuing their unwieldy expansion outward could push them into crises.

Failure to properly manage expanding land area not only exacerbates urban inequality, it also contributes to greater economic and environmental risk for the city as a whole. From Mumbai to Mexico City, it is all-too-common to see crowded slums grow larger and denser next to unaffordable, often vacant, high-rise developments. As municipal service networks fail to keep pace with urban growth, resource-constrained cities tend to react to development trends instead of having land development agencies proactively plan for growth.

Some of the implications of this unmanaged growth include: 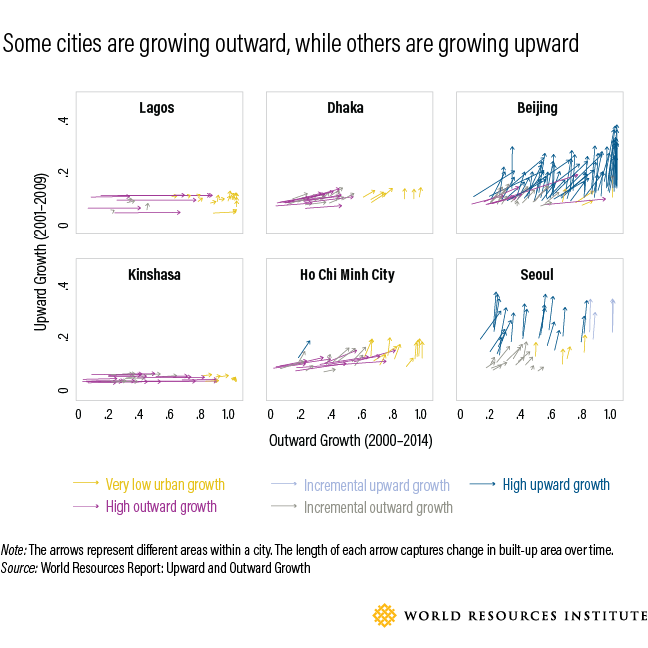 These impacts are compounded by the fact that most outward growth currently underway in Africa and South Asia is unplanned and informal, or in locations where existing urban land use regulations do not apply. Some of this expansion is outside of cities’ control, considering natural population increases and people migrating from rural to urban areas in search of economic opportunities. But other challenges are things cities can more proactively manage.

Though a daunting challenge, some cities are already using innovative approaches to prioritize accessibility and manage urban expansion. Cities in Mexico, Brazil and South Africa are directing new development to already well-serviced and connected areas, instead of spreading outwards. Cities in Colombia, South Korea and India have been incrementally adding new land in well-connected and serviced locations by partnering with public utilities and private companies to help with financing. Many cities are also working with communities in informal settlements to create affordable density with more flexible planning standards and upgrading efforts.

The impacts of land-use policy changes in a city can last for many decades. Cities in Africa and Asia have a choice: Start managing unsustainable outward expansion today, or see problems worsen tomorrow.

Explore data on city expansion and projected population growth on Resource Watch. And for an overview of cities data, check out the topic page.