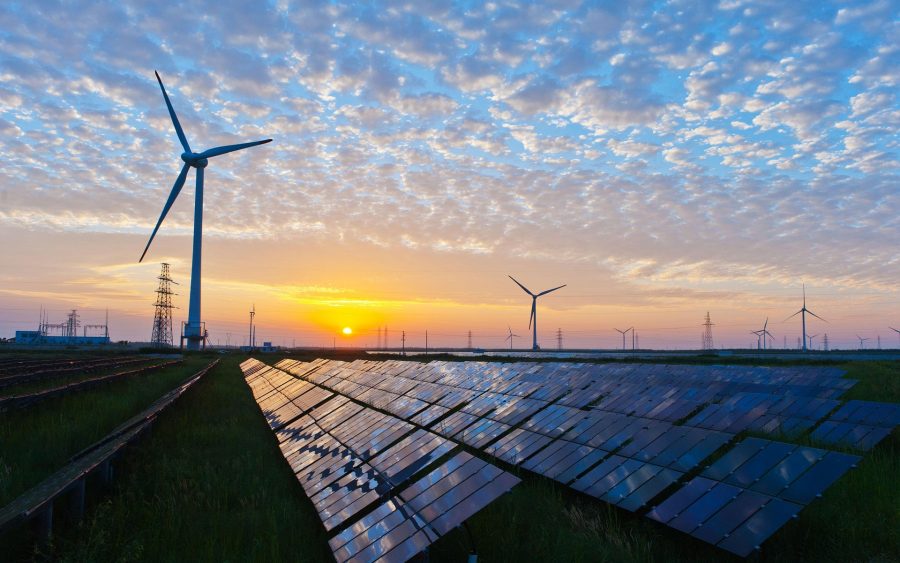 Researchers at the Lappeenranta-Lahti University of Technology (LUT) in Finland and Energy Watch Group (EWG) have completed a 4½ year study that examined how to meet the goals of the Paris climate accords without such measures as carbon capture and geoengineering. Their conclusion? Run everything on electricity and generate all of that electricity using renewables, primarily solar.

When the scientists say electrify everything, they mean that quite literally — all transportation, all building heating, all manufacturing, and all desalinization. A fantastical, theoretical goal? Not at all, the study says. “A global transition to 100% renewable energy across all sectors — power, heat, transport, and desalination before 2050 — is feasible.” In fact, the authors say it could be done quicker than that, according to RenewEconomy.

“Existing renewable energy potential and technologies, including storage, is capable of generating a secure energy supply at every hour throughout the year. The sustainable energy system is more efficient and cost-effective than the existing system, which is based primarily on fossil fuels and nuclear. A global renewable transition is the only sustainable option for the energy sector, and is compatible with the internationally adopted Paris Agreement.”

Dr Christian Breyer is a professor for solar economy at LUT. He led the team of 14 researchers during the 4½ years it took to complete the analysis. “The study’s results show that all countries can and should accelerate the current Paris Climate Agreement targets. A transition to 100% clean, renewable energies is highly realistic — even today, with the technologies currently available,” he says.

The full study is 300 pages long and can be accessed in full at this link. In a press release, Energy Watch Group highlights the key findings of the study:

“The report confirms that a transition to 100% renewables is possible across all sectors, and is no longer more expensive than the current energy system,” said Hans-Josef Fell, president of the Energy Watch Group. “It shows that the whole world can make the transition to a zero emission energy system. That is why all political powers around the world can and should do much more to protect our climate than they currently envision.”

The study predicts that meeting the goals set forth in the study report will increase the demand for electricity by a factor of 5 times compared to global demand in 2015. It says once everything is electrified, the world will need 150,000 terawatts of electricity every year. All of that will come from decentralized renewables such as solar (69%), wind (18%), hydro (3%), bioenergy (6%) and geothermal (2%). Consumption of fossil and nuclear energy resources in all sectors will cease completely by 2050.

The study projects 63,380 GW of solar power will be needed versus the 300 GW installed today. Total wind capacity will be 8,130 GW. Batteries will account for 92% of all electricity storage with pumped hydro — currently the leading source of energy storage — playing a greatly reduced role. [Note: Other researchers believe pumped hydro storage can play a much larger role going forward. ]

The transition in all sectors will reduce the annual greenhouse gas emissions in the energy sector continuously from roughly 30 gigatons in 2015 to zero by 2050 and will create 35 million new jobs worldwide, 15 million of them in the renewable energy sector. That will completely offset the loss of 9 million jobs in the coal industry.

The study suggests total losses from curtailment, storage, and distribution in a 100% renewable energy based electricity system will about 25% of total generation. That may seem like a lot until you realize that current generation that relies on fossil fuels has losses from primary energy to final electricity demand of 56%. That’s right. Less than half of all the electricity produced by burning fossil fuels every gets used productively, according to the LUT study.

Thanks to the modeling done by the researchers and the extensive database created over the past 4½ years, EWG and LUT can now also develop national road maps for the transition to 100% renewables that are tailored precisely to the needs of individual countries says Hans-Josef Fell. CleanTechnica readers will recall that similar detailed roadmaps have been created by professor Mark Jacobson and his research team at Stanford University.

So if these road maps exist, why are they not being implemented? “The energy transition is not a question of technical feasibility or economic viability, but one of political will,” says Christian Breyer. The political landscape is fraught with barriers to moving forward with the renewable energy revolution but social pressure is mounting.

Concerned citizens around the world are beginning to coalesce around the ideas put forth by Greta Thunberg and Alexandria Ocasio-Cortez. Protesters who are part of the Extinction Rebellion are making their voices heard. Employees at many major companies, including Amazon, are pushing for more aggressive climate policies. The ferment for change is growing.

But the reality is that this will happen if renewables are cheaper than fossil fuels. If not, we all be dead while a few wealthy plutocrats count their money in space while on a journey to another solar system. The LUT study finds that the total levelized cost of electricity will indeed decline if a switch to 100% renewables takes place.

Economics will make the final decision no matter how many gazillions of words are written about the virtues of renewable energy. The good news is the LUT study claims renewables will in fact be cheaper than making electricity from any other source, including nuclear power.

“The total levelized cost of electricity — including generation, storage, curtailment and some grid costs — is put at €53.6/MWh, with a range of €33 to €66/MWh for three-quarters of global power demand. (It will be higher in some areas with poor wind and solar conditions).” If that’s true, we may have a chance, albeit a slim one, of surviving the ravages of human greed.

Have a tip for CleanTechnica, want to advertise, or want to suggest a guest for our CleanTech Talk podcast? Contact us here.
In this article:Climate change, Energy Watch Group, lcoe, LUT, mark jacobson, Renewable Energy, Solar power