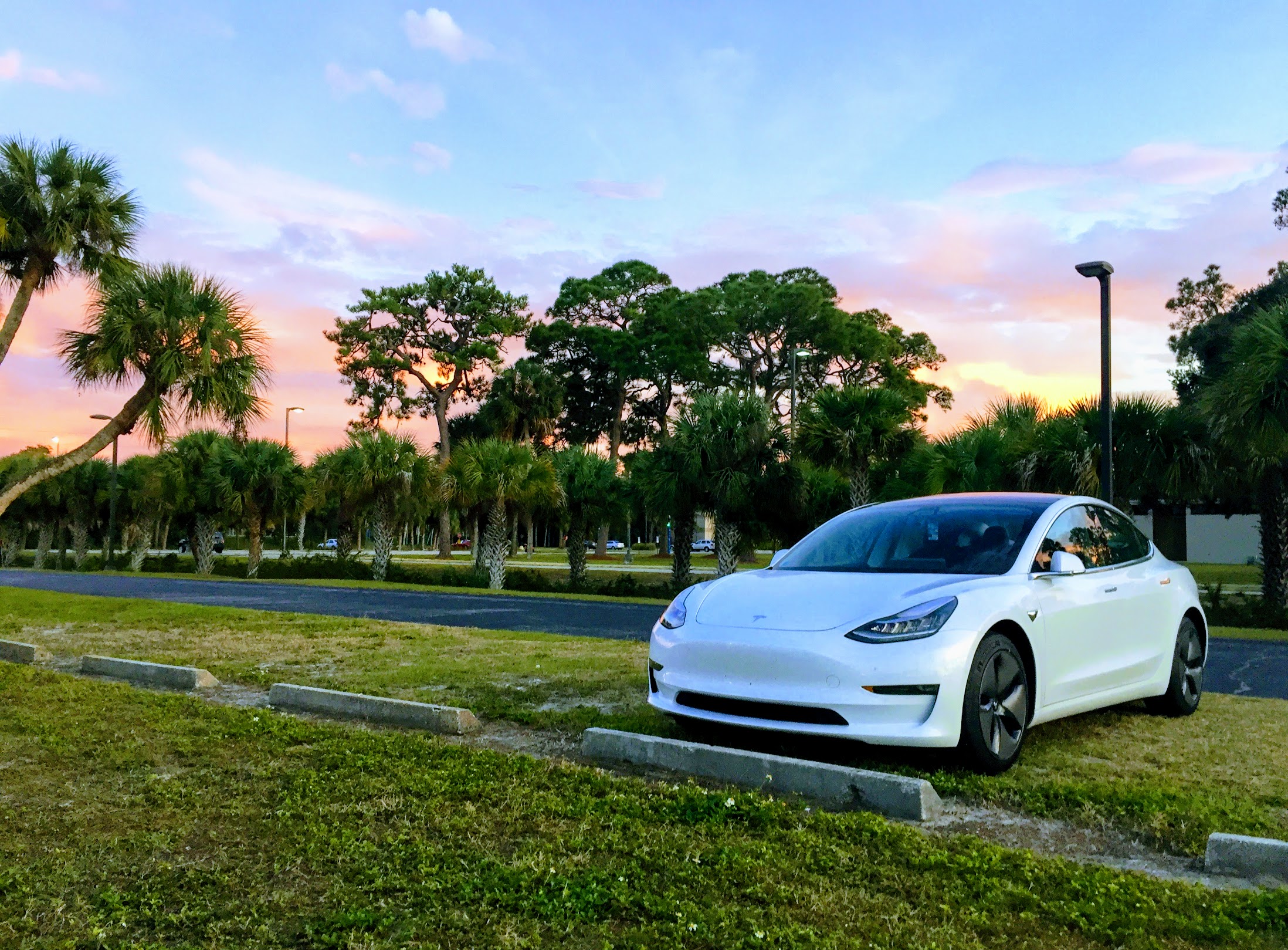 Some things cannot be explained by numbers. The Tesla Model 3’s drive quality is phenomenally better than the drive quality of nearly every other car on the market. That is not hyperbole. Race car drivers have said it, top auto journalists have said it, and hundreds of thousands of other people have said it. You just have to experience the Model 3 to understand it.

That drive quality includes the smooth ride, the insane instant acceleration, the solid feel and handling, and more. You cannot measure this stuff. Even the specs regarding acceleration don’t tell the story, since the instant torque of electric cars makes gas cars feel like tractors or 1910 auto tech.

Another important matter which I can’t include in this comparison is safety. We know the Tesla Model 3 landed the best safety score ever from the NHTSA (the lowest probability of injury in a crash), but we don’t have precise data for the other models. Also, part of safety is in the semi-autonomous driving features. Tesla’s features are one solid step above the competition’s semi-autonomous driving features, but comparing these is too nebulous and ongoing changes come too quickly for a comparison to remain relevant for long. So, we have to cut these topics from the specs-to-specs comparison below.

With those notes out of the way, let’s get into the fun. Beyond drive quality and safety, there are several core specs we can use to compare the Model 3 to its prime competitors. 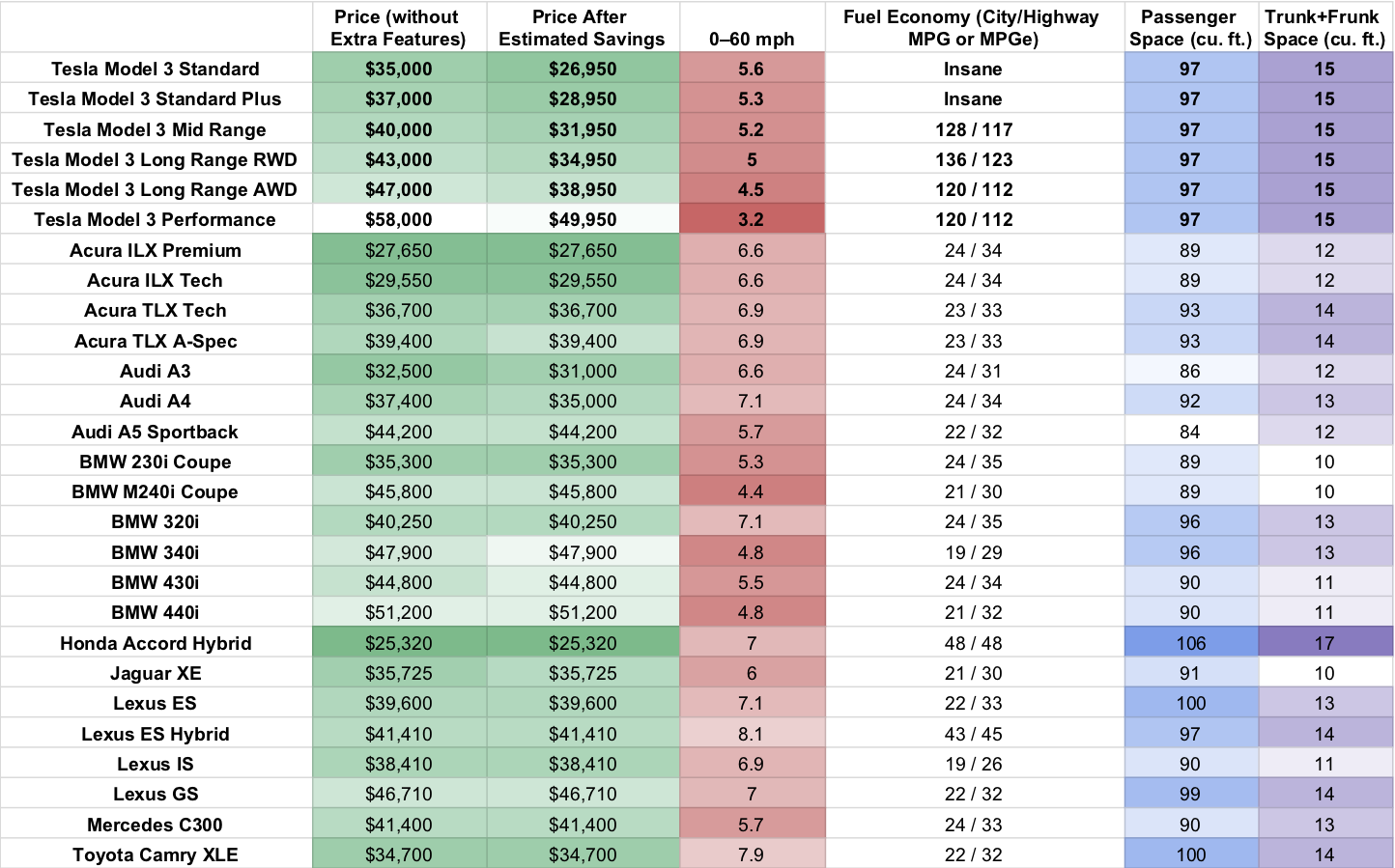 That’s a big table to look at, so let me provide some help summarizing the findings.

Every version of the Model 3 beats almost every other car on the list when it comes to 0–60 mph acceleration. Only a few BMW models beat out the Model 3’s slower trims. Importantly, though, the Model 3 benefits from instant torque, which makes it much quicker going 0–15 mph and 0–30 mph, which means it feels much quicker.

Of course, the Model 3 crushes the competition on fuel economy/efficiency (which is in MPGe, or miles per gallon equivalency, for electric vehicles).

With abundant space, insane acceleration, and unbeatable efficiency, a logical mind lacking context would think the Model 3 would be much more expensive than the other vehicles. But it’s not. The Model 3 base price is lower than most of the vehicles on the list. Again, that’s also despite the more advanced semi-autonomous tech, navigation system (and easter eggs), and better drive quality.

On its website, Tesla also indicates expected cost after savings (savings from the US federal tax credit and operational savings — but not including state, utility, or city savings). If you run with those savings, it’s absolutely clear: the Tesla Model 3 offers the best value for the money. It is — objectively — the best car you can buy for an upfront cash price of $35,000–47,000.

If you want that extra zip-zam-bam in acceleration, as I’ve written before, there’s no beating the Model 3 Performance for $11,000 more.

No, I don’t need a car. And I’ll be out of the country for 3–4 months, so I should really wait to consider this. But, yes, I’m thinking very seriously about clicking the order button. I have the financing tab open right next to this one. 😀