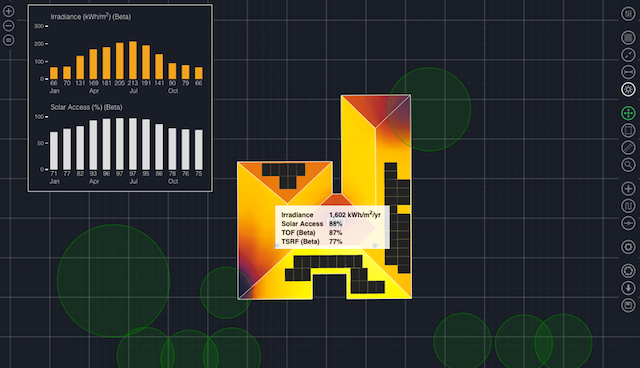 The solar power design and sales startup Aurora Solar has raised $20 million dollars in a Series A funding round. The California-based company uses technologies such as LiDAR and 3D computer vision to streamline the solar design and sales process. Founded by Sam Adeyemo and Christopher Hopper, the company’s software has been used for 1.7 million solar proposals. Mr. Adeyemo answered some questions for CleanTechnica about the software and company.

1. Why did you choose to go to East Africa as graduate students, and why did you decide to install a solar power system for a school there? Our original business idea was to create a company that designed, financed, and installed solar systems in Emerging Markets. The thought at the time was that solar makes tremendous economic and social sense in East Africa – there is generally abundant sunlight, and conventional forms of electricity are more expensive and unreliable. Although the system we installed was ultimately successful, the process of designing the solar installation was extremely difficult, inefficient and costly. We started developing software to make the process of designing future projects easier. By the time we graduated, we decided to focus purely on software – which is what Aurora is today – a software company.

2. What is ‘solar design’ for the lay person, and why is it difficult?

Every solar designer needs to answer three basic questions:
1. How many solar panels can fit on their client’s property?
2. How much energy will those solar panels produce?
3. How much money will that solar installation save their client?

To answer each of those questions, there are hundreds of decisions the solar designer has to make. They have to decide what are the best locations on the property to place solar panels (usually the sunniest), they need to decide which type of solar panel to install, calculate how the site conditions (shading for example) will affect the production of the panels and more. This is before they perform the economic analysis – this usually includes analyzing the property owner’s energy consumption and electricity bills, and calculating how much solar will reduce their bill.

Traditionally, solar installers had to go out to each individual site and conduct shade assessments, take measurements, get pictures of the roof or geography, collect bills, etc.. That involves not only driving to a site, but climbing on a roof with a handheld device — all of which add time and effort and costs installers – and their customers – money.

If you want to design and install solar projects for thousands of properties (residential and commercial), you can’t do it through the traditional site visit process — it’s simply too costly. It’s kind of a Catch-22: going to the sites is too expensive, but remote site assessments were not accurate enough. Aurora addressed those problems by building tools that make evaluating all of these different design decisions quick and easy, and by allowing installers to perform accurate remote site assessments.

3. How does your software make it easier and more efficient?

In order for a solar installer to avoid traveling to a site, they need to be able to accurately calculate the physical and environmental characteristics of a site. We have patented software that enables a solar installer to quickly create a 3D model of a site, and to quickly assess different system design choices. The key to Aurora is accuracy – the measurements that you get from the system are statistically equivalent to traveling to the site. It’s one thing to say we can do remote design without rolling a truck — it’s quite another to get to the point where you have not only NREL (DOE) but all the regional rebate authorities (such as NYSERDA) accepting the output of your software. Any rebate authority with capital or money to offset the cost of solar requires a shade report for each installation. Until we came along, most required installers to complete an in-person site visit. Those rebate authorities and NREL have evaluated our software and found it to be statistically equivalent to in-person site visits in terms of accuracy. For them to accept the output of third-party software requires a level of detail and precision that didn’t exist until Aurora.

If you want to deploy millions of distributed installations, the only way to do that is through software. We felt that the tools hadn’t kept up with the growth of the industry or the need to be able to make data-driven decisions in a scalable manner.

Soft costs (anything other than hardware like panels and inverters) comprise more than 50% of the cost of residential solar. That significantly limits solar adoption, because going solar still comes down to cost for most people. By streamlining the process and giving people data-driven ways to make decisions, we can speed things up and bring down costs.

Over 60,000 solar projects a month are designed using our software, by some of largest solar installers in the US, including SunPower, Blue Raven Solar, and Black & Veatch, all the way down to the local solar installers affectionately known as “Chuck in a truck.” The main reason they use Aurora is that it’s extremely accurate. It can forecast how many panels they’ll need for a system, exactly how much energy the panels will produce, and how much money it will save the customer, with real precision and accuracy without requiring the installer to leave the office.

4. When you say Aurora has been used to design one million solar installations, where were the installations  completed?

Aurora has actually been used to create 1.7 million solar proposals. Most of these were in the US, however they have been proposals created all over the world. Typically about 15% of solar proposals end up being installed.

5. About how many solar installations are designed with Aurora each year, and are they mainly in the US or are there also in other countries?

Over 600,000 in 2018, although this is growing rapidly. Most of the installations are in the US, however there is a large amount in Australia, N. America and Europe.

6. Is Aurora for commercial solar only, or can it be used on residential and carports?

Our software can be used for residential as well as C&I installations (including carports). In fact most of our volume, in terms of number of projects, is residential solar. In terms of MW, it is evenly split between residential and commercial solar.

We’re going to use the $20M to double down on our success to date and expand the field of services we can provide to solar installer businesses. We’re also excited to be able to grow our team – doubling our current 50-person staff will be a good first step. And we’ve got some exciting things up our sleeve from a technology perspective.

Specifically, we want to expand our engineering and customer success teams, and try to have a few more educational programs for the solar community. Our goal is to make a product that will make every solar installer more profitable, every solar installation better and more productive, every solar customer happier, and ultimately to help bring solar to everyone.

For small and medium size businesses, we want them to be able to run more of their business in Aurora. For larger organizations, we want to invest in technological and support services. 8.  Who is your target audience — do utilities use your software too?

Our target audience is anyone that wants to accurately and quickly design and sell solar. That includes many utilities. Our client base ranges from pure solar installation businesses, to government bodies and non-profit institutions.

9. Since you personally started your journey with a school solar project, has Aurora been used to design solar systems for schools?

Absolutely! Many companies have designed solar installations for schools. We also have many educational institutions that use our software, including Stanford, UC Davis, Top Energia (in Mexico) and the Los Angeles Unified School District.

Appreciate CleanTechnica’s originality and cleantech news coverage? Consider becoming a CleanTechnica Member, Supporter, Technician, or Ambassador — or a patron on Patreon. Don't want to miss a cleantech story? Sign up for daily news updates from CleanTechnica on email. Or follow us on Google News! Have a tip for CleanTechnica, want to advertise, or want to suggest a guest for our CleanTech Talk podcast? Contact us here.
In this article:solar design, Solar Design Software

The sales process in the solar residential sector can be tough. Sales reps have to deal with high customer acquisition costs, difficulties with team... Get A Free Trial Subscription To This Solar Design App

Originally published on Planetsave. If you’re solar-curious, and want to know more about the costs, benefits, and designs for integrating a solar PV system...