The Tesla Model 3 is an iconic car that will go down in history as the car that kick started mass adoption of electric cars in the United States. With hundreds of thousands of people around the world still waiting in line to get their hands on a Model 3, it is no surprise that as the early production vehicles have started to make their way into the hands of owners, they are getting more than their fair share of attention from vehicle modifiers and enthusiasts alike.

Today, we bring you a thread of some of our favorite paint jobs, wraps, and decorations on the Model 3.

1. Climate change wrap — Topping the list has to be this unique wrap job that takes Professor Ed Hawkins’ global temperature trend graphic and wraps the car in it. W saw this weeks ago when it was first tweeted and almost wrote an entire article about it. The unique graphic shows average global temperatures from 1850 through 2017 and provides a chilling visual representation of the warming of the planet since humans started really cranking out the emissions at the outset of the industrial revolution. 2. Tesla Road Trip Wrap — A father and son team hit the road in their Tesla Model 3 on a 6,000 mile adventure around the United States, including a stop-off for a tour of Tesla’s Fremont factory in Northern California. They documented their trip on their blog — Tesla Road Trip — which features their wrapped Model 3 and its celebration of zero-emissions electric cars and the enjoyment of driving. 3. T Sportline Matte Black vs Satin Black — When Tesla first showed off the Model 3 back in March of 2016, it featured a matte black Model 3 as one of the three exterior colors on display. Elon shared with MKBHD in a recent Tesla factory tour that they would indeed love to do matte but that they’ve not found a way to repair matte paint jobs in a way that keeps the look of the vehicle consistent. Until they figure out how to do that, T Sportline has you covered with its matte and satin black vinyl wraps. These hugely change the look of the car and give it a stealth look. Silent electric car + matte black wrap — what more could a ninja want from a car?

4. Satin Gold Dust Black — For those out there that like the darker tones of the matte finish but need just a bit more personality, there’s a new satin gold dust black finish that carries the dark, mysterious look of a satin wrap forward, but with a bit more sparkle.

It'll look similar to this Model 3 when it's done (that first car has a Satin Gold Dust Black wrap on it, so it won't be as dark, but that's the type of finish). pic.twitter.com/tSeP3nEWho

5. TheCleanTesla Nardo Grey — TheCleanTesla specializes in custom Tesla creations and responded to the challenge of the Model 3 with a sharp grey Model 3 with matte black rims. The resulting look feels like a fighter jet from one of the Mission Impossible movies to me, but maybe I was brainwashed as a child. Either way, the combination of the Nardo grey, the matte black, and the modern graphics make this one unique Model 3.

6. Pearlescent Blue — Some people just want to stand out and the essentially infinite color selection made available with vinyl wrapping lets people make those dreams a reality. This pearlescent bluish purple wrap from the team over at PHENOMenal Vinyl for Jeffrey Reyes is definitely not for those who want to blend in. The wrap instantly makes the car even more of a conversation piece. The wrap is so bright that it probably glows in the dark right along with all the other creatures on Planet Avatar.

Loving my model 3 thanks @Tesla @elonmusk …and the new wrap! keep up the good work @PHENOMenalVinyl pic.twitter.com/YCaSDczFZK

Editor’s note: That one above reminds me of a giant Hot Wheels car. And yes, I love it!

7. ‘Murican Street Shark — This car comes to us from the wild world of Reddit without much context. It was spotted at a Supercharger where it was clearly trying to blend right into its surroundings … or not. Part Fast and the Furious, part wild animal, part California dreamin’, and all American, it has yet to see its equal. Without knowing anything else about it, I’m branding it the ‘Murican Street Shark for obvious reasons and just leaving it at that. And yeah, I know they’re not shark teeth, but c’mon. 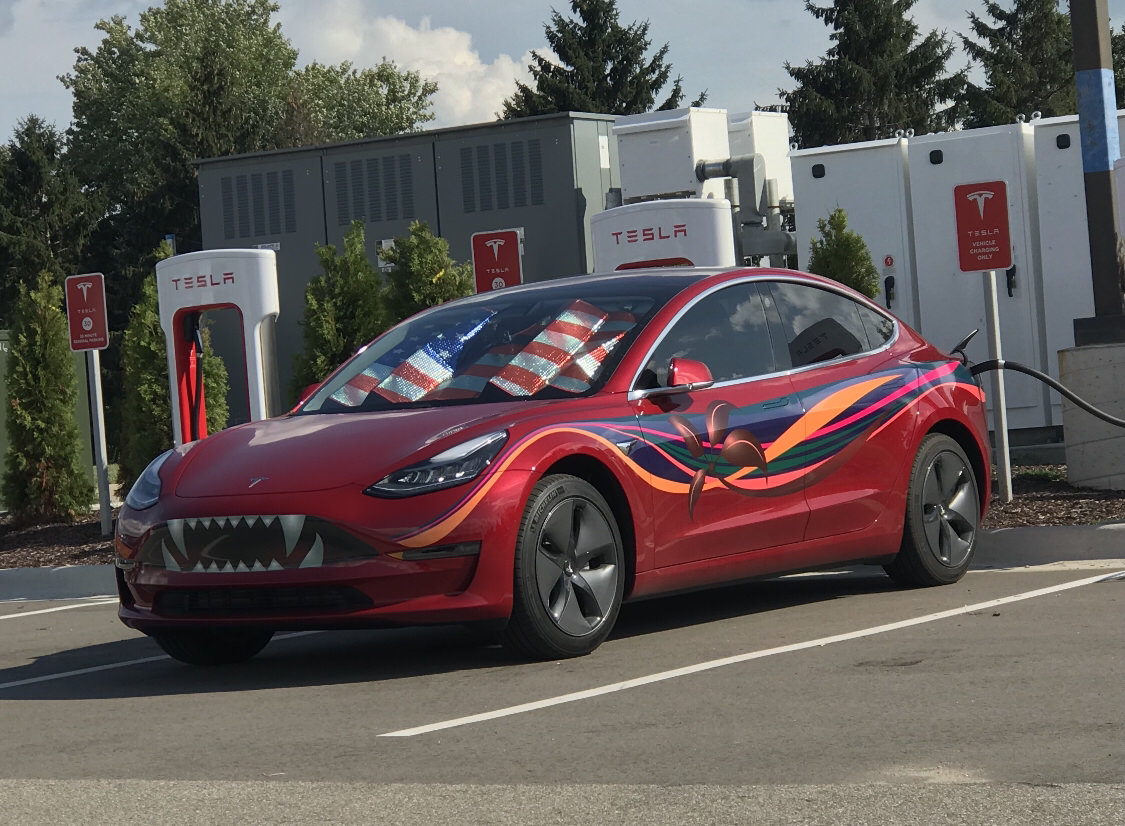 8. Satin Perfect Blue Model 3 — T Sportline offers a full range of vinyl to wrap the Model 3 in and clearly isn’t afraid to use it. This one was treated to a satin perfect blue wrap on the body along with a Matte Black chrome delete kit to keep all the blue trimmed in. The windows were also given the wrap treatment with a 3M Crystalline window tint all around that keeps the interior that much more protected from the harsh sun. Capping the package off are a set of 19″ TST wheels, also in matte black. This color package screams loud and proud that it wants to be looked at, but hints at a sneaky side hidden underneath all at the same time. I’m conflicted.

Click the link in our bio for all our Local Custom Services we perform in ☀️Los Ang… https://t.co/SsA39XowDY pic.twitter.com/aXM3doWokb

9. T Sportline gloss hot pink — Just in case the last one wasn’t bright enough, here’s a wrap that takes the classic pink and kicks it up a notch with some gloss. I’ll just leave this here…

10. CleanTechnica’s Model 3 — We are passionate about what we do and our Model 3 isn’t nearly as fancy as those that came before, but it does proclaim our message loud and proud, sporting what now feels like a smallish vinyl sticker with rim protectors from EV Annex.

What do you think? Do any of these make you want to wrap your Tesla? Is one of these yours? Let us know what you think in the comments below and maybe we’ll feature your electric car — Model 3 or otherwise — in our next roundup.

Don't want to miss a cleantech story? Sign up for daily news updates from CleanTechnica on email. Or follow us on Google News! Have a tip for CleanTechnica, want to advertise, or want to suggest a guest for our CleanTech Talk podcast? Contact us here.
In this article:paint, Tesla Model 3, Tesla Model 3 wraps, Vinyl