This historic result was the result of a perfect sales storm. Not only did Renault decide to put all hands on deck and pull in a record result for the Zoe, trying to end its long waiting list, but most importantly, this was the first full month of deliveries for the new Nissan LEAF, and the result was … Earth-shattering. The 6,000+ result is not only a new monthly record for a fully electric car in Europe, but it’s the second-best result ever for a plug-in car on the Old Continent, only behind the 6,485 units achieved by the Outlander PHEV in December 2015, when an incentive change in the Netherlands inflated all PHEV sales to an enormous degree.

And, remember, this was the LEAF’s first full delivery month. Talk about landing with a bang!

But we must mention a few more important pieces in the Record Puzzle: Both Teslas delivered what they hadn’t managed to do in previous months, with the Model S performing its best result in 27(!) months. Other honorable mentions were the BMW i3, with 2,300 deliveries, which had its best result in 18 months; and the Mitsubishi Outlander PHEV itself, which recorded 2,514 registrations, its best result in 2 years. The VW Passat GTE had its best result (1,482 registrations) since December 2016, and the relatively new Kia Niro PHEV broke the 1,000 unit barrier for the first time, boding well for its upcoming BEV version.

Interestingly, looking at the list of March best sellers, 6 out of the top 7 are BEVs, which is telling regarding the direction the plug-in market is taking in Europe… #1 Nissan LEAF – Simply Amazing. The 2.0 version of the most popular* plug-in in the world had its first full delivery month in Europe last March, and by scoring 6,053 registrations, the Nissan hatchback recorded the second best result ever in Europe for a plug-in car. With the order list at over 15,000 units, expect the LEAF to remain at around 5,000 units in the coming months, limited only by the Sunderland production capacity. But back to March, the main markets were Norway (2,172 deliveries, a new all-time record for a single model), the UK (1,500), France (719), Germany (346), and the Netherlands (299). [*Most popular in terms of total historical sales.] #2 Renault Zoe – This car’s 4,248 deliveries in March meant a new record for the French hatchback as Renault is running to end the Zoe waiting list — now that LG has more batteries to provide the French automaker. As for individual market performances, the domestic market did the heavy work as usual, by providing a record 2,245 registrations. Other positive numbers came from Germany (523 units), Norway (347), Portugal (161 units, new all-time record for a single model), Austria (152) and Spain (150).

#3 Tesla Model S – Due to the automaker’s focus on the production of the Model 3 earlier on, it seems Tesla starved the Model S deliveries in Europe, but then March came, and boatloads of S’s landed on this side of The Pond, with deliveries up 26% year over year (YoY), to 2,791 units. That’s the Model S’s best result since 2015. It appears the Model 3 reveal not only didn’t hurt sales, but may have actually helped them — many buyers preferred not to wait and bought the older, more expensive model instead of waiting for ages for the Model 3 to cross The Atlantic. Looking at individual countries, besides Norway’s usual contribution (676 deliveries), the Netherlands (588 deliveries, a new record) and Germany (304 deliveries) were also heavy contributors. But it was a generally positive month throughout the continent for the world’s premier sports sedan. Looking ahead, logic would say that deliveries should start falling as the year advances and the Model 3 arrival gets closer, but the Model S has surprised us before, so… 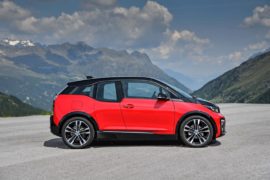 #4 BMW i3 – The German hot hatch’s sales remained positive (+16%) in March, with 2,300 units being delivered. With the Leipzig factory going at full steam, do not expect the Bavarian carmaker to be worried with its angry-puppy-faced EV sales performance. Looking at individual countries, Norway is once again leading sales (528 units), with Germany (459) following suit and France also presenting a strong result. Looking into the remaining months of 2018, expect deliveries to remain stable, as demand does not seem to wane.

#5 Mitsubishi Outlander PHEV – Solid as a rock, the Japanese SUV managed to secure another top 5 presence in March, thanks to 2,541 registrations, with sales even growing 7% YoY. The Mitsubishi model continues to profit from its unique mix of space, AWD, range, and affordability (€40,000). This combo makes it popular in markets like the UK (1,300 units), Norway (438), and Germany (153). Looking forward, the Japanese SUV is expected to receive an update soon, so it should keep wearing its crown as Europe’s Best Selling PHEV in the foreseeable future. Looking at the 2018 ranking, the headline goes to the new Nissan LEAF, jumping four positions to 2nd and already endangering the Renault Zoe leadership. Both Teslas profited from their usual end-of-quarter peak to climb in the ranking, but this time the tide was higher than expected, with the Model S jumping 14(!) positions to #6 while the Model X joined the top 20 in the #14 position.

The other significant changes in the top 20 were the BMW 530e climbing two positions to #12 and two models having significant drops — the Mini Countryman PHEV stumbling 6 positions to #18 and the Porsche Panamera PHEV sliding down 4 positions to #19. And this despite the fact the German sports sedan registered 766 deliveries, a new monthly record for any Porsche plug-in.

Considering April, initial indications predict another smashing month from the Japanese automaker, so it won’t be surprising to see Nissan jump from 4th to 2nd in the next edition.