We actually need carbon neutral energy for more than grid electricity. We need carbon-neutral transport too, and in one transport application, nuclear makes an ideal fit.

On land, nuclear powered electricity is no longer a competitive US option in a carbon-constrained future when solar is already at 3 cents per kilowatt-hour and wind is even less.

Nuclear takes decades to permit, driving up costs, it routinely has cost overruns once it is in construction, and the whole time it faces opposition from residents nearby. These factors all drive up costs.

Plus, as with any thermal power plant, it takes a lot of material and labor to construct, compared to PV in particular, which is pretty much just a matter of laying down a mass-produced product out in a field.

At the atomic level, electricity is only generated when electrons move, which is what an electric current is. And there’s two ways to make electrons move. There’s the hard way, which we’ve done for over a century, and the easy way. Coal, gas, geothermal, hydroelectric, and nuclear all must rotate large, complex and heavy mechanical systems within a magnetic field to make electrons move.

Unlike all these thermal methods of creating electricity, which boil water to make steam to make huge machines revolve, a solar panel instead operates at the atomic level.

The sun emits photons of sunlight. Instead of a big rotating machine to move electrons, photons push electrons out of the way, so that when each one moves, a new electron takes its place.

Once a solar panel is manufactured with that magic inside, it is basically a simple object that can be mass-produced. And making and setting up any mass-produced object, as economies of scale kick in, causes a drop in cost, which is why solar is rapidly dropping in price.

By contrast, any thermal power plant is going to remain more expensive to build, and none more so than a nuclear power plant.

Where Nuclear Could Compete: Cargo Shipping

In cargo shipping, nuclear power could be the winner, according to a research paper, Considerations on the potential use of Nuclear Small Modular Reactor (SMR) technology for merchant marine propulsion.

We have already been using small nuclear power plants on board more than 140 submarines and some icebreakers since the 1950s. These have been quietly plying the oceans for a good 65 years with no accidents.

But even more effective greenhouse gas reductions are possible with commercial cargo shipping simply because we have a lot more cargo ships than US military submarines. Cargo ships move over 90% of global trade on the high seas. These are now running on fossil fumes.

Not only do these emit 1.12 billion tonnes (British count) of CO2, according to CleanShipping.org‘s 2008 report, but they also add a layer of about 133,000 metric tons of black carbon each year to the atmosphere. When black carbon falls on snow it decreases its albedo, the reflectivity of snow, so it adds to climate destruction in both ways.
(And if you have ever been on a ship, you know that these nasty diesel oil fumes really stink, too!)

But the most typical fossil fuel is diesel. It is going to take some effort to displace diesel oil for cargo shipping, among them familiarity, expertise, easy access to spare parts, and a global distribution network of diesel oil, according to a Marine Study looking at various clean options for shipping.

Advantages
1. Diesel engine technology is a well understood and reliable form of marine propulsion and auxiliary power generation technology.
2. The training of engineers to operate diesel machinery is well known and facilities exist for the appropriate levels of education.
3. Engine manufacturers have well established repair and spare part networks around the world.
4. Diesel fuel in all grades has a worldwide distribution network and is easily obtainable.

All of these home team advantages would need to be overcome for nuclear to displace diesel oil.

How Big a Power Plant Would a Nuclear Ship Need?

The nuclear power stations used in submarines are physically very small: under six feet wide by 15 feet tall. And at between 10 and 40 megawatts (MW), they are also smaller in capacity than what would be needed for a cargo ship.

It takes about 150 MW to power a typical cargo ship, using diesel generators.

Submarines and ice breakers have long used these small nuclear power plants on board. According to World Nuclear  (which just updated its website in January, as the new administration came in):

“They deliver a lot of power from a very small volume and run on highly-enriched uranium (actually a uranium-zirconium or uranium-aluminum alloy). They need refueling only once every ten years, due to long core lives. Newer cores are now capable of going 30-50 years between refueling.”

There will be zero support for the renewable solutions to climate ruin for the next four years. The Trump administration will incentivize either fossil energy or nuclear. Better that they focus on nuclear from a climate point of view, but a nuclear application that might make a difference.

Nuclear for land-based electricity no longer makes sense in the US. No amount of support is going to bring down those costs.

Even wind and solar’s more expensive cousins, offshore wind and dispatchable thermal solar, are already much cheaper than nuclear, and they have only begun generating at utility scale in the last few years, unlike nuclear electricity.

A lot of price reduction comes from scale.

On land, mass-produced small nuclear plants, where most modern nuclear innovation is, will never gain acceptance as small plants only make sense close to load. And load is where all the people are. And all the people distrust nuclear. So, land-based nuclear is out.

But with thousands of cargo ships now plying the seas, small nuclear could provide the mass market that could drive down manufacturing costs, and make nuclear cargo shipping cost effective compared to diesel-fueled shipping.

So the question is: what problems would we need to overcome, and how would we do that? The shipping giant K Line has high expectations for wind power and the fuel efficient cargo ship of the future. 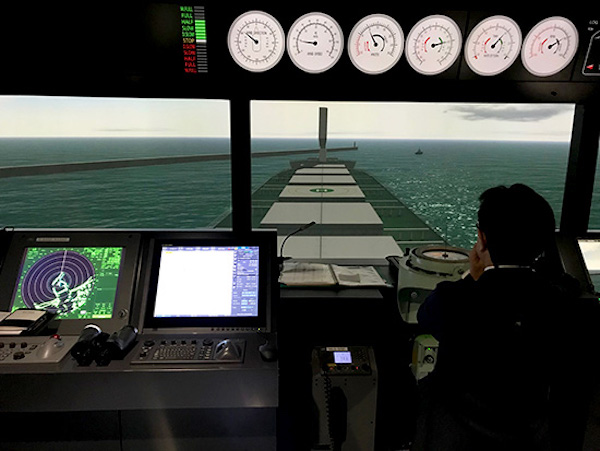 Old and new collide in Japan with the "Wind Challenger" research mashup of green hydrogen, hard sails, and cargo ships.