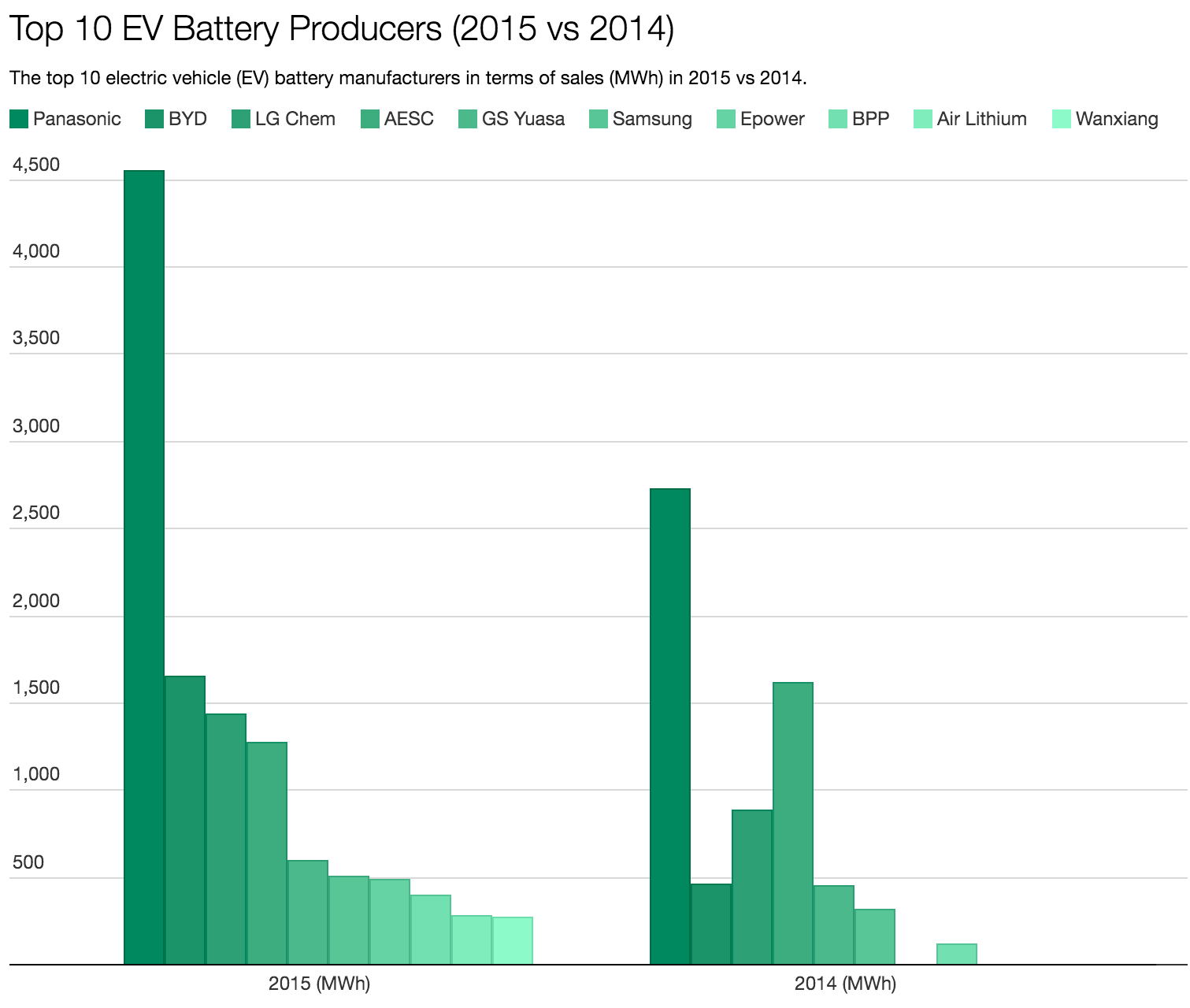 Electric vehicle battery sales figures for December 2015 were recently revealed by the EV Sales blog, thereby allowing us to take a look at year-end totals for 2015 for the first time. These totals largely show us what we already knew — that Panasonic remains on top of the pile, and that BYD and LG Chem continue to grow. But they put interesting numbers to the story.

Panasonic’s consumer electric vehicle (EV) battery sales for the year totaled 4,552 megawatt-hours (MWh) worth of lithium-ion batteries. This figure represents quite a year-on-year rise from 2014 — when 2,726 MWh worth of batteries were sold by the company. The company’s market share has remained level at around 38%. The reason for Panasonic’s market dominance is largely down to the company’s partnership with Tesla Motors, and the relatively large battery-pack sizes used in the Tesla Model S and Model X.

It should be realized that BYD’s substantial electric bus battery operation isn’t included here, owing to a lack of reliable figures — if they were, then BYD would no doubt be running head-to-head with Panasonic.

LG Chem took the third position, with 1,432 MWh of lithium-ion EV batteries sold during the year — up from 886 MWh in 2014. Market share remained level at 12%. LG Chem is the supplier for the Chevy Volt plug-in hybrid (PHEV) and will be the supplier for the soon-to-be released Chevy Bolt — which will feature a notably larger batter pack than the Volt — but it also supplies batteries for numerous less-popular EVs & PHEVs.

AESC, the joint venture between NEC and Nissan, continues to lose share (Down 12%(!) YoY), with the Leaf sales losing steam and with Nissan outsourcing batteries to LG in the future, the future is bleak for the Joint Venture.

In a fast growing market, Lithium Energy Japan (GS Yuasa / Mitsubishi) sales have risen on a modest rate, hampered by the small battery volume each Outlander PHEV has.

Samsung has a partnership with BMW and FIAT, and with both auto manufacturers plug-in sales improving, Samsung has beaten last year result by a large margin, albeit it wasn’t enough to win market share.

Epower is the first of a series of small chinese battery makers at the bottom of the ranking, with BPP in #8, Air Lithium (Kandi provider) in #9 and Wanxiang in #10, an interesting fact is that all of them have increased share regarding last year.

Future developments to keep an eye on are: the continuing rise of the Chinese sector, the launch of the Tesla Model 3, and the beginning of production at the Tesla/Panasonic Gigafactory.