Tesla has released some preliminary plans. The rumours about it looking at sites in New Mexico and Nevada were correct. There are also potential locations in Arizona and Texas. Tesla is making a final site selection and hopes to start construction on the Gigafactory this year. By 2020, it hopes to be producing 500,000 vehicles a year, with its batteries coming from its Gigafactory. Tesla estimates it will need $4 billion to $5 billion to do this. It intends to raise $1.6 billion by selling bonds, but has also been looking for partners. That may explain meetings with high-profile companies like Apple. (As Bloomberg puts it, Apple has $158 billion burning a hole in its pocket and “could do worse than to become synonymous with the current ‘it’ company in tech and automaking.”) Rumour has it that Panasonic and Sanyo may each put in a billion. In its press release, Tesla says:

As we at Tesla reach for our goal of producing a mass market electric car in approximately three years, we have an opportunity to leverage our projected demand for lithium ion batteries to reduce their cost faster than previously thought possible. In cooperation with strategic battery manufacturing partners, we’re planning to build a large scale factory that will allow us to achieve economies of scale and minimize costs through innovative manufacturing, reduction of logistics waste, optimization of co-located processes and reduced overhead.

The Gigafactory is designed to reduce cell costs much faster than the status quo and, by 2020, produce more lithium ion batteries annually than were produced worldwide in 2013. By the end of the first year of volume production of our mass market vehicle, we expect the Gigafactory will have driven down the per kWh cost of our battery pack by more than 30 percent. 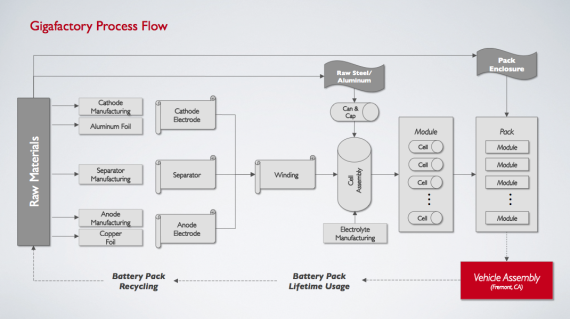 After the batteries are finished, they will be shipped back to Fremont, where Tesla will continue to assemble finished vehicles.

This is all speculation, of course, but is anyone willing to bet Elon Musk won’t do it?

Don't want to miss a cleantech story? Sign up for daily news updates from CleanTechnica on email. Or follow us on Google News! Have a tip for CleanTechnica, want to advertise, or want to suggest a guest for our CleanTech Talk podcast? Contact us here.
In this article:Apple (AAPL), Apple Car, Elon Musk, panasonic, Sanyo, Tesla, Tesla Factories (Gigafactories), Tesla Model S, Tesla Panasonic