–> See how much money solar power could save you!

There are a lot of ways to evaluate the attractiveness of a place for renewable energy or solar energy investment, and to evaluate the best solar states. Of course, it depends on what factors and assumptions you take into account, as well as what segment of the market you are actually evaluating.

One of the leading evaluators of such markets is Ernst & Young (EY). The “professional services firm” recently released its most up-to-date renewable energy attractiveness indices for the US, including a solar energy index. The report includes solar market data for 2012 as well as a well-researched ranking of states by their solar energy investment attractiveness. The overall summary is clear, as we have been writing for months here on CostofSolar.com: the US solar market is booming.

“In 2012 the US installed 3,313 MW of solar photovoltaic (PV) capacity, with 1,300 MW coming in Q4 alone, surpassing both annual and quarterly records. Even with falling costs the dollar value of the market size of the US solar industry grew 34% in 2012,” EY writes. “The cumulative total of solar PV in the US is now at 7,221 MW, with cumulative PV installations exceeding 300,000 individual units.”

A new solar panel installation is now occurring every 4 minutes in the US, according to an analysis from GTM Research.

As I’ve reported a few times previously, solar leasing is hot. This is partly due to the fact that residential solar power has become quite cheap, and partly due to the fact that people are attracted to $0 down purchasing options, especially when the products (i.e., solar panels) save them money from Day 1. This makes going solar a no-brainer (even more than it already is).

EY writes: “Third-party ownership or leasing of rooftop solar PV systems in the US accounted for more than 50% of the residential and commercial market in 2012. Average residential system prices dropped nearly 20% between Q4 2011 and Q4 2012, and industry experts expect this segment of the market to surge as third-party financing options spread throughout the country.”

US Southwest Is Hot

The leading states are largely in the Southwest, thanks in part to its tremendous solar energy potential, but there are some outliers.

“The top five states for solar electric capacity installed in 2012 were California (becoming the first state to install over 1,000 MW in a single year), Arizona, New Jersey, Nevada and North Carolina, while the leaders in cumulative solar capacity installed through 2012 were California, Arizona, New Jersey, Nevada and Colorado.”

The 10 most attractive states for solar energy investment, according to EY, are now: 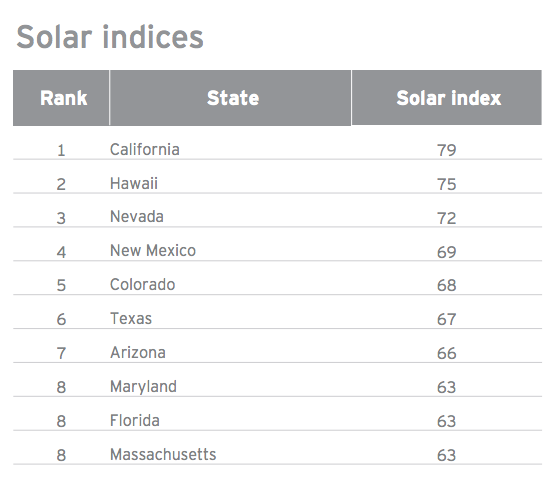 Overall, I find the EY report very useful, as it includes fairly comprehensive policy and market analyses, and even does so for the top solar states.

However, as people who have read me for awhile know, I’m a big fan of relative rankings… of which there are very few. Looking at absolute rankings such as total solar power capacity, you miss who is leading the way on a per capita or per GDP basis. And you miss which states offer the best return on investment for a single residential solar power system.

If you’re curious about the latter, you may have noticed that we’ve already shared a great ranking on that, which changed the above order a bit to come up with this top 10 ranking: 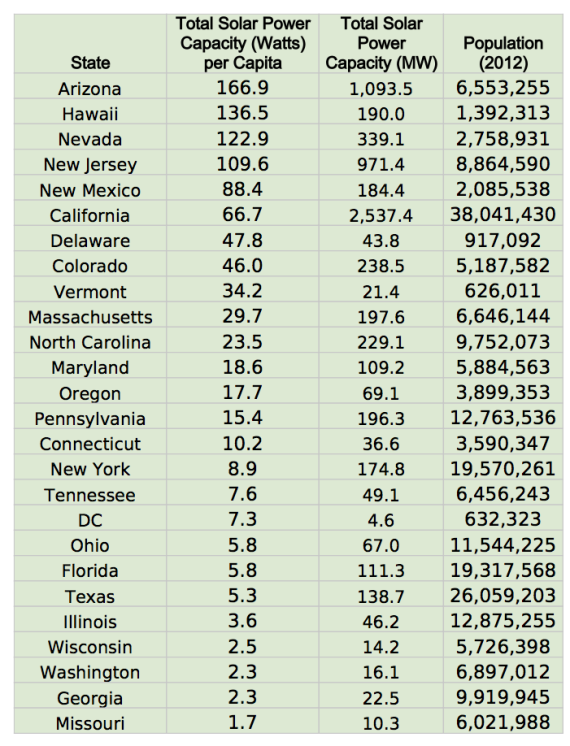 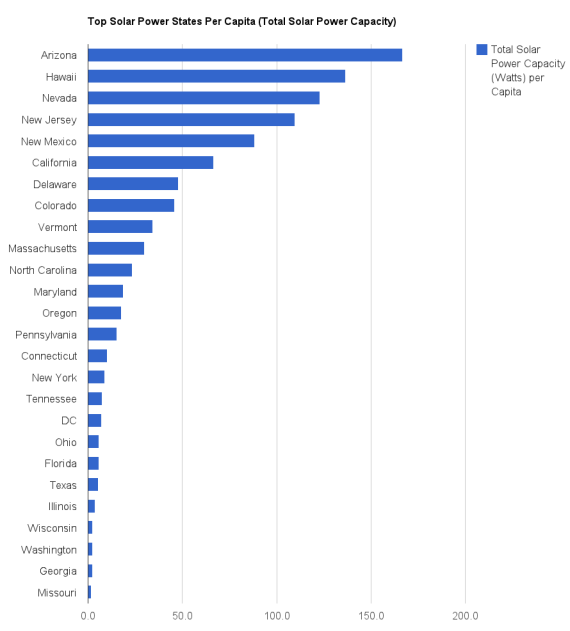 In the end, I think all of this data is quite interesting. And it offers useful lessons of different types. The EY ranking is certainly useful to investors and major companies who want to figure out the policies and market of one or more states in order to invest in solar projects for the best return on investment (ROI). It also helps show how large states and even countries can better promote solar power.

The solar ROI study briefly mentioned after that is actually useful for the same thing (through slightly different data and research). But it’s also useful for individual homeowners or small businesses who are considering the switch to solar.

And the per capita rankings show us who the true state leaders are, showing us which states’ solar or electricity policies would be most worth emulating.

But, really, for our main audience (the common Joe), there’s simply one thing to do: find out how much solar power could save you, get connected to the best installer for your money in your region, and go solar so that you can start savings tens of thousands of dollars off your electricity bills.

The longer you wait to make the switch, the more money you are throwing away on dirty power from a monopolistic utility company. And the fact is, you can get an estimate of how much you’d save in less time than it takes to watch another cat video or Gangnam Style.