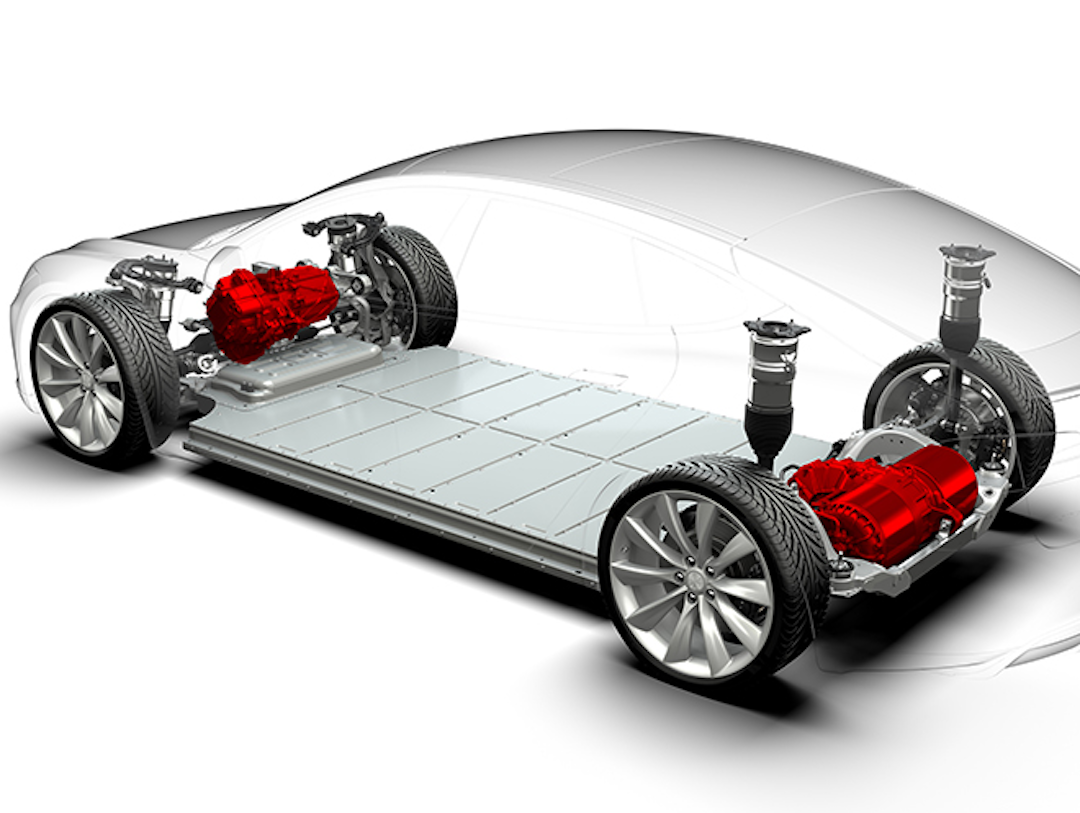 Above: A look at a Tesla battery pack (Source: Tesla)

Xcelerate is an EV-oriented company run by a group of Tesla alumni. Since 2012, the company has been offering a range of financial services for EV drivers, from financing to leasing to extended warranties.

Obviously, the most critical (and expensive) component of any EV is the battery. In the US, most EVs carry an 8-year, 125,000-mile battery warranty (exact coverage may vary), but some popular EV models have been around long enough now that many owners find themselves out of warranty, and there’s a demand for extended warranties that cover the battery and powertrain.

Offering such a warranty carries a substantial risk, however. Underwriters depend on statistical information about the products they insure, but at the moment there’s little data about battery longevity. EVs simply haven’t been around long enough for the number-crunchers to be able to predict how long the average battery will last. That’s why, as the Xcelerate execs explained to me, some VSCs (vehicle service contracts) may offer very limited battery coverage, but nobody is currently offering full replacement.

That’s about to change — Xcelerate is in the final stages of development of a new warranty product called XCare Battery + Drive Unit, which is expected to almost double the duration of the manufacturer’s battery and drive unit warranty.

Here’s what the Xcelerate team told me about their new “full-replacement” battery warranty.

Charles: How big a financial risk are you taking by offering this warranty?

Milad Davoodi: We might not know all the answers about how frequently the batteries fail. We don’t know what the overall fail rate is going to be. We do know how much it costs to replace these batteries. We do know the likelihood of having to repair versus replace, as far as the decision that Tesla will make whenever they service it.

We are taking a gamble on behalf of the entire industry. And we’re doing it because we know we’re best fit to do so, to pivot and be agile to make sure that we can not only retain this offering, but continuously iterate on it as time goes by, making it available to a larger percentage of owners [and] older vehicles, once we are able to accumulate some of those answers about fail rate and so on.

This is really the first and only [such warranty] that we’ve seen in the EV space. Even with Tesla, they’ve had no opportunity to increase the warranty window for the battery and drive unit. And to my understanding there has been no OEM that has been able to successfully do that.

That’s really big, because we’re at the point where the oldest EVs are 12 years old [a 2010 Nissan Leaf, for example]. We’re talking 10 years old for Teslas. So, number one question: What’s the fault rate? What’s the percentage of failure that my battery’s going to have? How often are people having to [replace] their battery packs? How much does it cost? When does it occur? Can we repair them? What’s the actual servicing ability for all this?

One of our core tenets is making sure that we build value in the EV space by creating products that add value to the products that we already own, and this is the best example of that. We all know that a Model 3 that doesn’t have a battery warranty, if you have a $16,000 battery replacement cost, you’re going to have a lot more value in the car for a vehicle that has a battery warranty for the next eight years versus one that doesn’t.

Brent Seavey: One thing I’d like to piggyback on that: The older a car gets, the greater the percentage of the value of that car replacing the battery is. If you buy a used Tesla at $40,000, and you have to replace a battery pack at $20,000, well that’s half of what you paid for the car. So, it becomes a lot more of a burden because the people in that price category are probably a lot more price-conscious, so those people would be hit especially hard with a $20,000 service bill. Now your $40,000 car becomes a $60,000 car because you just had to put 20 grand into it to replace the battery.

KJ Gimbel: And to put a bow on it, the way that we did it is also pretty innovative. The [amount] we’re willing to insure is $25,000, and as far as we know, there’s no battery that is exceeding that [cost]. So we’re not just going to provide a little bit of coverage on a battery pack. Even the most expensive battery packs out there on some of the older Model S and Model X are going to be well under that.

And we are doing it in a direct-to-consumer e-commerce platform, to make it as easy and frictionless as possible for the end user to simply go on the site and see what they want, acquire it right there through Apple Pay, Google Pay, whatever their method is, and transact immediately rather than having to go through a long drawn-out conversation with somebody on the phone. All of our information, any of the exclusions, are going to be right there in front of everybody, so it’s 100% transparent and it’s very easy to absorb.

Charles: Do you extend the warranty in terms of time or mileage or both?

Milad Davoodi: Both, across the board.

Charles: And there are different options to extend it for a longer or shorter time?

Charles: Do you cover just Teslas, or other EV brands also?

Charles: And when is this new warranty offering going to be available?

Milad Davoodi: It’s safe to say 2023. Right now we are working on developing the site so we can sell it, and we are now getting it approved. These contracts have to be approved state by state, so now we’re about to send it out to all the states to get it approved so we can start selling it.

Milad Davoodi: Exactly. The first XCare [product] is XCare EV Protection, and the new product is XCare Battery + Drive Unit. We don’t want to confuse anybody, so we’re going to clearly tell everybody there’s no crossover here.

Charles: This covers battery failure, but does it also cover battery degradation (loss of capacity over time)?

Milad Davoodi: Yeah, we use the same terms as Tesla. The 70% mark.

Charles: Customers don’t have to get service at Tesla or at the dealership, right? They can get the car serviced at different places.

Milad Davoodi: Right. We don’t call inspectors in, we don’t order parts from different people, we don’t negotiate on the labor charges. Tesla [or another service facility] is making all the determinations. We just pay the bill.

And we wanted to take it one step forward. Every once in a while [customers] meet a service advisor that doesn’t feel comfortable about accepting third-party payment. We build everything around direct-to-consumer models, and we really want to make it easier, so no matter who you’re going through, payment is still simple and direct.

How will we do that? We will give our members a debit card that is branded XCare, that is assigned to you, and we will load the service amount during the claims process. So instead of sending payment directly to the service center, we simply authorize your card for the exact amount you need, whether that’s a physical or digital card. It changes how we look at insurance products. What if you had multiple different variations of XCare? Are we going to send you three different types of payments, or do we just authorize one card?

Charles: So, with the new XCare Battery + Drive Unit warranty, in conjunction with XCare’s existing warranty products, every EV driver can have true bumper-to-bumper coverage. To learn more, drivers can visit www.xcelerateauto.com/xcare. Tesla Battery Life Longer Than Anyone (Except Elon & JB) Expected

Worried about having to pay a lot of money to replace the battery in an electric car? If it's a Tesla, you have nothing...