The body and chassis of the Audi Q8 e-tron are connected.

The first Audi Q8 e-tron rolled off the production line at Audi’s factory in Brussels, Belgium on December 14th. The event in and of itself was fairly mundane, with employees and company leadership standing at the end of the production line to drive the vehicles off the line. Disclaimer: Audi paid for travel and accommodations for the author to attend the SOP event.

Before the launch, e-tron was an almost experimental label, tacked onto plug-in hybrids and the company’s first fully electric vehicle, simply dubbed the Audi e-tron. It was a one-off within Audi and didn’t really fit into the brand’s overall lineup of sedans, sports cars, and SUVs. The formal start of production of the Q8 e-tron and Q8 Sportback e-tron changes all of that, formally integrating electric vehicles into the Audi family of vehicles as the company takes the first few strides into the fully electric future.

The future of Audi is electric and that is a huge deal. For years now, electric vehicle pundits have talked about the advantages upstarts have over their legacy counterparts. No culture to change. The advantage of being the underdog. Having a missional company from day one. The lack of any sunk costs for legacy combustion vehicle lines. The list goes on. The Q8 e-tron and Q8 Sportback e-tron changed all of that in one single day. In Brussels, the chassis, transmission, e-motor, and high-voltage battery are installed in the body of the Audi Q8 e-tron. Image courtesy: Audi

This day has been in the making for years and to truly understand the culture at Audi and specifically, the Audi Brussels plant, we’ll have to rewind the tape a few decades.

The factory itself is nestled in amongst residential and commercial buildings of Brussels. It has formed a key piece of the fabric of the city for decades, since it opened in post World War 2. That in and of itself was a massive feat, showing that Europe was finally dusting itself off from the horrors of the war and rebuilding a new European industrial machine. The Brussels factory produced nearly two dozen different vehicles for the Volkswagen group and the rich history of that legacy is evident throughout the factory.

Production started off with the Studebaker and evolved over the years, producing a range of models. Volkswagen took ownership of the plant in 1970 and it produced some of Volkswagen’s most iconic vehicles including the Passat and Golf. In 2007, the decision was made to convert Brussels production to Audi and it began a new life yet again. It produced various A1 and S1 models up until 2016 when a new chapter was opened in Brussels. 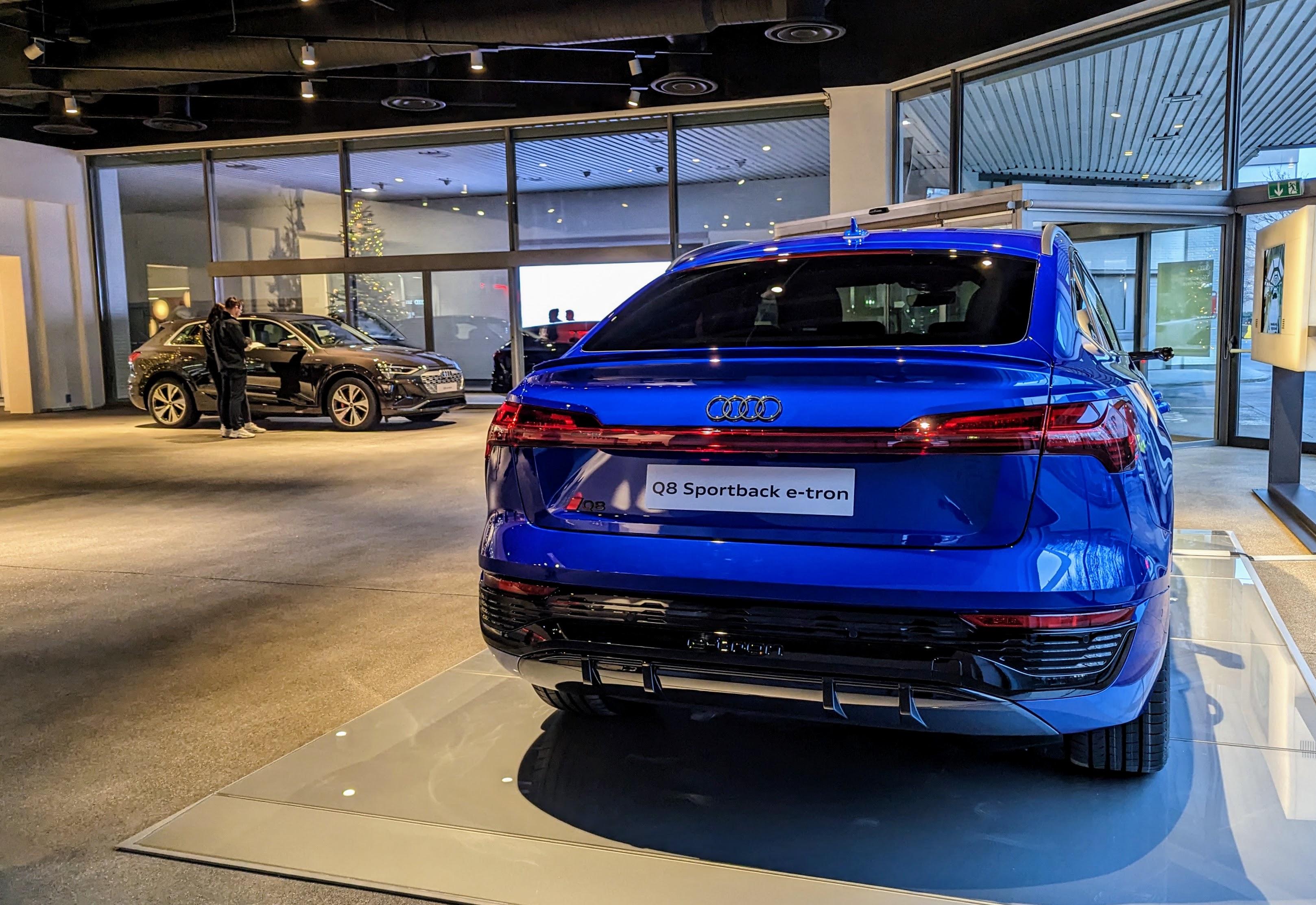 The new Audi Q8 Sportback e-tron in blue with the Q8 e-tron in the background. Image credit: Kyle Field, CleanTechnica

No longer would production lines crank out transmissions and powerful petrol engines. The trunk-sized power plants that had moved their vehicles forward for decades would be replaced by electric motors the size of a large watermelon. Gas tanks were out in favor of flat, dense battery packs filled with a completely new cocktail of materials that required rethinking the entire supply chain and came with their own challenges with extraction, second life disposition, and recyclability.

The change was rapid and in a very short span, Audi had converted the Brussels plant to produce only the fully electric e-tron. Against all odds, Audi has seemingly successfully converted its Brussels factory and pulled a rather rapid about face. It has taken the leap forward into the electric future and has landed on two feet. The Q8 e-trons and Q8 Sportback e-trons rolling off the production line on its first day are proof of this. The Q8 e-tron moves the needle forward for Audi, with 373 miles / 600 kilometers of range per charge (WLTP) and 170 kW DC fast charging capability. It’s just not just a fast peak charging rate, but Audi also fine tuned the charging curve to maximize power delivery. On paper, that translates to a charging time from 10-80% of just 30 minutes but we will have to wait to see what both the range and charging speeds translate to in the real world.

To achieve the new, higher range, Audi did a ton of work throughout the powertrain and battery pack, but the stand out is in the aerodynamics. The vehicle’s low profile digital mirrors and overhauled grill work together with the underbody shielding to give the vehicle its impressive 0.24 coefficient of drag. 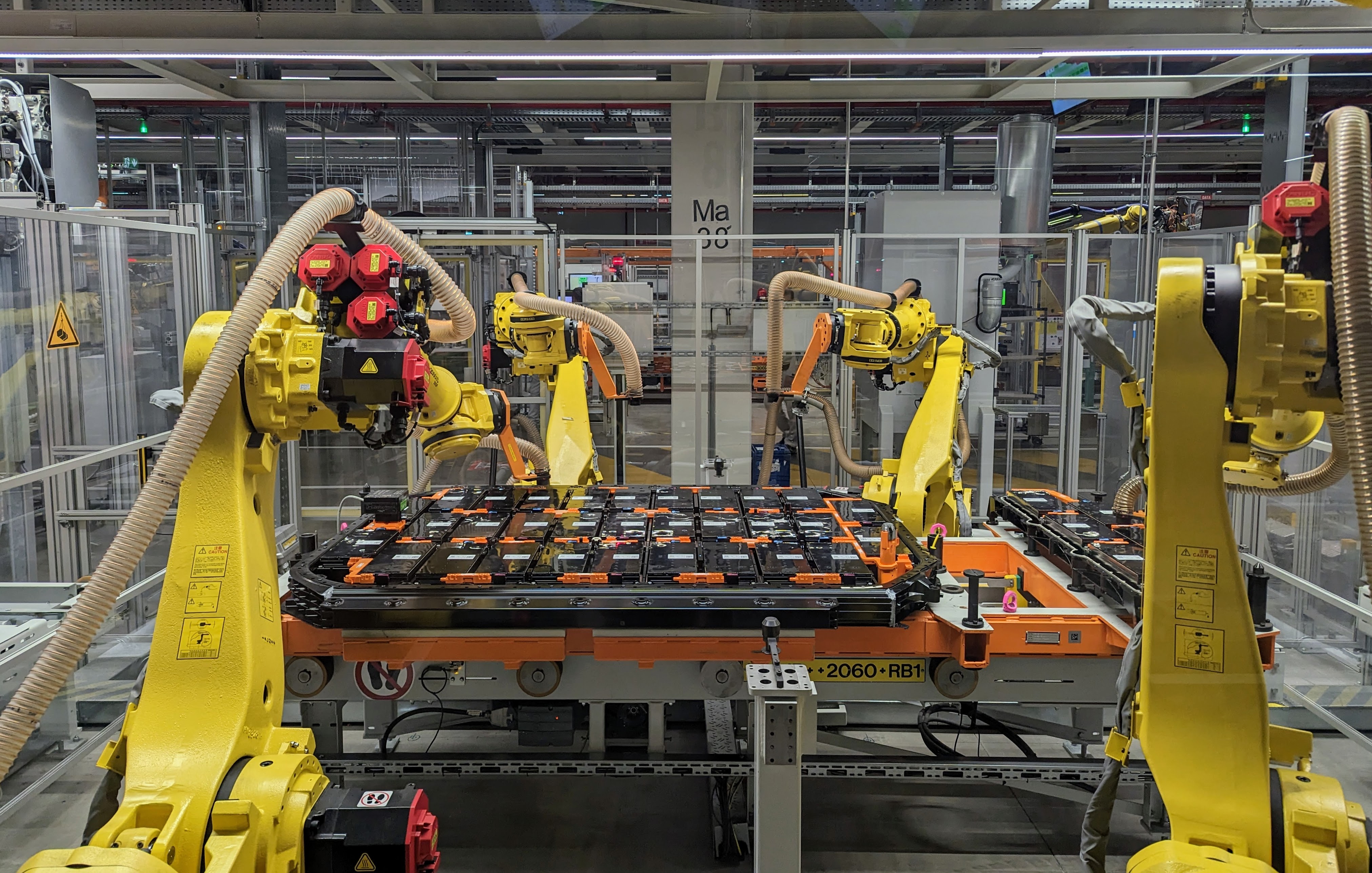 We toured Audi’s first battery pack factory, where 36 battery modules from Audi’s supplier SDI are assembled into the larger 115kWh packs for the Q8 e-tron. Audi employs 100 people per shift at the battery pack assembly facility, with an army of Fanuc robots doing a ton of the heavy lifting of the modules. The facility is highly automated as a means of driving higher quality and more repeatable results. It is an impressive operation and is a true testament to just how much work Audi has put into the design of its battery pack and the production lines churning them out.

Innovation has been woven into the fabric of the culture in Brussels, with improvements being rolled into the production lines on a regular basis. Audi has had four years to optimize production of battery packs and in that time, has cranked out enough volume for 160,000 Audi e-trons. Moving forward, the plant will ramp up to support production of the Q8 e-tron with work already underway to support  production of the Q4 e-tron early next year. Launch for the Q4 e-tron is slated for the middle of 2023 as Audi continues to push forward into the new fully electric future. A Q6 e-tron is also in the works, with Audi leveraging its vast production network to optimize the cost, quality, and schedule of production across its network to support the production ramp. Workers who previously produced combustion vehicles in Audi’s largest facility, in Ingolstadt, Germany, will soon be producing battery packs for the Q6 e-tron. Workers at Audi’s factory in Győr, Hungary who used to produce petrol motors and vehicles will  now produce the electric motors that keep the wheels spinning on Audi’s electric vehicles, transported to Brussels via the existing low emission rail network.

The transformation to a fully electric lineup is important for Audi, as it pivots to align its vehicle offerings with increasing customer demand for battery electric vehicles. Zero emission vehicles are the future at Audi and that concept is carried forward into the plants producing them as well. Audi has set a goal for all of its manufacturing facilities to achieve CO2 neutrality by 2025 and work is already underway at many of its plants to achieve this. 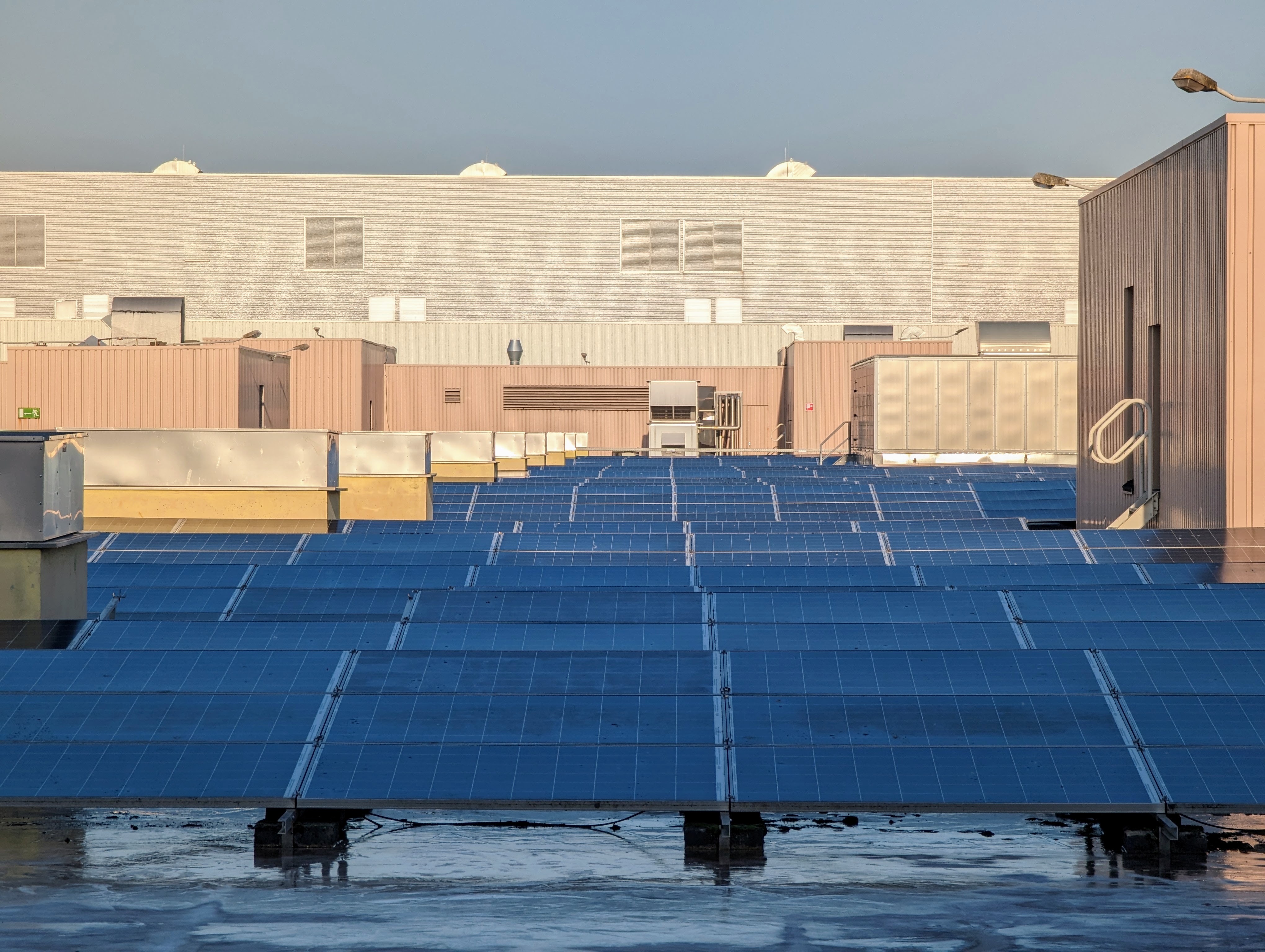 A small section of the expansive solar installation on the roof of Audi’s Brussels factory. Image credit: Kyle Field, CleanTechnica

In Brussels, the vast majority of the roof of the factory has been covered with solar panels. Brussels probably isn’t somewhere you would expect a ton of solar panels to be installed, but even in Brussels, the 9.5MW system cranks out 9,000 MWh of power per year that is directly consumed by the plant. Its factory in Győr, Hungary took the crown as the largest rooftop solar system in Europe at 12MW when it was installed in 2018 and similarly provides power directly to the factory it rests on.

The future is electric and from what we saw at Audi, they have been pushing forward towards that future for years already. The transition to not just battery electric vehicles, but a holistic approach to rebuilding each of Audi’s operations with sustainability in mind. With the addition of the Q8 e-tron and Q8 Sportback e-tron to the family and production of the Q4 e-tron and Q6 e-tron set to ramp up in the coming months, it looks like Audi is getting ready to stomp on the accelerator pedal to blast off into the fully electric future.

Don't want to miss a cleantech story? Sign up for daily news updates from CleanTechnica on email. Or follow us on Google News! Have a tip for CleanTechnica, want to advertise, or want to suggest a guest for our CleanTech Talk podcast? Contact us here.
In this article:Audi, Audi Q8 e-tron