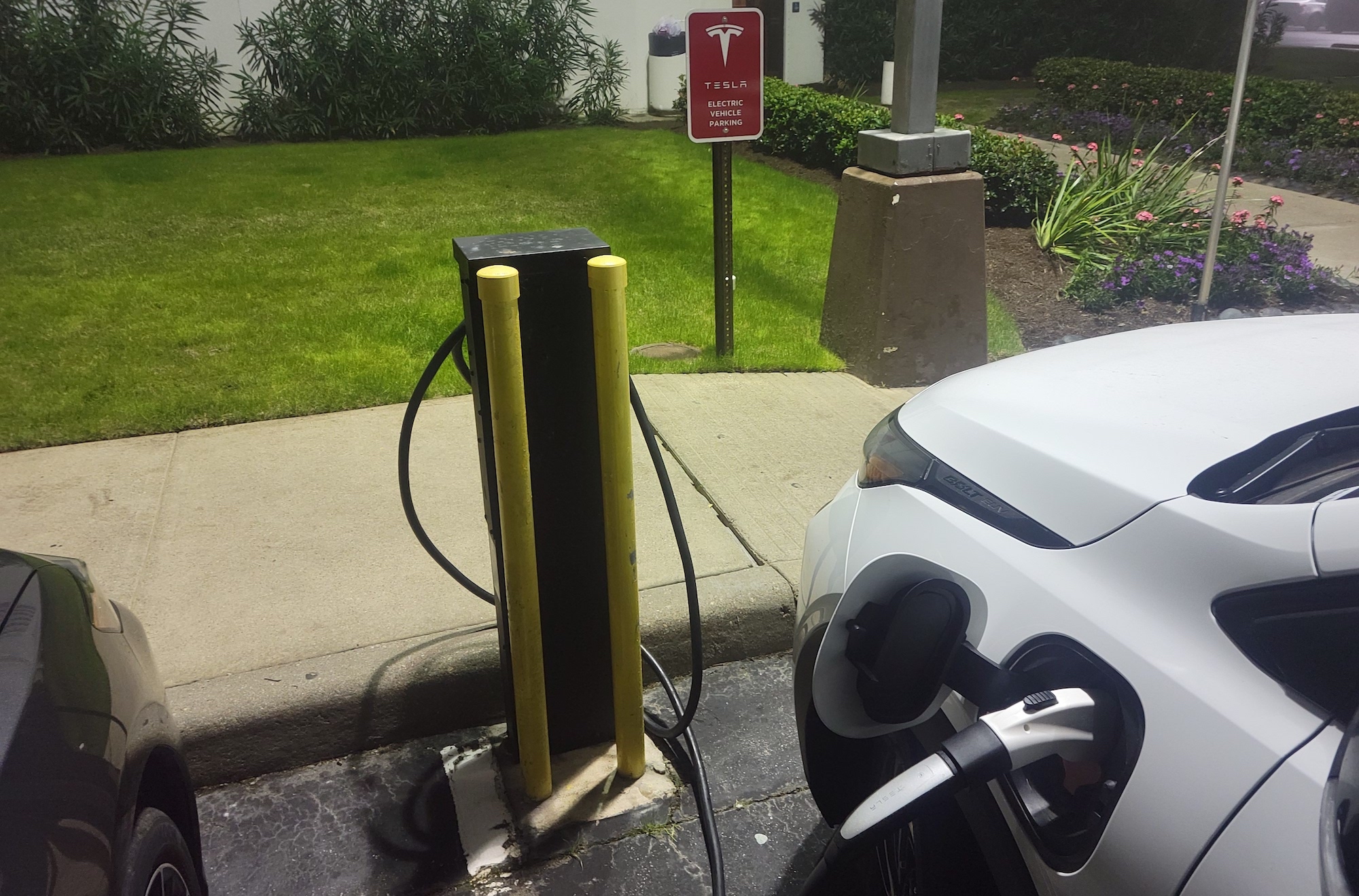 I used to own an EV that just wasn’t suitable for road trips. When we needed to go out of town, we’d almost always take our VW Jetta instead. The car was comfortable (at least in the front seats), had decent highway gas mileage, and was generally decent for trips. But, after I traded the LEAF in for a Bolt EUV, we started taking it on most trips. In fact, we were happy enough with this that we sold the Jetta.

But, when you’re going out of town in a car that doesn’t have the fastest DC fast charging, you still want to minimize the number of stops. With only a 55 kW maximum charging rate, eliminating one charging stop saves at least an hour of time. So, it makes sense to charge the car up at hotels whenever possible, because shifting the charging to time you already need for sleep saves that hour.

Even if you have a much faster charging car, it still makes sense to use Level 2 charging at times. Maybe the hotel charging station is helping you bridge a rural gap in the charging network, or you plan to drive in areas near the hotel where there isn’t fast charging. Plus, even with the fastest of car charging and the best charging networks, it’s just convenient to start your day with a full battery.

Why Such An Adapter Is Even Necessary

Hotel charging has an interesting history. While many hotels have installed J1772 charging on their own or because they got sold on the installation, many others got a leg up on charging through Tesla’s Destination Charging program. Today, Tesla will only help you find an electrician and get the ball rolling, but they used to pay for all or part of the cost of installation. This means that today, many hotels have Tesla Destination Chargers. Who wants to turn something free down?

One thing I’d give Tesla big props for is that it didn’t just put in Tesla chargers. While it mostly put in Tesla plugs, it usually put in at least one Clipper Creek J1772 station for other EVs. This was something Tesla didn’t really have to do, and seems to have been aimed at promoting the overall EV transition instead of just promoting the usefulness of its brand. [Editor’s note: I’m not sure how prevalent this is, but I know some hotels required that the stations be not only for Teslas. —Zach]

But, when you get to a hotel where this happened, it can be pretty precarious in a J1772 car. You could show up to a hotel with one J1772 plug that’s either out of order or occupied by another EV while there’s at least one Tesla plug sitting there doing nothing. This can also happen at restaurants, stores, and other places that have a mix of J1772 plugs and Tesla plugs.

Sure, the Tesla plugs could also be occupied by Teslas, but the chances are fairly low that you’ll find all of both types of plugs occupied. With a Tesla-to-J1772 adapter, you can maximize your chances at getting access to L2 charging away from home. This is basically the same logic as an adapter that does the opposite (J1772 to Tesla).

The Price Was Right

Now that I’ve explained why I would want a Tesla/NACS adapter for my J1772 car, let’s talk about the shopping. Obviously, you’d want to buy the cheapest adapter you can, but you also don’t want to risk fire or just having an adapter that doesn’t work.

So, given availability issues and the high price, I had to go with an alternative (Sorry, Tony). The next-highest rated adapter I could find was the Lectron 48-amp compact adapter. Unlike the JDapter, it doesn’t have any cable, and it’s roughly the size of a Star Trek: The Next Generation era phaser. In fact, my kids were running around the house playing Star Trek with the thing once it came in. This included an unplanned “deck check” onto a hard floor — the unit isn’t fragile at all.

When I bought it, the price was about $150 on Amazon, which is obviously a lot cheaper than $338. Plus, it was in stock and ready to ship. Like anything related to charging, you probably want a fairly boring experience. If things get interesting when you’re plugging a car in, something probably went wrong. Ideally, you plug a car in and forget about it until you need the car again.

That’s pretty much the experience I had with the Lectron adapter. At the hotel, I plugged the Tesla destination charger into the adapter, plugged the adapter into the car, and the car charged just like it always does. I left the car charging for a few hours until full, and then unplugged it and moved so somebody else would have a chance to charge up.

Something For Superchargers Sure Would Be Nice

For this article, I was tempted to do something dumb and try to plug in at a Supercharger. There was even one next to a hotel I stayed at later in the trip and nobody was around. But, alas, I was too busy to get a dumb picture of the Lectron adapter not working at a Supercharger. (Lectron says in multiple places this wouldn’t work.)

That said, I do know that Lectron has its hands in non-Tesla EV charging that will happen at Superchargers. When Aptera put out an official announcement about adopting Tesla’s NACS standard, it also announced that Lectron was going to supply the connector and the charging equipment for the vehicle. This probably means that Lectron knows enough to get a non-Tesla vehicle to work at a Supercharger (once Tesla opens that up, of course).

So, while I know that this isn’t entirely in Lectron’s hands, I do have to say that it sure would be nice to charge my Bolt at the occasional Supercharger!

Don't want to miss a cleantech story? Sign up for daily news updates from CleanTechnica on email. Or follow us on Google News! Have a tip for CleanTechnica, want to advertise, or want to suggest a guest for our CleanTech Talk podcast? Contact us here.
In this article:Lectron, Tesla, Tesla adapter