Tesla held its long awaited ceremony to introduce its electric Class 8 tractor, known simply as the Tesla Semi, on December 1. If you weren’t able to watch the livestream of the event, there is a video of it below. In it, you will see Elon Musk drive a white Semi on stage followed by two others decked out in Pepsi and Frito-Lay livery.

PepsiCo was the first to step up to the plate and order 100 of the groundbreaking battery electric tractors many years ago. There’s more to the story and we will get to that in a moment. But first, here’s more about the Tesla Semi from yesterday’s event. Musk said the Semi uses three electric motors that are based on the ones in the Plaid-spec Model S and Model X. One will be used for steady-speed driving on the highway to obtain maximum efficiency, while the other two motors engage when maximum torque is required to accelerate or maintain speed while driving uphill. Elon said that just one of those three motors alone is “more powerful than the diesel engine on a semi truck.” To clarify, the Associated Press notes that the drive unit in a Tesla Model S Plaid has an output of 1,020 horsepower and 1,050 pound-feet of torque. By comparison, a typical diesel engine in a Class 8 tractor has about 600 horsepower and between 1,000 and 2,000 pound-feet of torque. A video clip shown during the event showed the truck pulling up a 6% grade on the way to the Donner Pass while passing traffic. Look for it at around the 38 minute mark. The video also has some cool shots of the Semi’s mechanical components. Musk enthused about how regenerative braking can keep the truck’s speed in check while going downhill and help avoid the risk of a runaway 80,000 lb truck hurtling down a steep grade if the brakes fail. Musk called is “a significant safety improvement for the truck driver and the other people on the road.”

The Tesla Semi has a range of 500 miles (800 km) when pulling an 82,000-pound (37,000-kilo) load. The normal load limit for a semi is 80,000 pounds, but Musk said an extra 2,000 pounds is allowed for an electric truck. He added that the company successfully completed a 500 mile range test of the Semi between Fremont and San Diego, California, on November 15. Tesla says it plans to ramp up Semi production to make 50,000 trucks by 2024 and will use the trucks in its own supply chain to ship auto components. Charging The Tesla Semi — And The Cybertruck

Charging the Tesla Semi will require a lot of electrons. Tesla has developed what it calls a “megawatt-class” V4 DC Supercharger that’s “next-generation liquid-cooled,” allowing a user to “shove a megawatt” through a typically sized charging cable. At the delivery event, the company said it would begin installing V4 chargers at Supercharger locations next year. Then Musk dropped this bomb: “It’s going to be used for Cybertruck, too.” Oh, my.

Then there’s this little tidbit. Tesla said its other vehicles would use the powertrain in the Semi. Wait, what? Which other vehicles? The Cybertruck seems like the most likely candidate, but there’s no official word on that. The Roadster 2.0 maybe? A van or shuttle aimed at robotaxi service (if that’s ever possible)? We don’t know, and based on past experience, it will be three to five years before we find out. When Tesla first presented the Semi to the world in November of 2017,  Musk said production would begin in 2019 and the trucks would be able to follow each other autonomously in a convoy. But during Tesla’s third-quarter earnings conference call in October, he said the company’s “Full Self Driving” system is not quite ready to be driverless. “It’s been a long journey, a long five years,” Musk said, “but this is going to really revolutionize the roads.”

Let’s be clear. There is an enormous difference between several trucks platooning on the highway and a truck that can navigate city streets with cross traffic, stop lights, pedestrians, and bicyclists present. The first is more about connected driving using AI and sensors. Platooning reduces wind resistance by allowing two of more trucks to travel within inches of each other. It also might allow following vehicles to operate without human drivers, which would save trucking companies money.

The downside to platooning is some drivers could find themselves blocked from being able to exit a highway or enter a service area if there is a solid wall of 10 trucks plodding along in the right lane. It’s an idea that seems appealing on the surface but may create new driving challenges that will need to be addressed.

The fact that PepsiCo is the first company to take delivery of a Tesla Semi is due in large part to support for zero emissions trucking from the State of California and its Air Resources Board. As Bloomberg (email) pointed out recently, PepsiCo has a large distribution center in Modesto, California. CARB put up $15.4 million — one half of the total — to encourage it to transition that facility to low-emissions vehicles. The result is a modernization program that includes solar panels and battery storage as well as 15 Tesla Semi trucks, six Peterbilt electric trucks, three BYD electric yard trucks, 12 electric forklifts, and 38 low-emission Volvo tractors.

Bloomberg suggests that the decision to hold a “delivery event” in Reno rather than in Modesto was deliberate on Musk’s part. Far be it for us to try to guess what goes on inside his head, but his antipathy toward California is palpable. Musk has shown he is capable of being petty and mean spirited. It would not be surprising if he went out of his way to snub California just out of spite.

Editor’s note: The Tesla Semi has been produced in Tesla’s first gigafactory in Nevada — the first (and only) vehicle to be produced there. I think it’s only natural — expected even — that Tesla would hold its launch event in Nevada. Further, as noted at the beginning of the event, the attendees got to tour the production line. I’ve got plenty of issues with incorrect information and conspiracy theories Elon Musk has been pushing, but I don’t think there’s anything untoward going on here. —Zach Shahan The number of heavy-duty trucks on the road is small compared to the number of passenger cars and light trucks. Yet these beasts that crisscross America hauling cargo account for 20% of greenhouse gas emissions from the transportation sector and 33% of particulates. Musk pooh-poohs the idea of hydrogen fuel cell powered trucks, but others think there may be room for them as part of the transition to clean-running heavy-duty trucks that deliver the goods America needs without contributing to a warming planet.

The Tesla Semi may in fact represent a watershed moment, but other companies such as Mack, Freightliner, Volvo, and Peterbilt are also heavily invested in bringing zero-emission trucks to market. Dave Mullaney, a trucking electrification expert at RMI, tells Canary Media, “[The Tesla Semi] is the only electric truck that we’ve seen that was designed to be an electric truck.” Other semi truck makers are modifying existing machines to make them electric, he said, ​“but they’re not engineered from the ground up to be electric. And this is where Tesla is really different. This was built to be an electric truck from the start, and that changes how you design these things.” 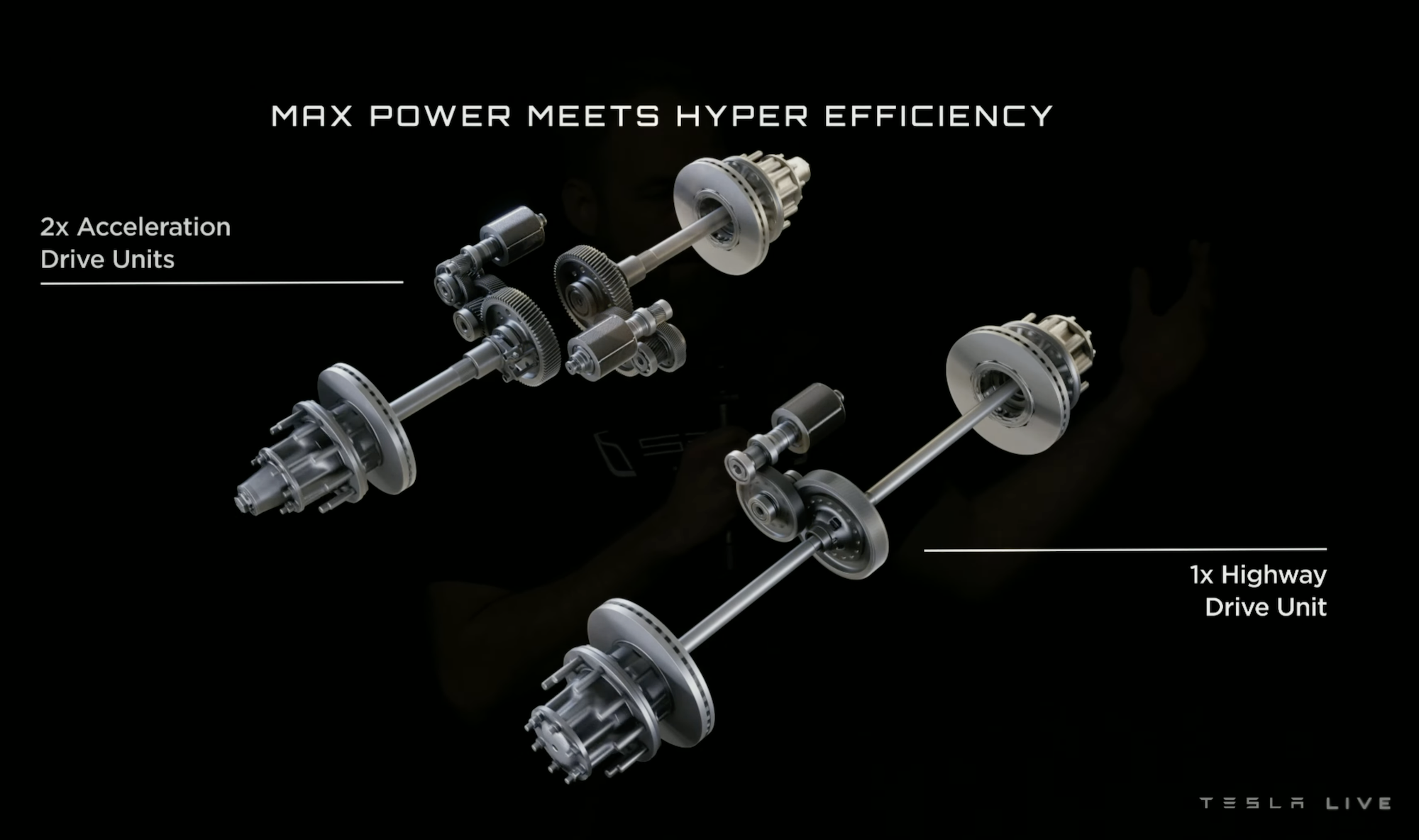 “This is a pivotal moment for the electric truck industry. If we get an EV company that understands battery management — understands how to build an electric vehicle from the ground up — and applies this to trucks, then this is a bellwether for the long-term future of electric trucks.”

What thoughts do you have on the Tesla Semi and its launch event?