Electric vertical takeoff and landing (eVTOL) aircraft have been all the rage for a few years, but what about good old helicopters? Naturally, conventional helicopters are powered by fossil fuels, but they can be electric too. One converted electric helicopter is eager to go on an epic journey to show the potential there, and for now it has demonstrated that potential on a small scale on a record flight. The helicopter was a third-generation e-R44 fully electric conversion of the popular Robinson R44 helicopter. It was reportedly the first electric helicopter to go from one city to another or from one airport to another. This electric helicopter flew along the Coachella Valley of California from Jacqueline Cochran Airport (KTRM) to Palm Springs International Airport (KPSP). That’s 24 miles (39 kilometers), which took 20 minutes to cover.

The pilots on this historic flight were Ric Webb, CEO of OC Helicopters, and Dr. Martine Rothblatt, CEO of United Therapeutics. They also loaded the helicopter with 50 pounds (23 kilograms) of faux storage in order to “simulate a transplant organ care system in the rear cabin,” as Vertical writes. 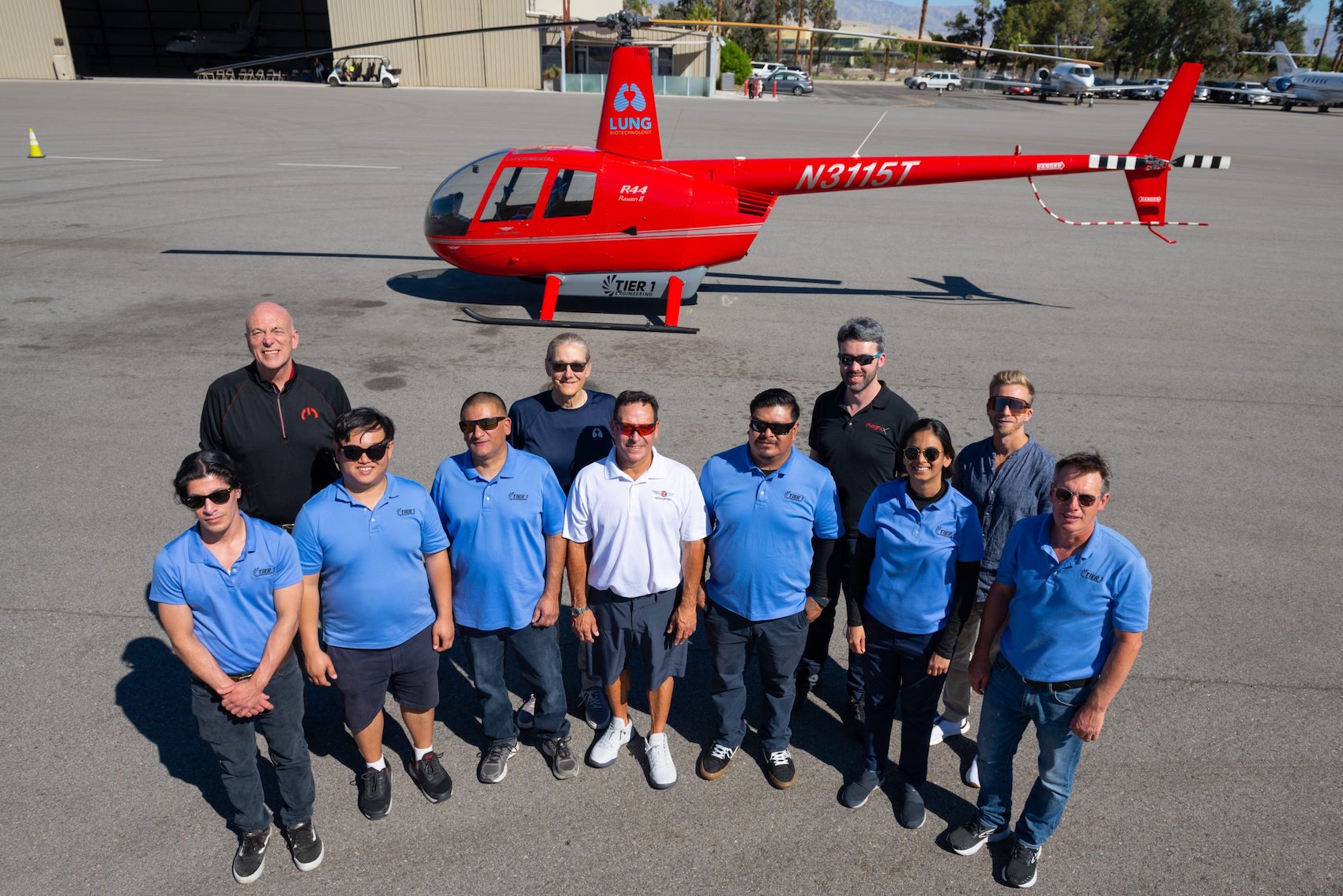 “The team behind the e-R44’s landmark flight stands alongside the aircraft.” Credit: Dan Megna Photo

Tier 1 Engineering and Lung Biotechnology PBC enabled and sponsored this flight. Tier 1 Engineering has been working on electric helicopters and setting records in this segment for years. Tier 1 Engineering President Glen Dromgoole says that the e-R44 electric helicopter had 50% of battery state of charge when it completed its airport-to-airport flight. “We believe we’re developing a really practical solution for short duration rotorcraft flights such as organ deliveries, pilot training, scenic tours and other inner-city trips,” Dromgoole added. “Martine Rothblatt and Ric Webb stand in front of the ‘Hero Wall’ that they signed at Atlantic Aviation FBO after their arrival at Palm Springs Airport.” Credit: Timothy Wheeler Photo

“An accomplished fixed-wing and helicopter pilot, Rothblatt started researching the feasibility of electric vertical flight about six years ago and shared the specifications of zero-emissions electric rotorcraft with a number of aerospace companies to launch a research project,” Vertical notes, adding that Rothblatt started researching the potential for electric helicopters about 6 years ago, which would be around the time that the Tesla Model 3 was revealed. “Dromgoole was the first person to positively respond to Rothblatt’s line of inquiry. Tier 1 Engineering received a contract in early 2016 to rapidly build and fly a proof-of-concept electric helicopter.” “Ric Webb, Martine Rothblatt and Glen Dromgoole stand in front of the e-R44 after their arrival in Palm Springs.” Credit: Dan Megna Photo

Don't want to miss a cleantech story? Sign up for daily news updates from CleanTechnica on email. Or follow us on Google News! Have a tip for CleanTechnica, want to advertise, or want to suggest a guest for our CleanTech Talk podcast? Contact us here.
In this article:electric aircraft, electric helicopters