What’s the longest you have driven in one go? How about in an electric car? Our team hit their record distance returning from the Balkan experience during our annual EV quest across Europe. Not that they planned it that way, but in the end, it was a thrilling adventure. We left off when the Kona Electric arrived in Dubrovnik, the Croatian jewel with its magnificent city walls (plan a walk along them, but not at noon in the summer).

Our fully charged and energetic Kona headed north. After about an hour drive, we came to a lovely small town — Ston, with impressive medieval defensive walls guarding … an empty hill. As absurd as it looks, it probably helped the walls survive almost intact until today, since nobody was interested in scaling them. Today you can take a stroll along the wall, which stretches 5 km and is the longest existing defensive wall in Europe. For us, though, it was more important to enjoy a nice breakfast in the town at the foot of the mountain with a free AC charger in the car park (“parking lot” for Americans). Free energy is the best complement to your breakfast, isn’t it? What’s the next item on the agenda? The Peljesac Bridge — opened only in July, 2.4 km long, cost a mere €500 million, lets you bypass Bosnia and Hercegovina (which I would normally recommend seeing), and saves you time on border crossing. Our team was heading for Split and the Diocletian’s Palace, with a free charger right next to it. The attraction is spectacular and this viewpoint was shared by many other tourists with electric vehicles, so there was a long queue at the charger. No stress, though, as Croatia has fast chargers at virtually every petrol station along the motorway. That is actually the case along most of the way home, until Poland, which, I’m sorry to say, falls behind Austria, Croatia, and Slovenia. We still have some catching up to do. 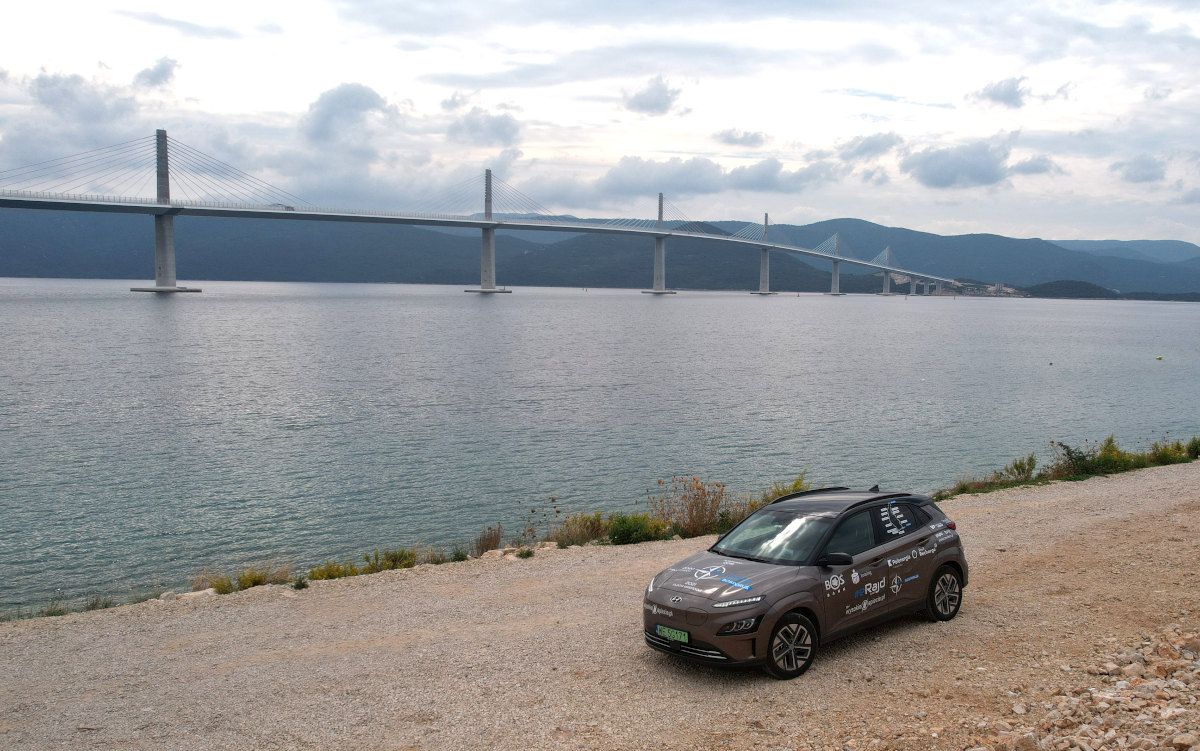 Near the Peljesac Bridge. (Photo courtesy of WysokieNapiecie.pl)

Charging is not always smooth. The Zadar charging station from Ionity looked impressive, with four ABB chargers of 350 kW power capacity each. Why would they charge at 30 kW, then? The team tried all of them and one finally kicked in and allowed what the Kona could take in — 75 kW. After 40 minutes, our Kona was good to go, and that was one of very few charging stops over this two-week journey where passengers had to wait for the car, not the other way round. That’s the price you pay for having a slower charging vehicle. In the case of the Hyundai IONIQ 5, which charges three times as fast, the stop would take 15–20 minutes.

The hotel stay that never happened

It becomes a more pressing issue when you land at a charger at night when the station or restaurants around are closed, as was the case in Zagreb. The charger worked nicely and was easily initiated with the Shell card, but the difference in experiencing night charging became even clearer at a petrol station in Slovenia, open and offering a warm and cosy welcome. You can’t have everything your way, can you? And that is what the team soon learned the hard way when they arrived at a hotel in Austria located at a petrol station along the motorway. It turned out that the petrol station and the nearby hotel were both closed when Kona arrived, while according to what it said on Booking.com, the keys to the hotel room were supposed to be collected at the petrol station. Could a “We’re hiring” sign on the station’s door have anything to do with it? Maybe, hard to say 100%. It didn’t say “we’re hiring” on the booking ad, sadly. Quick night check, no decently priced hotels around, quick brainstorming session, options on the table, SWOT analysis done, 5WHYs performed and the computer spat out the answer: let’s drive home and have a nap in the car on the way.

Kona ready for the night drive. (Photo courtesy of WysokieNapiecie.pl)

Well, needless to say, it wasn’t a dream scenario, especially after a beautiful day in Dalmatia. The team are big boys, though, and big boys don’t cry. The next charging station, an Ionity station in Austria, was used for a longer nap — 90 minutes later, the Kona was almost fully charged and the drivers felt fully recharged.

They drove 300 more km, charged in Czechia, and then had a change of drivers (the current one had enough). A couple of hours later, the Kona was back in Poland and the team deserved a good breakfast plus charging at a 180kW Noxo station. Then another Noxo station on the A1 motorway, a Noxo again. They started well with the Shell card — roaming rocks and all EV users are grateful for that. At 3:00pm, the Kona was back in Warsaw where it started after driving over 5,000 km — 1,700 of which in one go at the end. What a record! Round trip of 3,230 miles in Kona Electric. (Photo courtesy of WysokieNapiecie.pl)

Conclusions must be drawn

During the first trip in 2018 to the northernmost point of Europe — Nord Kapp — in a Nissan LEAF, the infrastructure was incredibly poor and we reached the target kind of miraculously. We’re talking about one of the richest countries in the world, Norway, which had been investing in e-mobility for a decade by then — and the charging network in the far north was insufficient to allow a comfortable, stress-free, EV journey. This year, driving around the Balkans and through one of the poorest European countries and regions, we had no such problems. That is the best evidence e-mobility is accelerating.

A second and upsetting conclusion is that Poland is lagging behind all other EU countries in terms of charging infrastructure. When it comes to both the quantity of stations and their charging power, all other countries look better off, including poorer states such as Romania and Bulgaria. I shudder to think how bad it would have been had we not been rescued by GreenWay, the largest Polish operator from Slovakia (thank you, Peter). We’re on top of Albania and Montenegro, but for how long?

Thirdly, and most importantly, you can travel and charge around Europe using one card. In our case, it was Shell Card EV. What a nightmare it was when we travelled across Europe before — multiple cards, apps, and fake identities. Portugal is probably the most extreme with well located fast chargers … but from many different operators. Each operator had their own app, and to register, you needed a Portuguese address! … Today, a company employee can go on an EV business trip with one card to use over 300,000 charging points across Europe, pay for road tolls, carwashes, etc. and be invoiced for it all at the end. That process is unstoppable now.

The final note is on charging costs. No kidding here — it has gotten more expensive following the Russian invasion of Ukraine and the energy crisis it triggered. Although energy prices have stabilized now and are coming down, the earlier spikes are now seen in charging rates across Europe. In some places in the south of Europe, the rate per kWh could reach as much as €0.61/kWh, and the record-breaking hotel in Albania where the rate per kWh reached €0.82/kWh. Compared to the Polish average of €0.41/kWh, you can see Poland has the lowest rates in Europe today (hard to say how much longer, as we’re on track for a more serious energy crisis). On the other hand, fuel prices in Europe have gone crazy in recent months, too. Let’s compare, then, what it cost the Kona Electric to go 100 km and what it would cost a regular ICE Kona to do the same.

Our average spend along the entire trip was €0.41/kWh. So, with Kona’s average consumption of 15.6 kWh/100 km, that amounts to €6.40. The estimated fuel average along the roads of southern Europe would be €1.64, so driving 100 km would cost us almost twice as much. Let’s say it again: can’t complain, can you? If you go hunting for free chargers along your way, you can go even lower, something you can’t practice in your combustion engine vehicle (at least not legally).

There is no going back from the electrification of transport. Despite the global economic slowdown, the number of EV registrations is higher year over year in Poland in all segments, including vans and trucks. Incentive programs are either in operation or planned to be launched in most European states, so we may expect further growth across all markets. From our Polish perspective, it’s critical to catch up in the development of charging infrastructure to make sure this last argument of EV sceptics becomes ungrounded.

Don't want to miss a cleantech story? Sign up for daily news updates from CleanTechnica on email. Or follow us on Google News! Have a tip for CleanTechnica, want to advertise, or want to suggest a guest for our CleanTech Talk podcast? Contact us here.
In this article:croatia, EV road trips, Hyundai Kona EV, Poland