We all know that fossil fuels create carbon dioxide when burned, but they also create something called fine particulate matter — little itty-bitty particles less than 2.5 microns in size. A micron, in case you don’t know, is one millionth of a meter.

Fine particulate matter (FPM) is so small, it can cross directly into the bloodstream in the lungs and then get circulated to all the organs in our bodies including our brains. Research shows FPM can lead to cardiovascular and pulmonary disease as well as diminished brain development in young humans. They have been detected in human placentas, which should give us all pause. Recently, Emissions Analytics conducted a study that showed fine particulates from tire wear are 1,850 times greater than those found in the exhaust stream of an internal combustion engine.

This is bad news for electric car advocates, who were saddened to learn that, because battery electric cars are heavier than conventional cars, tire wear and therefore the amount of FPM left behind while driving is higher as well. Oh dear. Another arrow in the quiver of those who like to complain that electric cars aren’t as “green” as they are supposed to be. What these nattering ninnies miss is that all tires shed FPM, so it’s not like those big knobbly tires on their jacked up Stupid Duty pickup trucks are somehow free of sin.

The study also found that brake pads shed FPMs as they wear as well. Since most EVs use regenerative braking, the electric car crowd can legitimately claim the moral high ground on FPM from brake wear and point out the brakes in a conventional car spew out more of them than an EV does.

Vacuuming Up Fine Particulates As You Drive 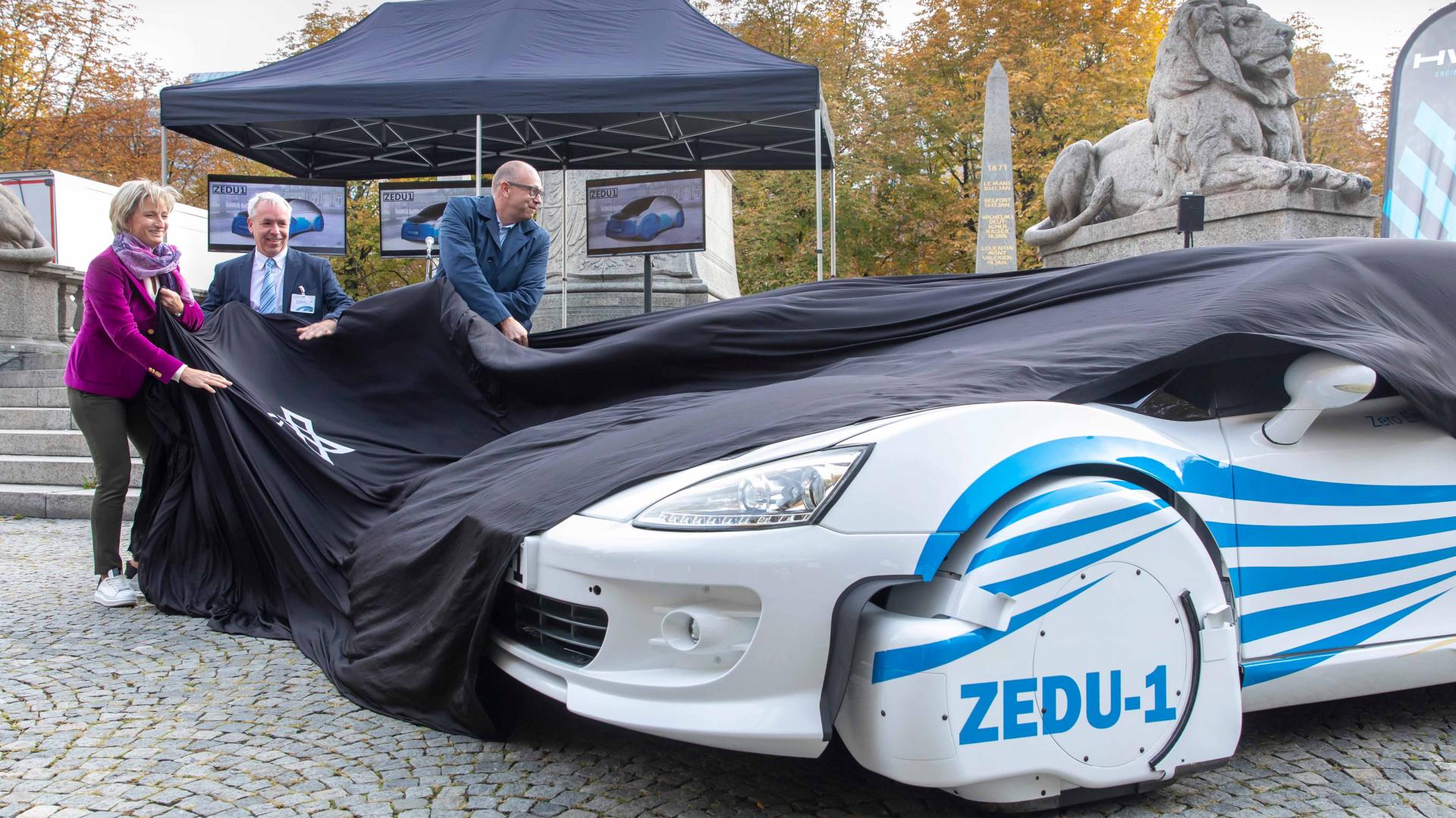 The German Aerospace Center, known as DLR, has taken the issue of fine particulates to heart and decided to do something about this scourge. Together with German automotive company HWA, it developed a prototype car that literally vacuums up almost all the FPM created by a car’s tires and brakes and deposits them in catchment container that can be emptied from time to time.

Called the Zero Emission Drive Unit – Generation 1 — ZEDU-1 for short — the prototype EV has been successfully road tested and found to be virtually emissions free, which makes it the most environmentally friendly road vehicle in operation in the world.

“For us, people’s health and an unpolluted environment are paramount. The ZEDU-1 project concentrates on the components that have so far received little attention and are now gradually being regulated in terms of emissions by the EU Commission through legislative measures — namely brakes and tires. With the prototype ZEDU-1 presented today, we are showing solutions for how we can be on the road in the future with virtually no emissions. Our concept is highly efficient, extremely compact, suitable for everyday use and versatile. It can be transferred directly to future cars and commercial vehicles,” said Prof. Tjark Siefkes, Director of the DLR Institute for Vehicle Concepts in Stuttgart.

“I am pleased that the research project Zero Emission Drive Unit – Generation 1 has successfully developed a prototype that tackles particulate matter emissions as the most important causes of mobility-related environmental pollution and thus lays the foundation for almost emission-free mobility on the road in the future. With the result of the research project worth six million euros, our industry now has a first-class template for transferring the technologies to series production and further significantly reducing the abrasion of future vehicles,” explained Dr. Nicole Hoffmeister-Kraut, the Baden-Württemberg minister of economic affairs. Her state contributed €6 million to the project.

After first tests of the ZEDU-1 were completed, the DLR reported that is was able to capture and sequester 100% of fine particulates and microplastics caused by brake wear and by tire wear up to 50 km/h. Above that speed, the system was able to reduce FPM pollution from tire wear by 70 to 80%. The next step is to further develop the technology, together with industry partners, to make it ready for series production.

Abrasion from tires on the roads is responsible for more than a quarter of microplastic emissions worldwide. When it rains, the small particles get into the sewage system and thus into the water cycle. In Germany alone, that’s around 110,000 tons a year. Brake discs and brake pads also wear off when braking.

There is a tendency to smile when reading about projects like this. The Emissions Analytics study sent shock waves through the automotive industry and particularly annoyed EV advocates, who felt the research had to have been financed by the fossil fuel industry in order to generate more fear, uncertainty and doubt about the EV revolution.

But in fact, fine particulates are a serious threat to human health and are not to be taken lightly. It’s hard to imagine cars actually driving around wearing spats to solve the FPM problem. Frankly, the system looks ridiculous. But cars once had tail fins, Bangle butts, quad headlights, and cruiser skirts. So never say never. Tastes change and so do government regulations. At least now if you see a car with fully enclosed wheel wells, you will know it’s not because aliens have landed.

Don't want to miss a cleantech story? Sign up for daily news updates from CleanTechnica on email. Or follow us on Google News! Have a tip for CleanTechnica, want to advertise, or want to suggest a guest for our CleanTech Talk podcast? Contact us here.
In this article:fine particulate matter We Can Eliminate Millions Of Air Pollution Deaths

For decades, major oil companies have known about the health risks from fine particulates but worked diligently to keep that knowledge secret.