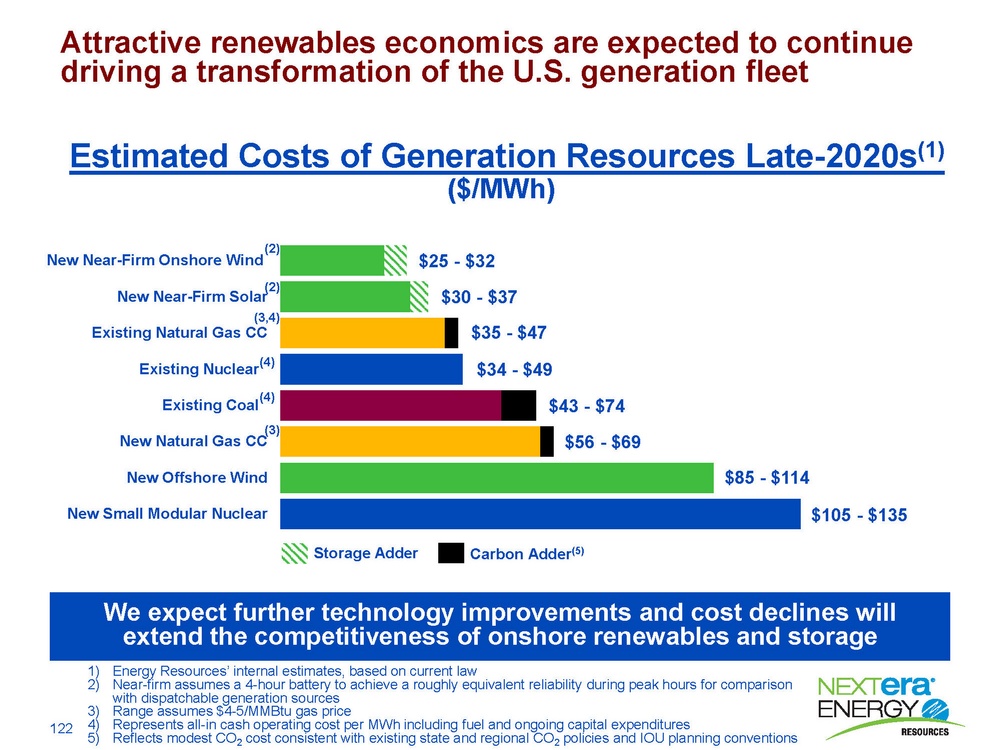 There were a couple of interesting developments in June in regards to electric power. One was that NextEra Energy issued its Investor Conference Report 2022 to its stockholders. Another was a paper from Stanford University, “Low-cost solutions to global warming, air pollution, and energy insecurity for 145 countries,” (LCS study) by Mark Z. Jacobson, et al. Looking into them is rather interesting.

The first of these makes very clear that in the opinions of the people running NextEra Energy, combustion generating sources and nuclear power are getting too expensive. Furthermore, their opinion is that the most expensive of these, at least in the late 2020s, will be small modular nuclear reactors (SMRs). The above chart, from their investor report, shows this.

A couple of things stand out because of their explicit statements in the chart. One is, “Attractive renewables economics are expected to continue driving a transformation of the U.S. generation fleet.” The other says, “We expect further technology improvements and cost declines will extend the competitiveness of onshore renewables and storage.

We should make clear, just in case anyone doesn’t know, that NextEra is hardly anti-nuclear. While it is already the biggest investor in renewable energy in the US, it does own seven nuclear reactors, including the one at Seabrook.

One thing to make note of in the chart is that the term “near-firm,” applied to wind and solar power. It means that those power sources are backed up by a four-hour battery, which NextEra regards as sufficient to make the renewable power sources roughly equivalent to dispatchable sources during peak hours. Another thing is that the storage adder is seen to raise the costs of solar and wind power by about 0.5¢/kWh. This is represented in the chart by the shaded areas on the bars for solar and wind power.

Another thing to note is that in this chart, electricity from new, near-firm solar and wind plants is a good deal less expensive than electricity from existing nuclear plants. Let’s state this clearly: We are paying extra for electricity from nuclear plants, even after they have been paid down, and even though the sun can shine and the wind can blow almost all the time, because of really cheap battery storage. Put another way, it would be cheaper to close the nuclear plants and replace them with new renewable facilities.

When we compare near-firm wind and solar in this chart to SMRs, the advantage of renewable energy is even more impressive. NextEra clearly expects SMRs to generate electricity that costs anywhere from three to five times as much as the near-firm renewables.

Aside from the fact that it is not possible to do everything all at once, there really is no excuse for this. Near-firm renewables may not be perfect, but we can be certain that SMRs will not be perfect either, and we don’t know what types of failure they will experience. It is true that some SMRs are designed to follow changes in demand, but the changes will take time and that makes them very inferior to near-firm renewables, which can change within less than the time of a single cycle of AC power. We should note that even if SMRs really cannot melt down (a premise we should not accept on its face value) they produce a lot of waste, reportedly much more than existing plants, and that waste is a serious problem.

Our conclusion should be that SMRs are very inferior to near-firm renewables in just about every respect.

We should turn to the LCS study. As an academic project, it is based on existing data, modeling, and computations. To give an idea of what that means, we might list some of the steps taken for one portion of the study. It breaks the world into 28 regions, and for each region models the weather that can be expected over a three year period starting in 2050. This is done for different scenarios for generating and using electricity. Energy usage for each region is recalculated for intervals of 30 seconds for the entire three years. That is a lot of computing.

The LCS study does show an analysis based on business-as-usual. But for the renewables section of the study, it does not examine the use of nuclear energy for several reasons. One is that nuclear power produces waste that will be toxic for the foreseeable future and then some. Another is that it is inherently dangers in multiple ways. But of interest here, nuclear power is not built into the energy mix for renewables partly because it is so expensive that it gets in the way of implementing wind, water, and solar power, slowing down our transition away from fossil fuels.

So the bottom line is a question: Why should we pay extra for nuclear energy?

This article was originally posted to the website of the New England Coalition on Nuclear Pollution and is in the public domain. The positions of the Governor of Virginia on nuclear power and renewable energy make it relevant for today. To the extent possible under law, George Harvey has waived all copyright and related or neighboring rights to Why Should We Pay Extra for Nuclear Power? This work is published from: United States.

Don't want to miss a cleantech story? Sign up for daily news updates from CleanTechnica on email. Or follow us on Google News! Have a tip for CleanTechnica, want to advertise, or want to suggest a guest for our CleanTech Talk podcast? Contact us here.
In this article:Batteries, costs, Mark Z. Jacobson, NextEra Energy, nuclear, Renewable Energy, solar, Wind