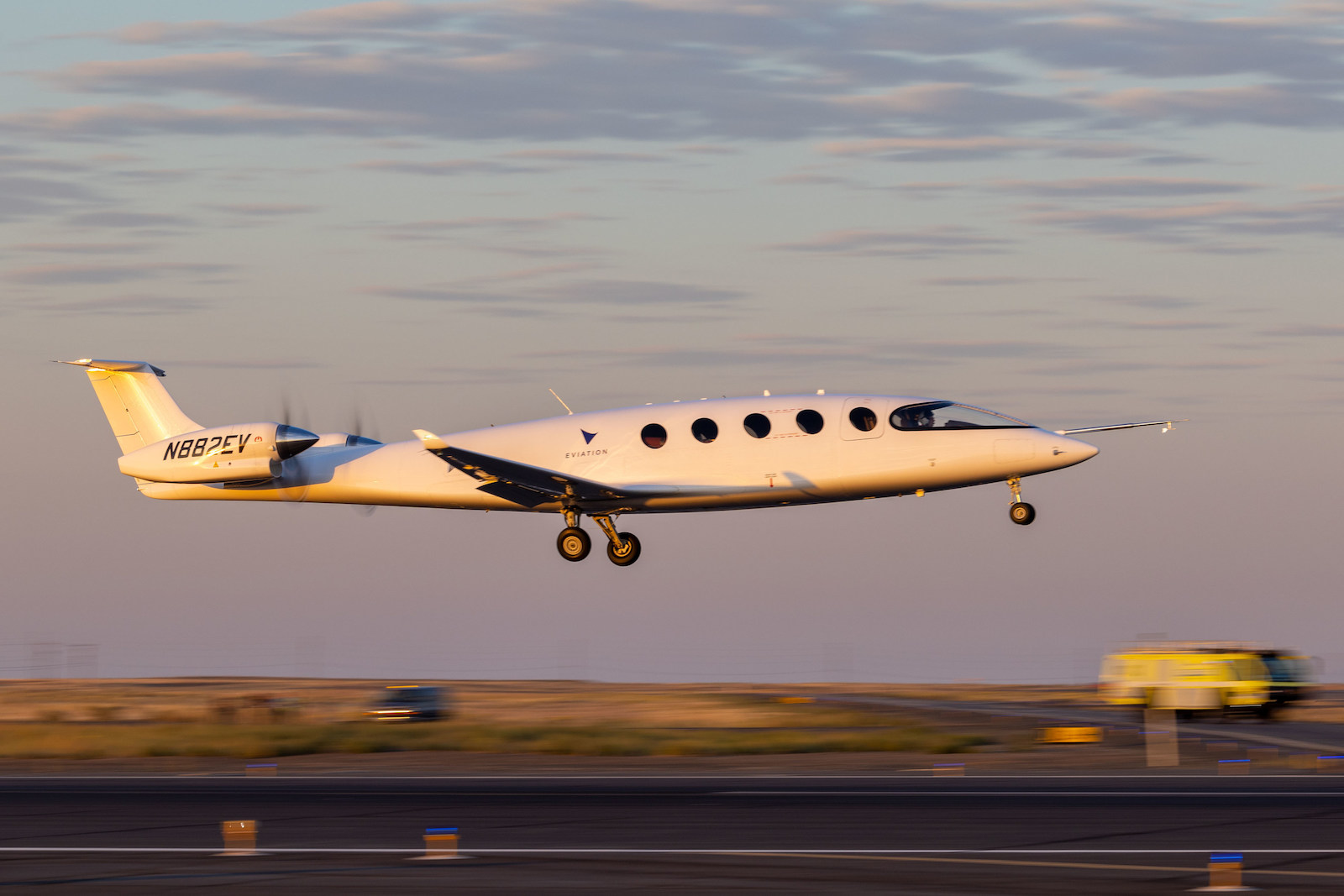 Electric aircraft have been slow to take flight, but a new burst of momentum is brewing as the firm Eviation launches its Alice zero emission aircraft into the air (photo courtesy of Eviation).

Members of the driving public are becoming used to the idea that battery-powered cars are just as reliable as their gasmobile cousins, but getting people to board an electric aircraft is a more challenging matter. Still, the field of zero emission flight is becoming crowded with startups that are determined to give it a try, and the company Eviation is convinced that its new Alice electric passenger airplane fits the bill.

Eviation first crossed the CleanTechnica radar back in 2017, when we took note of the company’s “blank slate” zero emission engineering model and the eye-catching futuristic silhouette of its signature Alice, which comes in 9-seat and 6-seat passenger versions. It also caught the eye of DHL, which ordered 12 cargo versions of the aircraft back in August 2021 (see our complete coverage of Eviation here).

It’s been a long wait, but earlier this week Eviation was finally ready to give Alice a public sendoff.

The successful first flight took place Wednesday morning, at the Grant County International Airport in the state of Washington. The flight only lasted a total of 8 minutes, but that was long enough for the aircraft to put its electric propulsion system through its paces at peak altitude of 3,500 feet. Eviation will use data from the flight to fine tune the aircraft’s systems for the commercial market.

Those of you who remember the days of People Express know that at one time, it was possible to market air travel as a more convenient and less expensive alternative to ground travel. The airline company’s ultra-cheap flights were the stuff of legend until it merged with Continental back in 1987.

We’ll probably never see a return to those days, but Eviation foresees that electric aircraft could help help make air travel more affordable, in addition to zeroing out emissions related to airborne mobility.

“People now know what affordable, clean and sustainable aviation looks and sounds like for the first time in a fixed-wing, all-electric aircraft,” said Eviation President and CEO Gregory Davis in a press release describing the first flight of Alice.

That thing about affordability may sound counterintuitive. After all, the up-front price of a typical electric vehicle is still higher than its gasmobile counterpart, mainly on account of the battery pack.

However, in the area of regional travel, the cost of air travel is related to access to local airports and restrictions on the use of airports, including time-of-day restrictions. That is where Eviation anticipates a strong advantage for electric aircraft.

“All-electric aircraft will make regional travel more economically and environmentally sustainable for businesses and consumers,” Eviation states. “This new generation of aircraft has the power to transform communities by providing access to airports not currently used by commercial flights due to noise concerns or restricted operating hours.

With a focus on regional markets, Eviation is lining up its Alice electric aircraft to carry passengers and cargo in the relatively short range of 150 miles to 250 miles.

In addition to DHL, which ordered 12 Alice eCargo planes, the US companies Cape Air and Global Crossing Airlines have also placed orders for the passenger version.

Cape Air currently operates a fleet dominated by the 9-seat Cessna 402, recently supplemented by the addition of 102 11-seat Tecnam P2012 Travellers and the Britten-Norman Islander, which is used on shorter runways.

The company flies more than 400 regional routes daily in the US and the Caribbean. It anticipates that the addition of 75 Alice electric aircraft to the fleet will provide it with an aesthetic and sustainability edge over the competition.

“Alice can easily cover 80 percent of our flight operations, bringing sustainable, emission-free travel to the communities we serve,” explained Founder and Board Chairman Dan Wolf.

For Global Crossing, the Alice electric aircraft apparently represents an opportunity to move into the short-distance area, having already carved out a strong niche in long distance chartering with a fleet of Airbus A320 aircraft. The company will add 50 Alice 9-seat electric aircraft to its fleet.

If it seems that the electric aircraft field has been slow to take off, that is true. However, the industry is poised for rapid acceleration in the near future, at least in the area of smaller aircraft.

One of  the suppliers behind Alice is the startup magniX, which was selected by NASA last year as one of two firms to participate in the agency’s “Electric Powertrain Flight Demonstration” program. The program aims to kick the commercial development of electric aircraft into high gear (GE Aviation was the other firm).

“We expect to realize significant improvements in the economic and environmental performance of subsonic transports through incorporation of these novel alternative propulsion and energy technologies into the fleet,” added Robert Pearce, who is the associate administrator for the Aeronautics Research Mission Directorate at NASA Headquarters in Washington.

The EPFD program has a 5-year timeline, during which magniX and GE Aviation are tasked with collaborating on a number of systems in the NASA fold.

“These demonstrations will identify and retire technical barriers and integration risks. It will also help inform the development of standards and regulations for future EAP systems,” explained Gaudy Bezos-O’Connor, EPFD project manager.

Last spring, magniX also announced that it has enlisted the companies AeroTEC and Air Tindi to assist the electric aircraft collaboration with NASA. That part of the program aims at powering a hybrid De Havilland Canada Dash 7 through the air, so stay tuned for more on that.

This is all very exciting, except that electric propulsion will remain confined to small-capacity, short-range flights for the foreseeable future.

For long distance, high capacity flight, the zero emission all-electric future is a long way off. Meanwhile, biofuels, electrofuels, and other alternative, lower-carbon aviation fuels will have to fill the gap.

Don't want to miss a cleantech story? Sign up for daily news updates from CleanTechnica on email. Or follow us on Google News! Have a tip for CleanTechnica, want to advertise, or want to suggest a guest for our CleanTech Talk podcast? Contact us here.
In this article:AeroTEC, Air Tindi, Cape Air, Clean Tech, DHL, electric aircraft, Eviation, Eviation Alice, Global Crossing Airlines, magniX, NASA, usa