A plan to expand Interstate 25 through central Denver has officially been scrapped, and $100 million has instead been reallocated to Bus Rapid Transit (BRT) and other investments in walking- and biking-friendly projects that support healthier, more vibrant communities. Expansion of the highway was opposed by transportation and environmental advocates, as well as neighboring communities that already suffer from high air pollution and health impacts 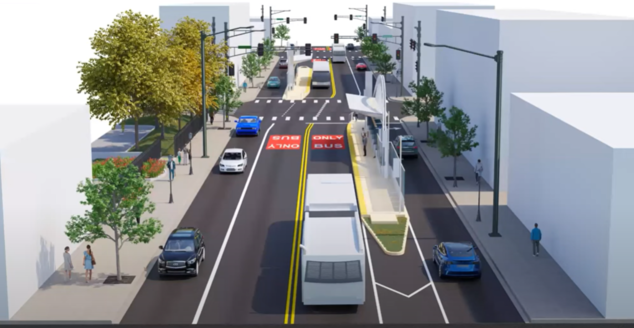 A rendering of potential Bus Rapid Transit in Denver, image courtesy of Denver Department of Transportation and Infrastructure

The decision to shift the state’s investment priorities comes on the heels of Colorado’s recently adopted greenhouse gas rule for transportation planning. The Colorado Department of Transportation (CDOT) had originally included two Denver-area highway expansions in its proposed 10-year plan — I-25 and Colorado State Highway 470 — but the department’s analysis showed that these and other road projects would exceed allowable pollution limits. By removing the highway expansion projects and shifting funds to invest in public transit, walking, and biking infrastructure, CDOT’s revised plan now aligns with the department’s greenhouse gas reduction requirements. The investments will also improve safety in the region and will greatly expand access to affordable and convenient low-carbon transportation options.

Colorado’s approach to aligning transportation investments with emissions reduction goals has positioned the state to influence a related federal rulemaking currently underway. This alignment is necessary to ensure that the national implementation of the Bipartisan Infrastructure Law supports the nation’s pollution reduction goals, and to ensure that the law’s more than $600 billion in transportation infrastructure investments do not further exacerbate past harms due to highway construction and expansion.

More details on CDOT’s revised 10-year plan and the greenhouse gas rule can be found in my earlier blog.

Featured Image Screenshot via Denver: Include Affordable Housing If You Want To Build Higher

Don't want to miss a cleantech story? Sign up for daily news updates from CleanTechnica on email. Or follow us on Google News! Have a tip for CleanTechnica, want to advertise, or want to suggest a guest for our CleanTech Talk podcast? Contact us here.
In this article:Colorado, denver