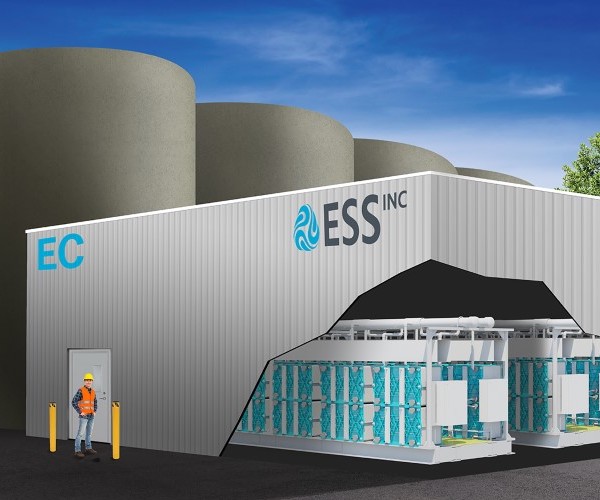 ESS is an Oregon-based company that manufactures flow batteries that rely on simple, abundant, and inexpensive materials — iron, salt, and water. The secret sauce is the membrane that separates the positively charged liquid from the negatively charged liquid. Last year, ESS entered into an agreement to supply SB Energy, a division of SoftBank, with 2 GWh of flow batteries by 2026. That was a big deal for the fledgling company, but because SoftBank is also an investor in the company, it wasn’t really a sign of full-fledged acceptance from the utility industry.

Last week, that changed when ESS and the Sacramento Municipal Utility District announced that ESS would supply SMUD with flow batteries with a total capacity of 200 MW/2 GWh beginning next year. The utility plans to be a zero emissions energy supplier by 2030 — one of the most aggressive carbon reduction plans in the industry and 15 years ahead of the target set by the state of California.

The addition of 200 MW/2 GWh of storage, when coupled with renewable energy sources, is equivalent to removing 284,000 metric tons of CO2 emissions per year and will provide enough energy to power 60,000 homes for 10 hours,

The deal contains a master supply agreement for ESS to deliver units over the course of the next few years, starting with several megawatts over the next 18 months. Then it will ramp up to tens of megawatts in the second phase and then potentially up to the 100 megawatt level. The multi-year commitment is meant to track the natural planning cycles of utility procurement and project development, Hugh McDermott, senior vice president of ESS, told Canary Media last week.

Until recently, lithium-ion battery storage was all the rage in the utility industry, but supply chain issues, skyrocketing prices for lithium, and the occasional battery fire have all conspired to encourage utility executives to consider alternatives.

“This is a very uncertain supply situation for the rest of this decade, for everybody,” McDermott said of the grid storage market. “[SMUD is] going to get certainty on supply — a major bonus — and they’re going to get a commitment that we’ll have the manufacturing behind that. We’ll get the visibility [to future demand] so we can plan our manufacturing expansion.” He added that the scarcity of battery materials is likely to continue for some time as demand for both electric vehicles and grid storage grows faster than new manufacturing capacity.

The agreement between ESS and SMUD also contains a unique workforce development component. ESS manufactures its storage technology near Portland, Oregon, but will work with local colleges and universities around Sacramento to train workers to install, commission, and service the units. “Right now, we’re the only people on the planet who know how to service our equipment,” McDermott said. ​“We need to build out those legions.”

Sacramento could become a hub for ESS installations in California, which is requiring utility companies to install long duration storage as part of its commitment to eliminate its reliance on thermal generation. Lithium-ion battery storage typically can only supply electricity to the grid for a maximum of 4 hours. Because of that, a recent Stanford study warned that charging EVs overnight will become impossible when those conventional baseload generating stations are decommissioned. But systems like those from ESS and Energy Dome could radically alter that situation.

Because ESS manufactures its products in the US, it stands to benefit from the energy storage tax credits contained in the Inflation Reduction Act. Developers can claim a 30% tax credit on battery projects built with prevailing wages, but they can get an additional 10% off by using domestic content. Very few energy storage manufacturers have production lines up and running in the US today, McDermott pointed out, so ESS expects to be one of the only suppliers to qualify for the domestic content credit in the near term.

The company will also be able to claim corporate tax credits based on the capacity of domestically manufactured storage products it ships to other countries. That’s valuable for companies that are scaling production to compete with lithium ion batteries which are getting the benefit of economies of scale from the ramp-up in EV manufacturing. “It’ll help us to achieve break-even profitability sooner in our scale-up than we were otherwise planning,” McDermott said.

While the rules and regulations to implement the IRA are still being written, that legislation by itself is already spurring companies like ESS and its potential customers to start talking about new business relationships.

Go With The Flow So how does a flow battery work, exactly? Iron flow batteries use three of the most abundant elements on Earth — iron, salt, and water. They consist of two storage tanks with a membrane between them. The membrane allows electrons to flow back and forth between the tanks while keeping the liquids separate. If that sounds easy, it’s not.

Getting the right mix of iron, salt, and water is critical, and creating a membrane that lasts a long time is no easy thing. ESS says its systems are expected to have a 25-year service life, which is longer than most lithium-ion storage batteries, although there is no long term data available yet on either system.

The ESS/SMUD announcement does not reveal any details on pricing. In theory, flow batteries should be less expensive than lithium-ion batteries, but they are just reaching commercial acceptance, so the inevitable economies of scale have not kicked in just yet. Most of the cost is in the membrane that separate the two tanks of liquid. One feature of flow batteries is if there is a need to increase capacity in the future, it is relatively simple to swap in larger tanks that hold more electrolyte.

Clearly, there is no one technology that meets ever energy storage need. Flow batteries are just beginning to be taken seriously. The trajectory for the technology should be straight up over the next few years, barring any unforeseen issues that have not become evident yet. Long term storage is enjoying the spotlight now as more people search for ways to replace the baseload “spinning capacity” that keeps the grid powered up overnight that often relies on nuclear or coal generation.

Don't want to miss a cleantech story? Sign up for daily news updates from CleanTechnica on email. Or follow us on Google News! Have a tip for CleanTechnica, want to advertise, or want to suggest a guest for our CleanTech Talk podcast? Contact us here.
In this article:California, flow batteries, Sacramento