Earlier this year, when gas prices went to record levels, it was hard to get ahold of an EV of any kind at dealers. People realized that oil companies had them by the shorts, and you can only adjust your household budget so much before the gas man is taking money that should have gone to the grocery man. But, feeling public pressure, governments and industry took action to get prices down again.

If you’re one of the people who was thinking of going electric earlier this year, but decided not to, I’ve got bad news. A recent post over at Jalopnik tells us that three months of dropping gas prices has come to a halt in the last few days, and prices are starting to go up again. Instead of steady but small price drops like we’ve seen for the last 99 days, the US national average crept up again putting the average at $3.68 per gallon for regular unleaded (as of September 21st).

What makes this particularly sad is that prices are still high. Compared to what we all saw in June, with averages of over $5 a gallon and much higher prices in California, paying an average of $3.68 doesn’t sound that bad at all. But, think back to what it cost to buy gas a year ago, and you’ll go back to being annoyed by it if you’re still relying on the stuff for your regular commute.

Prices are still over $5 per gallon in the highest priced states, and at its lowest, it can be had for just over $3.

While the dropping prices have come to a halt, we can’t predict what will happen next. Futures trading shows that there’s expectation of continued reductions in prices, so this may be a temporary and small rise that could be followed by gas continuing to get cheaper. But, oil and gasoline are subject to market forces, the actions of cartels, geopolitics, and many other factors that we can’t control or predict with any real degree of accuracy.

If history is any indicator, we can expect continued volatility, as shown in this price graph by the US Department of Energy’s Alternative Fuels Data Center: As you can see, gas and diesel prices, on a per-mile (gasoline-gallon equivalent) basis, swing wildly. Electricity prices, on the other hand, are only subject to very mild and predictable seasonal ups and downs. Plus, the prices have always been lower per mile than gasoline even during times when gas was at its cheapest.

So, if you’re still depending on gasoline or diesel for your transportation needs, you and your family have two choices: stay on the gut-wrenching budgetary roller coaster where you’re guaranteed to keep paying more, or take action and get the Saudis, OPEC, climate-denying domestic producers, and other thieves out of your pocket.

Even if gas prices resume going down in the next few months, they’ll never get cheaper than electric and they’re guaranteed to swing up again at some point in the next few years. Over the life of a car loan, there’s no way that’s not going to happen again at least once.

Featured image by the US Department of Energy, AFDC.

Don't want to miss a cleantech story? Sign up for daily news updates from CleanTechnica on email. Or follow us on Google News! Have a tip for CleanTechnica, want to advertise, or want to suggest a guest for our CleanTech Talk podcast? Contact us here.
In this article:gas prices, US In 2021, 20% Of Electricity In The US Was Generated From Renewable Sources

Due to the rise in electricity generated from wind and solar, 20% of electricity net generation in the US came from renewable sources in... 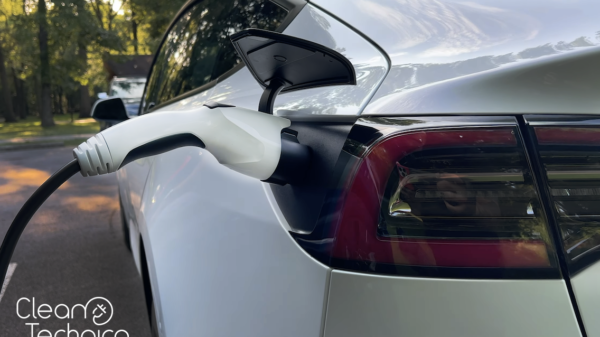 Federal Progress On EV Charging In 2022

As we bid farewell to 2022 and look forward to 2023, I’ve been reflecting on progress made in the past year, particularly in the...