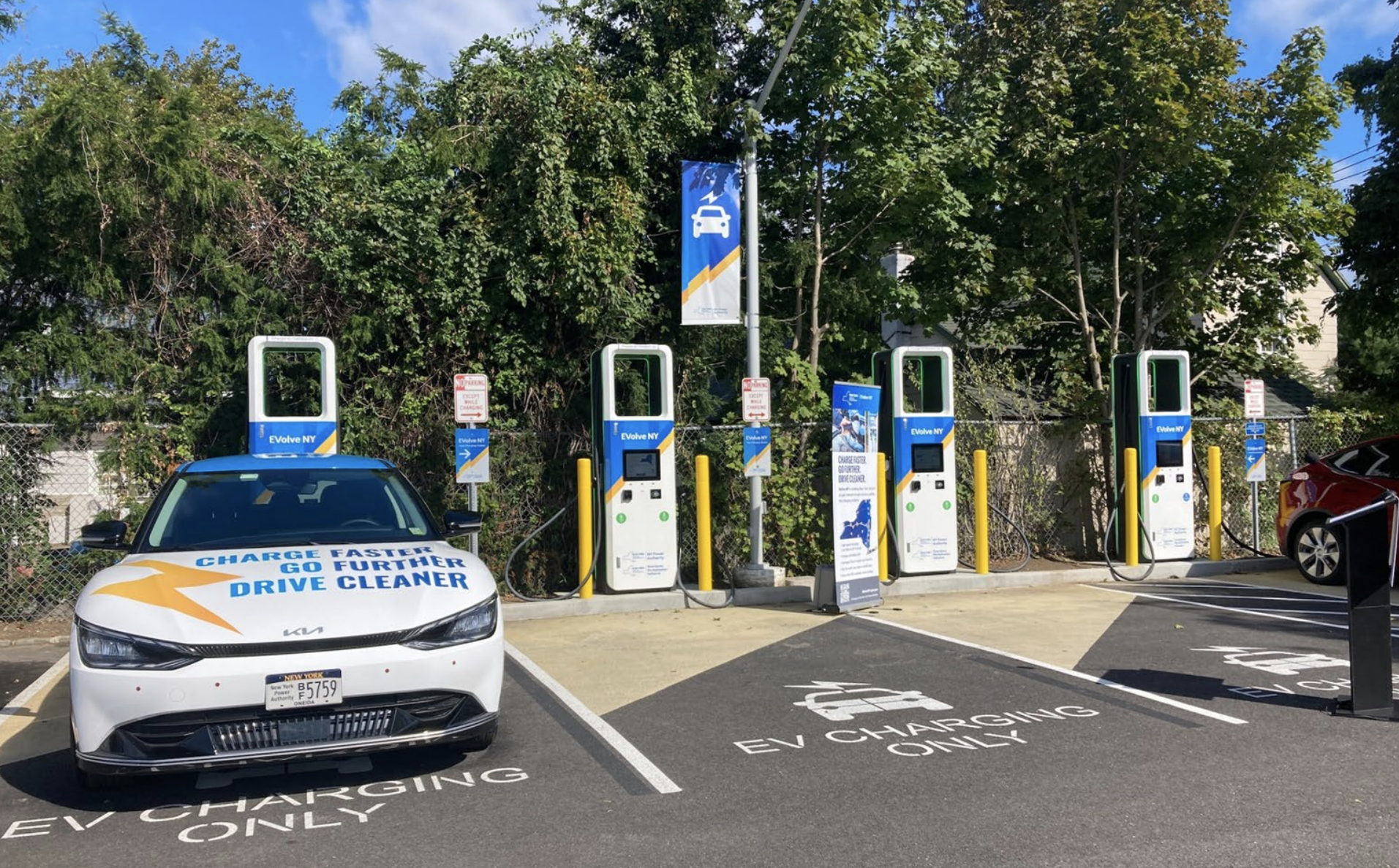 “With over 100 Evolve NY high-speed chargers across the state, New York has cemented itself as a leader in advancing clean transportation and curbing emissions from the transportation sector — the largest source of greenhouse gas emissions in the nation,” Governor Hochul said. “The latest three chargers coming to Long Island, which has more EV drivers than anywhere else in the state, mark our progress in building the necessary infrastructure to support our transition to electric vehicles in the battle against climate change.” According to EvaluateNY, Long Island accounts for almost 30 percent of New York’s EV ownership with 32,090 vehicles on the road, a higher percentage than any other region of the state. More than 26 percent of the current public and private 1,020 DCFC fast charger ports in the state are sited on Long Island. EVolve NY’s expansion onto Long Island will provide even greater access to EV charging for Long Island residents.

EVolve NY chargers are now operational at a shopping center at 656 Commack Road in Commack and a municipal-owned parking lot at 209 East Ave. in Riverhead. Chargers at a Bridgehampton municipal lot at 99 School Street is expected to open in late October. A total of 140 EVolve NY fast chargers are expected to be available across the state by the end of the year. The four direct current fast chargers (DCFC) located in both Riverhead and Commack can charge any make or model of EV to 80 percent in as little as 20 minutes. The charging stations are equipped with fast-charging connectors that enable all electric vehicles, including Tesla cars with an adapter, to plug in. The Riverhead and Commack fast charger blocks are powered by PSEG Long Island, on behalf of the Long Island Power Authority. Riverhead also has four public Level 2 chargers, which can be used for charging during a longer stop. The Commack chargers are the first fast or Level 2 chargers in the hamlet.

The installation of the Riverhead chargers—located downtown at 209 East Avenue—is a site identified through the Department of State’s Downtown Revitalization Initiative (DRI). The program builds on public and private investments to create vibrant downtown business districts. Riverhead is one of six cities deploying EVolve NY chargers in concert with the DRI program to make EV driving a more accessible option for more local residents and all New Yorkers while also supporting economic development in downtowns across the state. The multi-agency program, dubbed DRIve EV Downtown, includes other DRI locations that have installed EV fast charging, including in Amsterdam (Montgomery County), Geneva (Ontario County), Middletown (Orange County in the Hudson Valley), Utica (Oneida County), and Oswego (Oswego County).

New York Power Authority Interim President and CEO Justin E. Driscoll said, “As a first mover in the EV charging space, NYPA is laying the foundation in a rapidly growing industry, installing high-speed chargers throughout the state in an expedited, tech-savvy, cost-contained way. Surpassing 100 chargers solidifies the backbone of our state-wide network and inspires even more investment in our original goal of helping to electrify travel along New York’s major travel corridors. EV use is skyrocketing on Long Island and NYPA is proud to help make EV driving easier.”

New York Secretary of State Robert J. Rodriguez said, “This milestone represents the State’s leadership in making a cleaner greener New York. Decarbonizing downtowns and investing in climate-friendly infrastructure is an important building block for downtown revitalization. New Yorkers are returning into more vibrant and reimagined downtowns and making them more resilient is a DOS priority.”

Chief Executive Officer of the Long Island Power Authority Thomas Falcone said, “Congratulations to NYPA on their milestone of 100 fast EV chargers, as well as for launching the first three EVolve NY fast chargers on Long Island. With EV chargers becoming more readily available, public interest in the technology will only increase and put us on the road to success in meeting New York’s clean energy goals. We look forward to continuing to work alongside our partners at NYPA to do all that we can to encourage the adoption of EVs across our region through education and incentives.”

Riverhead Town Supervisor Yvette Aguilar said, “Charging stations, such as these EVolve fast chargers, help comprise the bolstering of Downtown Riverhead’s overall infrastructure, which is critical to the overall revitalization and resurgence of our downtown. As more and more New Yorkers make the switch to electric vehicles, the availability of these chargers will unquestionably become more prevalent.”

President and CEO of Electrify America Giovanni Palazzo said, “We are excited to celebrate New York Power Authority’s milestone of more than 100 chargers in its EVolve NY charging network. Through our continued collaboration, Electrify America is helping NYPA to advance electric vehicle mobility for all in the state of New York.”

Director of Energy Efficiency and Renewables at PSEG Long Island Michael Voltz said, “PSEG Long Island congratulates NYPA on this exciting milestone. We were pleased to work with NYPA to come up with a mutually agreed upon design for connecting the fast EV charge station to the electric grid to supply fast, reliable power to EV owners looking to quickly charge their vehicles. Long Island has the highest percentage of electric vehicles per total car ownership of any area in New York State, and we are excited for additional EV stations coming into our region.”

Chairwoman of Drive Electric Long Island Marjaneh Issapour said, “Drive Electric Long Island commends NYPA on its Evolve NY fast charging program to make EV charging fast, affordable and convenient here on Long Island and throughout New York. Our goal is to accelerate and encourage the adoption of EVs and additional charging infrastructure through advocacy, education and outreach. The Evolve NY network makes accomplishing that much easier and responds to the needs of Long Island EV drivers. With Long Island boasting 30 percent of the EVs in New York State, our drivers definitely need more charging options. We are proud to celebrate the 100th EVolve station here in Riverhead and the addition of Commack and Bridgehampton to the network.”

New York State has a goal of reaching 850,000 zero-emission vehicles by 2025, and for all new passenger vehicles to be zero-emission by 2035. New York is rapidly advancing these goals through a range of initiatives including EV Make Ready, EVolve NY, the Drive Clean Rebate, the New York Truck Voucher Incentive Program (NYTVIP) and Charge NY. These efforts contributed to a record increase in the number of electric vehicles sold in New York in 2021, bringing the total number of EVs on the road as of September 2022 to more than 114,000, and the number of charging stations in the state to more than 10,000, including Level 2 and fast chargers.

Official news from the Office of the Governor.

Don't want to miss a cleantech story? Sign up for daily news updates from CleanTechnica on email. Or follow us on Google News! Have a tip for CleanTechnica, want to advertise, or want to suggest a guest for our CleanTech Talk podcast? Contact us here.
In this article:Climate Week, EV fast chargers, EVolve NY, Kathy Hochul, New York, New York Power Authority