For those of us who don’t own our home, it can be challenging to electrify. Installing EV charging, putting in rooftop solar, changing out your heater, stove, and water heater, and many other things just aren’t going to happen because the owner won’t spring for the upgrades to save you money and lower your carbon footprint.

But, buying a home is only half the battle. Many homes just aren’t set up to use electricity for everything, because the designers and builders assumed that the people who lived in it would use gas or heating oil for some things forever. When you go to adopt cleaner electric appliances and HVAC systems, not to mention EV charging, you can quickly run into the limits of not only your home’s wiring, but the wires coming from the power company.

Those of us who have overcome this problem to install EV charging know that this isn’t a cheap thing to fix. You’re talking thousands of dollars to upgrade your electrical service, home wiring, and more just to make sure your EV gets a full charge every night.

With most of the attention on the Inflation Reduction Act’s EV tax credits and point of sale rebates (and the problems with them), many people didn’t notice that the spending bill also did something else that was really cool to help not only EV charging station installations at home, but also help electrifying the rest of your home.

HEEHRA To The Rescue

Does your home have older wiring that only provides 50, 70, or 100 amps of power? The new law starts by offering up to $4000 off the cost of upgrading your utility service and main breaker box. For some people, that’ll cover the entire cost of upgrading to 200-amp service. That alone is a huge deal, especially for low-income homeowners who wouldn’t otherwise be able to do that.

The bill doesn’t stop there. If other parts of your home need upgrades to support clean energy upgrades, the bill offers up to $2,500 in rebates for that. This will help or even cover the cost of running a new wire to your kitchen for an electric stove, or to your heater and air conditioner. 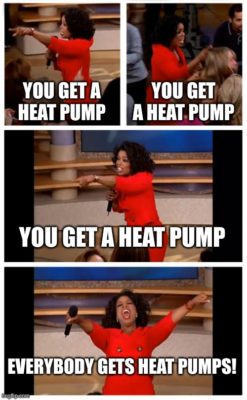 The “you get a car” meme from that Oprah episode where she gave everybody a car. Fair use.

Speaking of those things, the bill also helps upgrade your home’s key mechanical systems to be more energy efficient and run on electricity. The bill provides up to a whopping $8,000 to change to a heat pump HVAC system that provides both winter heat and summer air using less electricity than other systems out there. That alone is going to get rid of a lot of methane and heating oil use around the United States.

To be honest, just writing about this makes me feel like Oprah Winfrey, but instead of cars, I’m telling everybody that they get a bunch of heat pumps. Which is very cool.

But, the new law doesn’t stop with putting a bunch of heat pumps in your house. It also goes into your kitchen (but only if you want that) to help you get rid of that gas stove and oven. Just like with the dryer, you can get up to $840 to cover the cost of switching to an electric oven and stovetop that you already got help getting wiring upgrades to support. Nice!

With all of this efficiency, some readers are probably wondering if they can get help having a contractor help seal up the little air leaks in their home or upgrade the insulation a bit to help save energy the old-fashioned way. You guessed it: HEEHRA has your back there, too. It provides up to $1,600 of help for those sorts of upgrades.

If all of this sounds like a great thing, don’t rush out and get a contractor to do any of this work today. The program won’t start until 2023, and even then, it’ll be distributed to contractors and appliance businesses through state governments. We don’t have the full details today on how to get those rebates yet, and it’ll definitely differ from state to state.

The program lasts for ten years, but the funding isn’t unlimited. So, keep an eye out for HEEHRA news and be sure to jump on that as soon as you can so the money doesn’t run out before your home gets those important upgrades.

About the only thing the program doesn’t do is cover the cost of adding solar+storage to your home, but it lays the legwork for getting the most from that. So, take advantage of it, even if you plan on going solar at some point. I’m guessing that the smarter solar installers are going to figure out how to get you these rebates and include them in a whole package that includes solar, storage, and clean energy upgrades.

You can find a lot more information about HEEHRA here.

Featured image: my take on the popular “You get a car!” meme. Fair use.

Appreciate CleanTechnica’s originality and cleantech news coverage? Consider becoming a CleanTechnica Member, Supporter, Technician, or Ambassador — or a patron on Patreon. Don't want to miss a cleantech story? Sign up for daily news updates from CleanTechnica on email. Or follow us on Google News! Have a tip for CleanTechnica, want to advertise, or want to suggest a guest for our CleanTech Talk podcast? Contact us here.
In this article:High-Efficiency Electric Home Rebate Act, Inflation Reduction Act of 2022